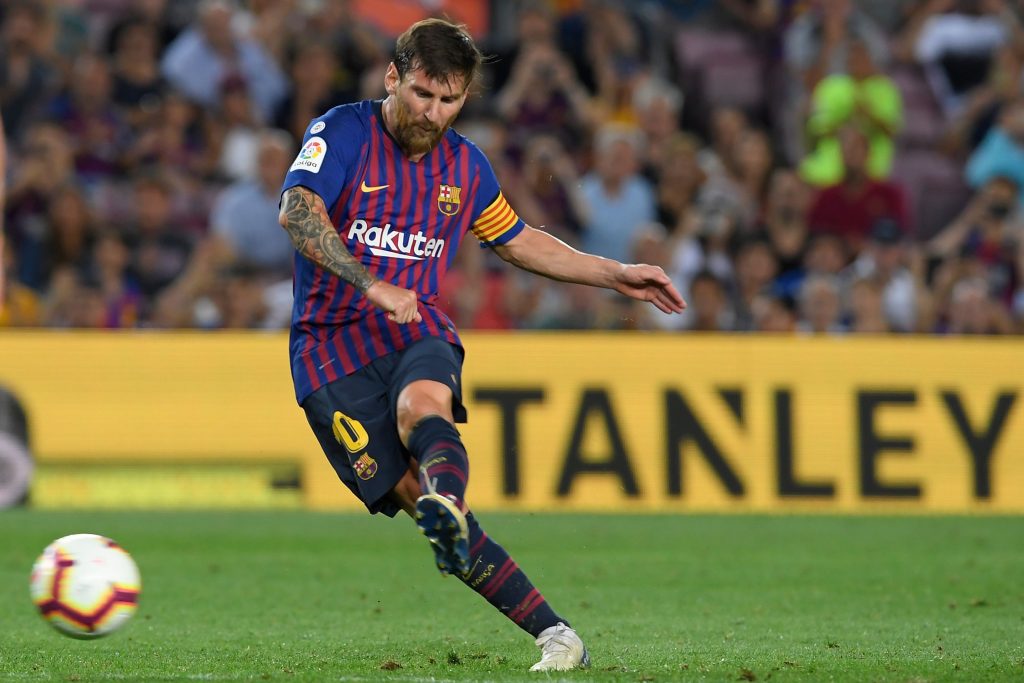 An analysis of how Lionel Messi overtook his rivals to become the undisputed best freekick taker in the world.

When Messi goes to take a free-kick, we are already thinking about the celebration.

Leo Messi is the best freekick taker in the world. But he wasn’t always. This article will analyze the science behind his freekicks, his style and how exactly he, more than doubled his number of successful freekicks per season, over time.

Let’s take a look at the numbers

Here is a graph that shows the amount of free-kicks Messi has converted per season. A staggering increase. From scoring one free-kick the entire season to scoring nine (15/16). Messi has an average of 7.25 freekick goals per season in the previous 4 complete seasons, compared to a 1.65 free-kicks goals per season in his first 4 complete seasons since converting his first-ever free-kick. Messi has made 4 freekicks during the 19/20 season, which at the time of writing, is on an indefinite hiatus due to health regulations regarding the COVID-19 pandemic.

Time for another absurd chart.

This chart shows the amount of goals scored by different entities over the last 8 years. All of the ‘entities’ are clubs, except for one. Lionel Messi isn’t competing with players anymore, he’s competing with teams. Over the last 8 years, Messi has converted the most free-kicks out of every club in the world. Taking this insane statistic even further, over the last 5 seasons Messi has scored the most free-kicks (obviously) with 22, while Juventus is in second with 15 free-kick goals. There is a difference of 7 free-kick goals between an individual in the first place and a team in second place.

Messi’s leg when taking a free-kick has an angle of 50 degrees. He places almost his entire boot on the ground before hitting the ball, giving him stability, balance, and control in the shot.

To improve his accuracy, he arches his shoulder and chest to caress the ball, hunching his body to a more appropriate and compact position.

SPORT asked professionals and experts in the field about his free-kick genius. The Department of Physics at the University of Barcelona stated that he uses the Magnus Effect to consistently put the ball at the back of the net from a set-piece.

How Messi improved his free-kicks

So finally… how did Messi improve his free-kicks? Practice. Practice. Practice. The exponential increase in the number of free-kicks converted per season completely obliterates the baseless and incorrect myth that ‘Messi is all talent and no hard work!’. If you are average at free-kicks, you don’t just magically wake up one day and develop a better technique without putting work into it. Messi put work into it.

A report by MARCA states that Messi his way of hitting a ball in training early on, using plastic dolls as a barrier between him and the goal.

I have stayed back many times after training to practice my free-kicks.
– Lionel Messi

“You get used to shooting in a specific way and discover your best form. In the end, everything is training and practice”, Messi explained in the report. He also emphasized the importance of practicing and watching and studying everything there is study so that nothing is left to chance.

By staying back late after training, practicing and watching – is how Lionel Messi improved his free-kicks. Messi also spoke to ESPN about his free-kick style.

I like to hit the ball over the players’ wall but from time to time I like to mix it up a bit to confuse the goalkeeper.
– Lionel Messi

Messi’s free-kick style isn’t unique. What’s unique is how consistent he is with emulating that same style. Sometimes, most times – the goalkeepers actually know on what side of the net the ball will go to and yet they can’t do anything about it.

More training and more determination are what has led to more free-kick goals. When you combine a freak of nature and an extremely hardworking machine, you get Lionel Messi.

Is Messi the best in freekick taker in history?

Messi is the best player in history but he is also the best freekick taker I have ever seen.
– Lucos Olaza

Let’s do some math.

Messi currently averages 7.25 free-kicks per season (based on the 15/16, 16/17, 17/18 and 18/19 seasons. Messi’s most recent seasons with the most similar free-kick tallies). Assuming that Messi plays till 2023, and scores an average of 7 free-kicks per season (can be astronomically higher or even lower), he’ll score 21 free-kicks over the course of the next three seasons (excluding the current, 19/20 season). That will take his free-kick count to 73 free-kicks. Juninho’s free-kick count is 77. The calculated 73 free-kicks does not count the number of free-kicks he could still make in 19/20 (when and if the season is resumed), so if Messi scores 4 more free-kicks this season, or has anomalous seasons in which he scores more than the predicted 7 free-kicks, he could make history and claim the throne as the player with the most free-kicks ever.

On one hand, it seems extremely difficult and practically impossible to get those kinds of numbers in that kind of time, but on the other hand, it’s Lionel Messi we’re talking about, what is impossible to him?