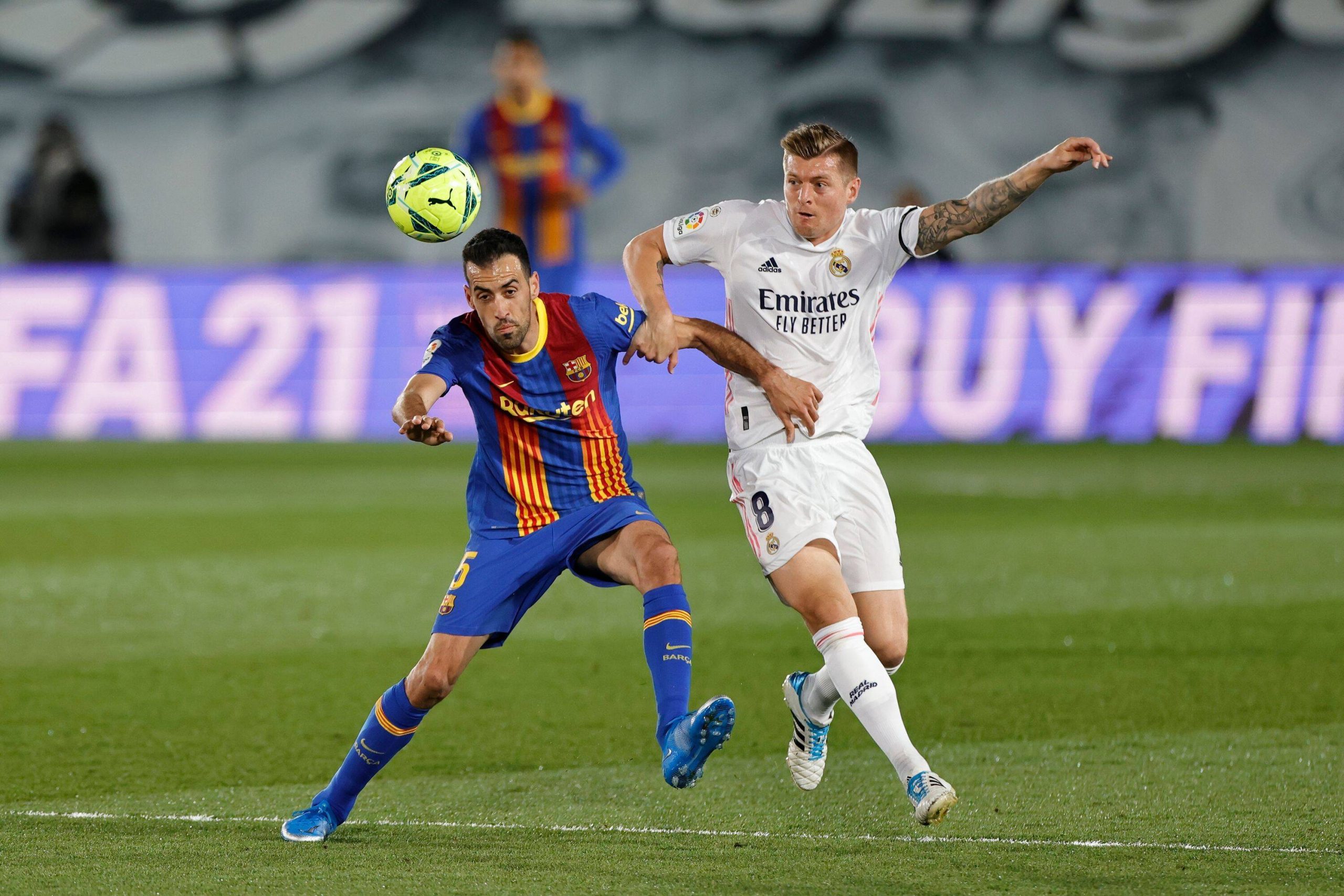 Barcelona had the chance to go on top of the La Liga table yesterday had they beaten Real Madrid in the second El Clasico of the season. Alas, it was not to be, as the team’s first half display allowed their rivals to walk over them. The race for the La Liga crown is in full flow now, with Real Madrid sitting on top with 66 points, Atletico Madrid with 66 in second, and Ronald Koeman’s Barça in third with 65.

Barça Universal brings forth five crucial moments that defined the game yesterday – a nervy, nail-biting affair that went on till the very last minute.

Right from the get-go, there was something different about Zinedine Zidane’s Real Madrid yesterday. He had not lined up the team in a 4-3-3, or a 3-5-2, but a 4-4-2. Federico Valverde assumed his position on the right side of the midfield, almost acting like a wingback out of possession.

Lucas Vazquez tucked in to form a five-man backline, with even Karim Benzema a part of the first layer of defence, in what looked like a truck parked in front of the box. Madrid were able to absorb pressure and hit Barça on the counter, which worked to perfection.

El Clásico has, for years, seen contentious refereeing. Yesterday was much of the same, as Gil Manzano displayed his incredible incompetence with the whistle. It started with a possible foul on Messi, which was not given, eventually leading to Madrid’s goal in the same move. Madrid were then awarded a set-piece for a similar foul, which was converted by Toni Kroos.

If that was not enough, Barcelona had three penalty calls, which included Casemiro stepping on Clement Lenglet’s foot, Ferland Mendy tripping Ousmane Dembele, and then Mendy grabbing Martin Braithwaite’s arm inside the box. All calls were deemed too soft for penalties.

The cherry on this awful cake was the four minutes added on in the end. Four minutes for a half that saw a red card, nine substitutions, one goal, six corner kicks, three yellow cards, and the referee going to fix his gear.

There were several occasions where Barcelona came awfully close to scoring yesterday, but probably the closest, apart from Oscar Mingueza’s goal, was when Leo Messi curled the corner into the box, and struck the frame of the goal.

Courtois’ face when Messi tried to beat him direct from the corner 🤣 pic.twitter.com/39uE0VHlzl

That was probably the closest Messi got to scoring himself on the night, after being locked down by the Madrid midfield. Without a proper number 9, it is too easy to stop Barcelona from scoring with Leo Messi locked down.

Oscar Mingueza was, without a doubt, the best performer on the night for Barcelona. He closed down Vinicius Jr. impressively in the first half, and came up with the goods in the second half with a goal. Jordi Alba’s cross was brilliantly dummied by Antoine Griezmann, and Mingueza made no mistake to slide it home from close range.

He played throughout the 90 minutes, and was running till the very end, covering multiple positions and for multiple players. The captain’s armband awaits.

5. Moriba’s strike on the crossbar

Barcelona continued to fight till the dying minutes of the game, and won a free kick inside their half with a handful of seconds on the clock. Marc-Andre ter Stegen rushed out to join the attack, as well. The ball was played perfectly inside, headed towards Ilaix Moriba, who didn’t think twice before lashing out a volley that bumped the crossbar.

The ball flew towards an unmarked ter Stegen, who had nothing but the ball in his sight. Fransisco Trincao, for some reason, rushed in as well, and blocked the shot-stopper’s powerful volley which could have been, very well, on its way to goal. Two moments of what could’ve been in the dying minutes.