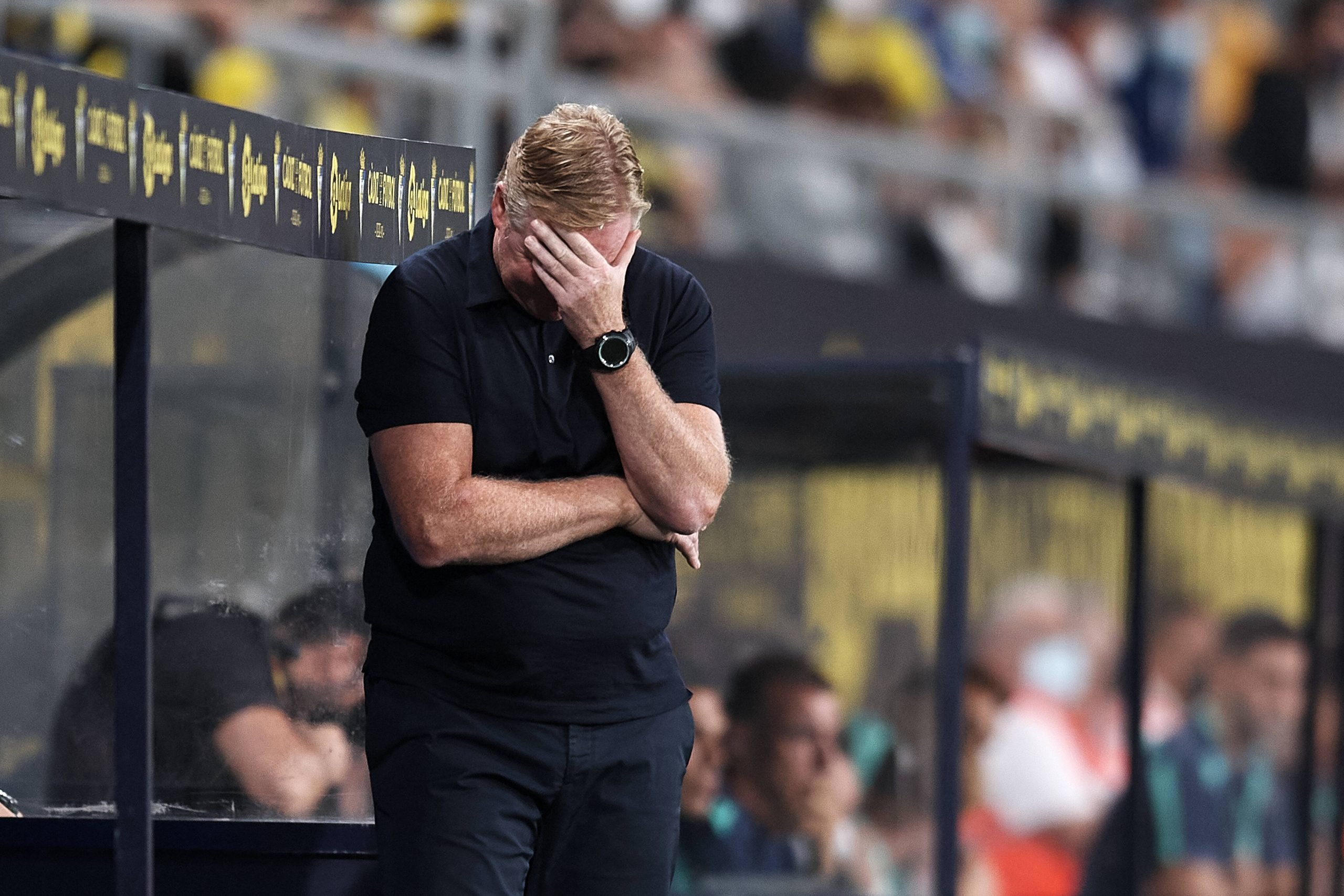 The fifth game of La Liga took Barcelona to Estadio Ramon de Carranza as the blaugranas took on Cadiz. Alvaro Cervera’s side were on five points in as many games ahead of the clash with one win, two draws and two losses under their belt.

The draw at the Ramon de Carranza means that Barcelona are 7th in the league standings with a game in hand.

Ronald Koeman surprised many with his lineup as he put forward some interesting choices. Gerard Pique replaced Eric Garcia in the heart of defense from the previous game to provide Barcelona with another target man in attack. Oscar Mingueza started at right-back, and Sergi Roberto was replaced by Gavi in midfield. In attack, the Catalans put forward the trio of Luuk de Jong, Memphis Depay, and Yusuf Demir.

The Catalans started the game brightly, holding onto the ball and playing through the Cadiz press. Sergino Dest fancied a shot on goal as early as the third minute but unfortunately skied the effort.

Barcelona took a short corner in the eighth minute and then brought up the first real chance of the game. Memphis Depay created the opening via a beautiful cross into the opponent box, but no one could finish the chance.

From the 10th minute, the hosts slowly began to find their feet again. Cadiz created their first threat in the 14th minute when Alvaro Negredo connected with a cross. The striker could not find a sweet connection and squandered the chance.

Just in the next minute, Demir found himself free on the counter, running towards the Cadiz goal. However, his effort was well intercepted.

Barcelona continued to dominate the proceedings once again, and the crosses flowed into the Cadiz box. Memphis once again delivered a perfect ball but it was blocked by Ledesma.

In the 21st minute, Frenkie de Jong was denied a beautiful pass by the well-oiled Cadiz defense. Minutes 25-30 presented a period of high pressure from Barcelona, however, the hosts soaked it up and did not let it get the better of them.

Depay made a terrific solo run in the 31st minute. His shot was weak and easily saved by Ledesma. Frustration for the visitors began to pile up as they seemed helpless in attack and were unable to create concrete goalscoring opportunities.

Fali of Cadiz went down in the 38th minute due to injury. He had to be taken off two minutes later and was replaced by Jens Jonsson. Alvaro Cervera’s side finally created some active play from the corner in the dying minutes of the first half. However, Tomas Alcaron’s effort was cleared to safety.

Three minutes of added time did not see much action. Depay once again tried to find his teammates via an aerial ball, but was outdone by Ledesma again. As the teams headed into the dressing room at halftime, Cadiz were definitely the happier of the two because though they didn’t create chances of their own, they had frustrated Barcelona but not giving the visitors any breathing space.

Ahead of the second half, Koeman made a change by taking off Demir for Sergi Roberto. The first chance of the second period came for Alvaro Negredo of Cadiz as he took a lovely touch at the edge of the box. He went for the straight kill to the top right corner, but Ter Stegen made a diving save.

It was in minute 52 that Barcelona had their opening chance of the second half. Memphis Depay took a shot from the edge of the box after receiving a clever ball. However, Ledesma once again came up trumps with a diving save. Two minutes later, the Dutchman fancied a shot again, but it was again intercepted by the Cadiz defense.

Santiago Arzamendia was replaced by Alberto Perea and Alvaro Negredo by Choco Lozano at minute 59. In the same minute, Frenkie de Jong and Memphis combined to create a golden chance that was let down by a poor touch.

Frenkie de Jong was shown yellow in the 61st minute for a clear foul. Four minutes later, the Dutch midfielder was shown a second yellow after a reckless challenge and received his marching orders. Barcelona were reduced to a numerical disadvantage for the rest of the game.

In the 68th minute, Philippe Coutinho came on for Luuk de Jong and the side transitioned to a 4-4-1 with Depay up front. Four minutes later, Gavi was taken off for Nico.

Cadiz grew into the game and sensed blood for the taking soon after de Jong’s red card. In the 74th minute, Ruben Sobrino had a wonderful chance, but his header went above the crossbar.

Sergino Dest came off for Riqui Puig in the 80th minute, and the incoming youngster almost leaked a goal with his first touch. Salvi Sanchez had a chance on a platter after Puig lost the ball, but Ter Stegen made a sensational save to deny the Spaniard.

Cadiz created chance after chance with the next one coming off a cross from Alberto Perea. Barcelona seemed to be going for the draw, with no real efforts to create chances and score. The Catalans won a freekick in the 88th minute, but Coutinho produced a disappointing direct effort that wasted the chance. The subsequent freekick effort was better, but wide again from the Brazilian.

Five minutes of added time were announced, and Cadiz fancied a winner in the dying minutes. Barcelona had a golden chance in the 92nd minute when Coutinho sent in a sensational ball to Memphis. The Dutchman could not head it into the back of the net.

Cadiz had a brilliant opportunity at the other end and squandered it before Gerard Pique laid off Memphis again in the Cadiz box. Once again, the forward’s finish was just off. Ronald Araujo put up a wonderful challenge to stop Salvi’s counter, and Busquets was booked for a challenge. In the 96th minute, Ronald Koeman was sent off for protesting too much. The game ended with a superhuman save from Ter Stegen to keep the score at 0-0.