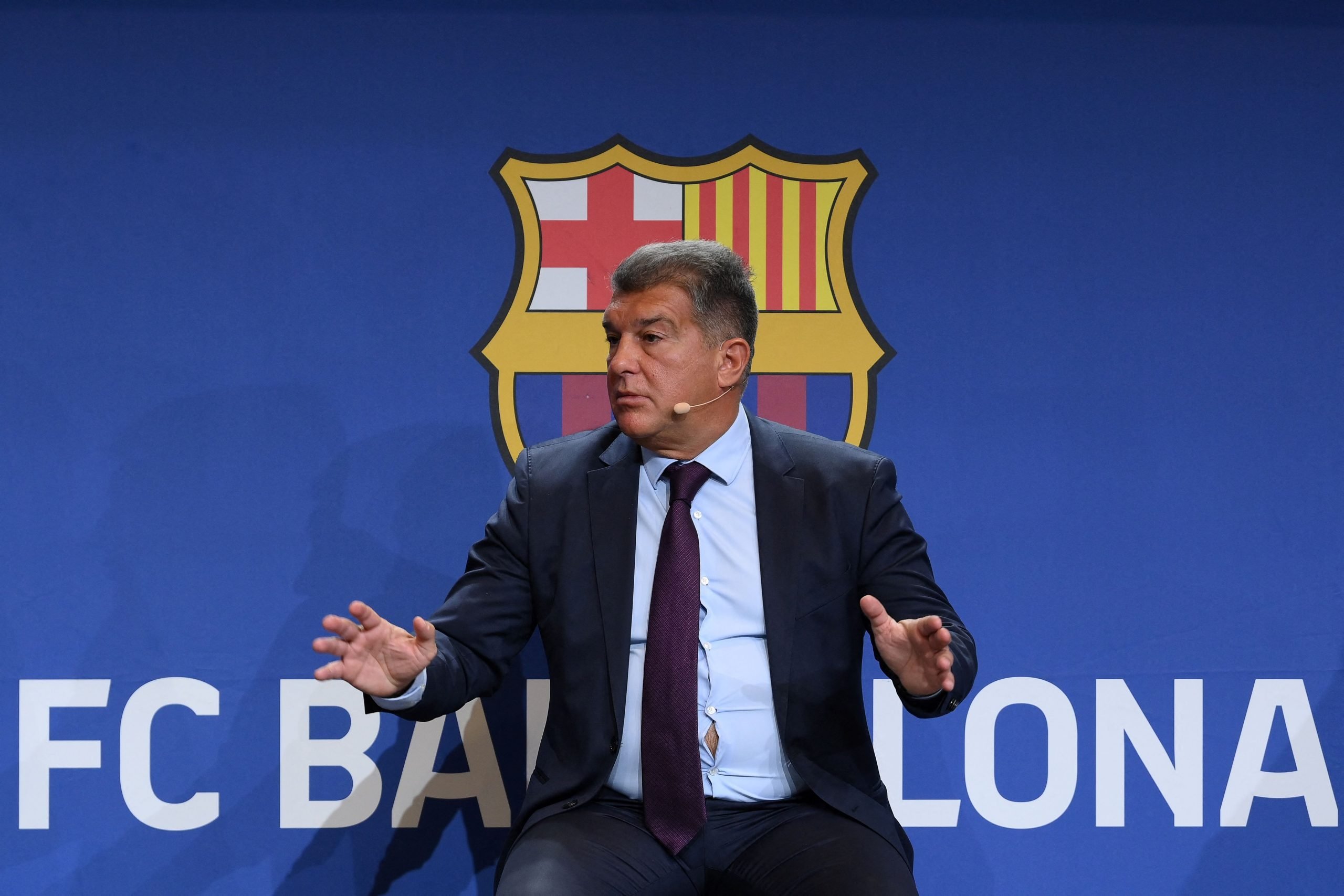 Barcelona president Joan Laporta sat down for a detailed interview with Cat Radio during which he discussed a wide range of topics starting from the club’s financial situation heading into the summer transfer window to transfer targets such as Robert Lewandowski.

Kicking things off, the Barça supremo was quizzed about the meeting he had with Valencia officials Anil Murthy and Joey Lim, during which the Catalans were offered a chance to sign Carlos Soler and Jose Gaya in a deal worth €60 million.

Talking about the meeting, Laporta said: “We had lunch with them and we talked about subjects that interest us.” When pushed if it was to discuss the transfers of Soler and Gaya, he replied: “I won’t say what we talked about. But we didn’t just talk about sports topics.”

The Barça president then spoke about how the season had panned out for the club, saying: “Considering the circumstances, I think the season is ending in a satisfactory but we want much more.”

Laporta insisted he believed that the team could have done better if not for injuries. “I think we should’ve won the league last season. This time the feeling is different. This year, with Xavi, we won the games we wanted to win.

“At times we were very good and consistent. Excluding some injuries, we would have finished better,” he said.

When asked if the team was overdependent on Pedri, he pointed out there were other injured players as well, saying: “There is also an imbalance in the squad. There were also other injured like Piqué, Ansu…”

Speaking about how the season had started and ended under different managers, he added: “Losing always has consequences. There were some unnecessary losses this season and then we changed coach. Since then, we have won a lot and finished second.

“Obviously, we always want more. I know the risk of being optimistic but it is also a sign of ambition. The message goes to the fans, to the locker room too.”

The conversation moved to transfer plans and strategies and the first question that Laporta was asked was if Barcelona were signing Robert Lewandowski. In reply, the president said: “We have to consider our financial situation. But Jordi, Mateu are working at it.

Laporta was asked about the rumours of Frenkie de Jong set to be sold in the summer. Addressing the speculations, the president insisted that whatever will be done will be in the best interests of the club, before adding that Xavi, along with Jordi Cruyff and Mateu Alemany will make the decisions.

“Let the sports department work. We will do what is best for the club. If we can manage to sign the economic deals, we can do what we want. Xavi decides everything along with Mateu and Jordi.”

Continuing, he added: “There are Barça players who are wanted by clubs on the market. We will do what is best for the club. If the economic levers we want to activate aren’t activated properly we will have a difficult time in the market.”

On Ousmane Dembele’s contract situation, the club president said: “I think he wants to stay but there are other very tempting offers that are better than ours. We have already presented an offer to Ousmane, we expect the answer at the beginning of the week.”

“We made an offer because Xavi, and myself too, love Ousmane,” he added.

Another player whose contract expires in the summer is Dani Alves, although Laporta insisted that a short-term deal could be in the works for the 39-year-old.

“He has fulfilled all his objectives. Now we’ll talk with him and decide. Dani wants to play in the world cup. With the behavior he has, the level he is at right now and the amount of experience he has, it is possible that he extends for 6 more months. We will see.”

The Barcelona president also made a startling revelation about the wages that PSG superstar Kylian Mbappe, who will be a free agent this summer, demanded, saying: “We would never consider signing a player who asks for €50 million net salary per season.”

Talking about the contract situation of midfield prodigy Gavi, Laporta added: “The technical department is working at it, he has offers. We are waiting for him to respond positively to ours.”

Laporta also spoke about Gerard Pique and his importance to the team, while also touching upon his recent controversy involving the RFEF and the Spanish Super Cup.

“Piqué had a great season. With him, we would have finished better, just like we would’ve if we had Pedri,” he said.

“It is true that he has a life linked to the business, it’s true and we will talk about it if there is an incompatibility, but for the moment, there is not. His loyalty for Barca is undeniable,” Laporta added.

The last summer window was severely hampered due to the club’s dire financial situation. However, Laporta expects things to be smoother this time out as the Catalans are working to close several deals which could put them in a good position.

“If we can sign the deals we want before June 30, we will have achieved something exceptional. The club had a net debt worth -€451 million when we arrived. We hope to improve the situation regarding this aspect,” he said.

“There are brands, investors who want to invest in our club,” he then added.

There have been talks about Barcelona selling a 49% stake in Barça Licensing and Merchandise (BLM) for a sum of €200 million.

Responding to those speculations, Laporta said: “The figures are not accurate but we have offers. It’s advanced. We have a firm offer but it has to pass in the assembly.

“The offers received for BLM are really very good but we must adjust them according to our interests. We value BLM highly, the offers we have so far received are good but we do not like some aspects. We have to negotiate,” he added.

Further continuing, Laporta said: “We also have other proposals that can improve our financial aspects. The figures are not yet satisfying. But we are in negotiations.”

“Not because Tebas wants it, the deal guarantees it. We have asked the CVC deal to be more flexible and a bit more different. Other deals can also give you money because the net debt would then become positive.”

Talking about the much-derided European Super League project, he said: “We’re waiting for some movements at the end of the year.”