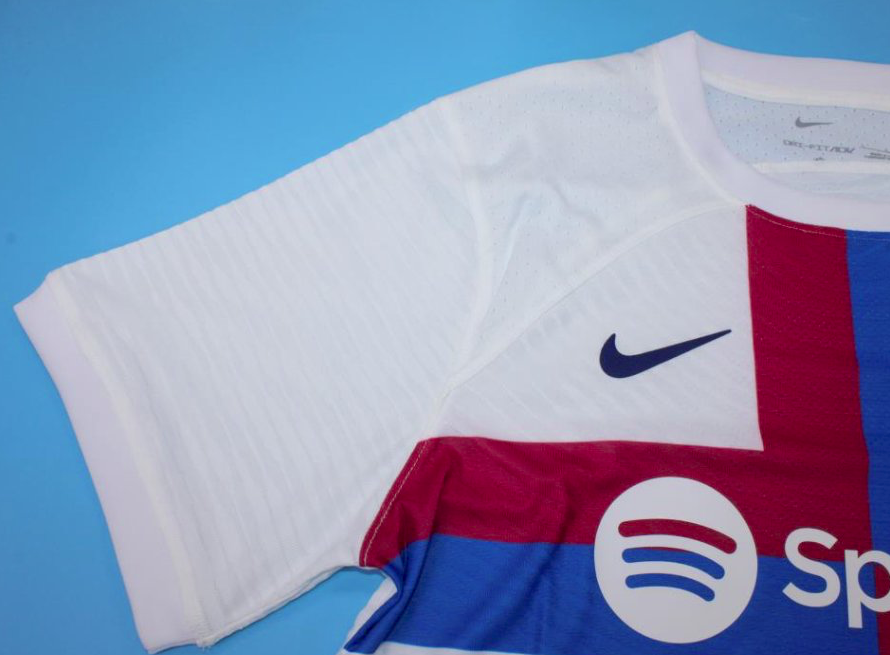 Barcelona announced Spotify as their new shirt sponsor last week for the next four years, which includes several other perks such as the stadium rebranding.

The Camp Nou will be renamed as ‘Spotify Camp Nou’, and will be used as promotional grounds to present and amplify the work of artists to the Blaugrana audience.

As it is expected to feature as the sponsor for the men’s jersey, designs for the 2022/23 season have already been leaked featuring Spotify. Edits of the home jersey made waves earlier this week, and the third kit with the new sponsor has been leaked as well.

Barça have actively avoided a white jersey to avoid clashing with Real Madrid’s colours. The club, in fact, turned down a proposal from Nike for a predominantly white kit in the 2020/21 season.

But for the first time since Nike took control, they will don a predominantly white kit.

The kit features the Saint Jordi cross in traditional garnet and blue colours in an interlocking pattern. The Spotify logo is expected to be white, as opposed to the golden one on the home kit.

The away kit is expected to be golden with black highlights. The details of the same could hit the media in the coming days.