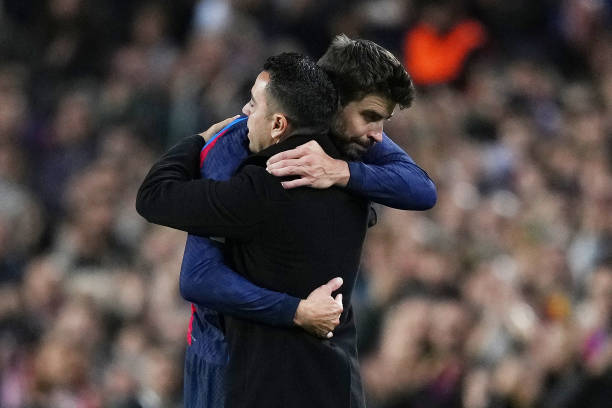 Barcelona welcomed La Liga newbies Almeria to Camp Nou in La Liga as they looked to keep the pressure on Real Madrid and push for the top spot in the Spanish league. A win tonight will have taken them momentarily above Carlo Ancelotti’s men and Xavi would be keen on putting pressure on Los Blancos.

Almeria have done admirably well for a team that has just into come into the top flight this season. They sit 15th in the table with 13 points against their name, two points clear of the relegation zones. An unlikely win against the hosts tonight would have taken them as high as 11th in the table.

Saturday night’s affair was set to be a very emotional ride for Xavi’s side, with club legend Gerard Pique announcing his retirement from the game and revealing in a video that the game against Almeria would be his last ever game at the Nou Camp. This news has hogged all the limelight ahead of the clash.

Xavi’s line-up for the game was on expected lines with not many surprises. The big news was the fact that Gerard Pique was indeed starting in his last-ever match at the Nou Camp and he would partner Marcos Alonso in central defence. Alex Balde was deployed as the right-back on the night with Jordi Alba taking his place on the left. The defence were shielded by the presence of the in-form Marc-Andre Ter Stegen in goal.

The midfield was on expected lines with Frenkie De Jong and Pedri sitting ahead of Sergio Busquets in the trident. Ferran Torres who has been in sensational form and Ousmane Dembele flanked Robert Lewandowski on either side to round off the attack.

The first half was all Barcelona who did everything other than score the goal. Lewandowski missed an early penalty but the Catalans had numerous other opportunities to score but somehow managed to not put one of them past the opposition goalie. It felt like it was one of those nights for Xavi’s men.

The second half started on the perfect note for Barcelona with Ousmane Dembele finally breaking the deadlock. Frenkie followed it up with a superb goal that made sure Xavi’s men got a cushion. Ultimately it was a fairly comfortable game for Barcelona with the game ending 2-0 in their favour.

Largely untroubled for much of the first half but stood tall to save Ramazani’s shot after a Frenkie error. Solid as ever in distribution. Had a rather comfortable game after that early save. Yet another clean sheet for the German who seems impregnable in the league this season.

It is sometimes difficult to believe that Balde is just 19-years-old. Playing in an unfamiliar right-back position, the Spaniard was simply sensational going forward and his crosses with his weak foot were surprisingly accurate. Excellent recovery pace from the teenager on a number of occasions in defence.

Captaining the side tonight in his last-ever home match, the crowd got behind Pique every single time he touched the ball tonight. Played a couple of delightful long passes to Ferran Torres and Jordi Alba on the left wing. Headed Dembele’s corner over the bar.

Pique chose to put in an almost flawless performance in defence in his last game at the Nou Camp. Signed off with arguably his best performance this season. Extremely emotional when taken off but walked off to roaring applause from the Camp Nou crowd.

Alonso was the only Barcelona player who did not do anything of significance both from a positive and a negative perspective. Still not the most convincing in central defence and should not be a long-term option there.

Constantly bombing forward at every given opportunity. Had a long-range effort on target after a training ground move from a free-kick. Excellent link-up with Ferran on the left flank. It was a vintage performance from Alba tonight, especially in the first half. Heavily involved in Barcelona’s second goal as well.

A beautiful gesture from Busi to hand over the captain’s armband to Pique. Uncharacteristically sloppy on a couple of occasions with some wayward passes. Excellent assist for Dembele’s goal. Taken off for Gavi in the 68th minute.

Made some brilliant off-the-ball runs and linked up superbly with Dembele. Placed his header straight at the keeper. Kept the game ticking with his passes but nothing spectacular from the Spanish magician. His defensive work rate was a joy to watch.

An awful blunder from Frenkie gave Almeria a golden chance but Ter Stegen saved him. Breathtaking run that presented Ferran with a glorious chance. Excellent link-up on the left side with Ferran and Alba. Had a superb shot on target minutes before the half-time whistle. Scored a superb goal from a rebound after a shot from Ansu Fati was saved.

Started off really brightly, winning a penalty early on. Harshly yellow-carded very early in the game. Looks like a far more confident player and so an excellent left-foot effort saved off the line by an opposing defender. Came very close later on but turned an Alba cross wide off the far post. Almost unbelievable that he did not score in the first half. Did not deserve to be taken off, especially ahead of Dembele. A perfect game minus the finish.

Poor from Lewa as he missed his first-ever penalty as a Barcelona player. Uncharacteristically, failed to control a couple of good passes from Ferran early on. Placed a header wide of the target late in the first half. Dropped deep and linked up superbly with Ferran and later Fati.

How do you rate that performance from the Frenchman? Played some delightful through passes to Pedri in the first half. Had a glorious chance to score but placed his diving header straight at the goalie. Awful tackle late in the first half and deservedly got a yellow card. Atoned for his miss in the first half with a superb run and finish minutes into the second half.

One of the most frustrating players to watch on the night, Dembele should have made it two after he rounded off the keeper and had an empty net to aim at. However, the Frenchman inexplicably chose not to shoot and the chance went begging. Taken off for Raphinha in the 67th minute.

Should have scored minutes after coming on but his shot was saved. However, Frenkie was there to convert the rebound. Should have scored again a few minutes later but the keeper stood like a wall. Finished off a chance but was flagged for a clear offside. It’s almost ridiculous that Ansu did not have a single goal tonight.

He is making the over-the-top chipped ball behind the defence his trademark and played a superb ball to Ansu. As always, contributed defensively.

Energetic as ever, Gavi was a live-wire. A couple of good runs and a few solid passes but nothing spectacular.

Replaced Pique late on and made his much-awaited return from injury. Came on too late to warrant a rating though.