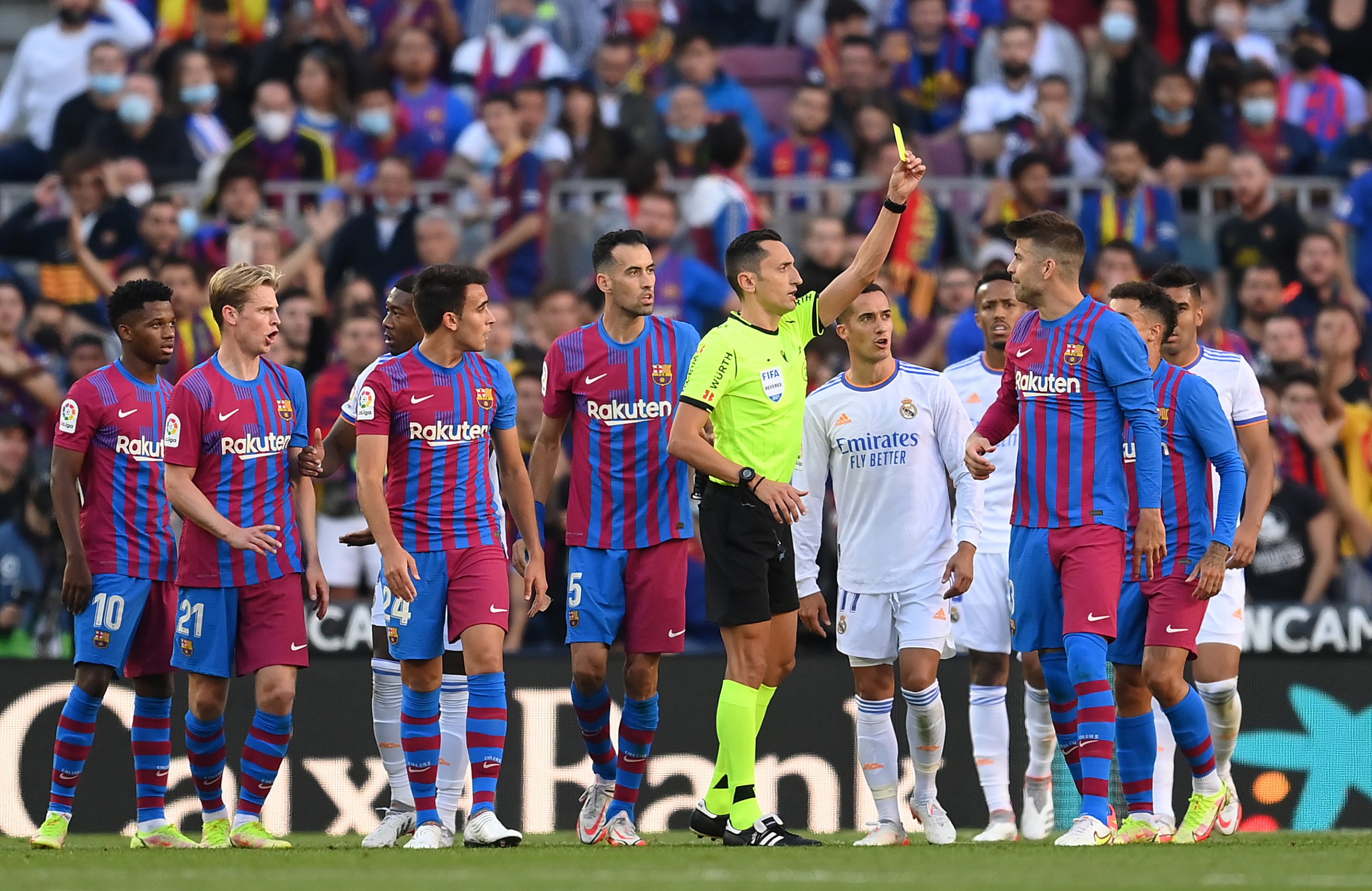 Barcelona locked horns with Real Madrid in an early kickoff on Sunday. The first Clasico was a big game for the Catalans, who lost their last two games against Real Madrid.

Meanwhile, the visitors entered the game off a dominating win over Shakhtar Donetsk in the Champions League. Ronald Koeman opted for the same eleven who started against Dynamo Kyiv, with the exception of Mingueza replacing Roberto

The Clasico kicked off in front of a brimming Camp Nou with the visitors trying to take the upper hand.

Rodrygo was the first to try and counter as early as the second minute but was kept in his limits by Gerard Pique. Almost instantly, Ansu Fati was involved at the other end in a close encounter with Militao. All in all, an electric start to the awaited clash.

The hosts slowly grew into the game in the following minutes with a good spell of possession in the opponents half. The intensity in the Catalans press was high, and so were the spirits.

Sergio Busquets won the ball in a dangerous area just minutes later. The tall midfielder had the right idea looking for Ansu Fati but slightly overhit the pass.

A foul on Memphis Depay won Barcelona their first free-kick in the 11th minute. The setpiece backfired with Madrid getting a chance to counter attack. Vinicius Jr was looking sharp but effectively shut down by Mingueza, Dest and Gavi.

Real Madrid had an incredible opening with Vinicius Jr looking for Benzema in the box. Eric Garcia perfectly timed his tackle to deny Ancelotti’s side.

Meanwhile, Ansu and Gavi combined to find Frenkie de Jong an acres of space. The Dutchman overhit his cross to lose the golden chance.

The 20th minute brought a controversial moment when Vinicius was brought down in the box. The referee signalled play on and was spot on with his decision, as the replays showed minimal contact.

The Brazilian received a wonderful ball through the lines and toyed with Marc Andre ter Stegen before the offside flag went up.

Barcelona had one of their best chances when Memphis dribbled through the opponent defence and tried to find Ansu. The teenager left it for Dest, who sent it over the crossbar of an almost open goal. A superb chance blundered.

Karim Benzema was flagged offside when he got behind the Barcelona defence in the 28th minute, but the pressure on the hosts continued to mount.

David Alaba scored a stunner for Real Madrid in the 31st minute. The former Bayern Munich player took an unstoppable shot from outside the area and comfortably beat ter Stegen.

Memphis Depay sent in a free-kick which Pique bulleted at the goal. The defender’s header was heroically saved, but it was very close to being the equaliser.

Ancelotti’s side again executed a perfect counter attack in the 38th minute and tormented Barcelona’s defence. It was shabbily defended, but the threat was kept at bay. A minute later, Rodrygo’s shot was heroically saved by Ter Stegen.

A lovely sequence from Barcelona saw a precious chance created close to half time. Ansu Fati got the ball inside a crowded box and took a shot, but it was well defended.

Real Madrid went into half-time with a one-goal lead over their arch-rivals. Meanwhile, Koeman’s side walked in clearly outplayed, but not without bright spots.

Phillipe Coutinho came on for Oscar Mingueza at half time.

Barcelona walked out of the dressing room more confident and convinced of their chances. The Blaugrana almost immediately responded via a low shot from Coutinho but were denied. Three minutes later, Alba and Fati combined in synchrony to create a chance that was saved by Courtois.

Real Madrid had a big chance when Rodrygo found Vinicius in the box. However, Dest came up with a clutch interception to deny the Brazilian. Karim Benzema threatened just a minute later with a dangerous strike that required a good save from ter Stegen.

Vinicius tried to combine with Benzema in the 68th minute but was stopped by Ter Stegen. Meanwhile, Alba’s cross at the other end was stopped by Courtois just seconds later.

Barcelona fans had their heart in their mouth in the 72nd minute. Karim Benzema attempted an outstanding finish, but somehow the ball trickled wide.

Kun Aguero came on for Barcelona in the 72nd minute and made his Clasico debut. Ansu Fati made his way out after a good day at the office. Sergi Roberto came on for Frenkie de Jong five minutes later and took on duties in midfield.

Gerard Pique and Federico Valverde had a horrific collision at the 80th minute, bringing a halt to the play.

Luuk de Jong was Koeman’s solution in the dying minutes of the game as he came on for Gavi. Aguero’s header off Memphis’s ball went just above the bar in a great chance.

Vinicius Jr went off injured in the closing minutes, while Courtois had problems with his knee too.
Seven minutes of added time were added on, and hope was injected into Barcelona.

Gerard Pique turned striker and joined Luuk and Aguero in the attack. Barcelona tried to fire in crosses that didn’t find work.

While Pique and Barcelona claimed a penalty at the other end, Real Madrid did not hold back their counter and scored a perfect team goal. Lucas Vazquez had a simple finish after receiving the ball in the box.

Kun Aguero pulled one back in the last minute of the game when Sergino Dest sent in a perfect cross. Yet, it was a little too late for Barcelona.

The game ended 2-0 in favour of Real Madrid. Ronald Koeman also became the first manager in over 80 years to lose three Clasico’s in a year.