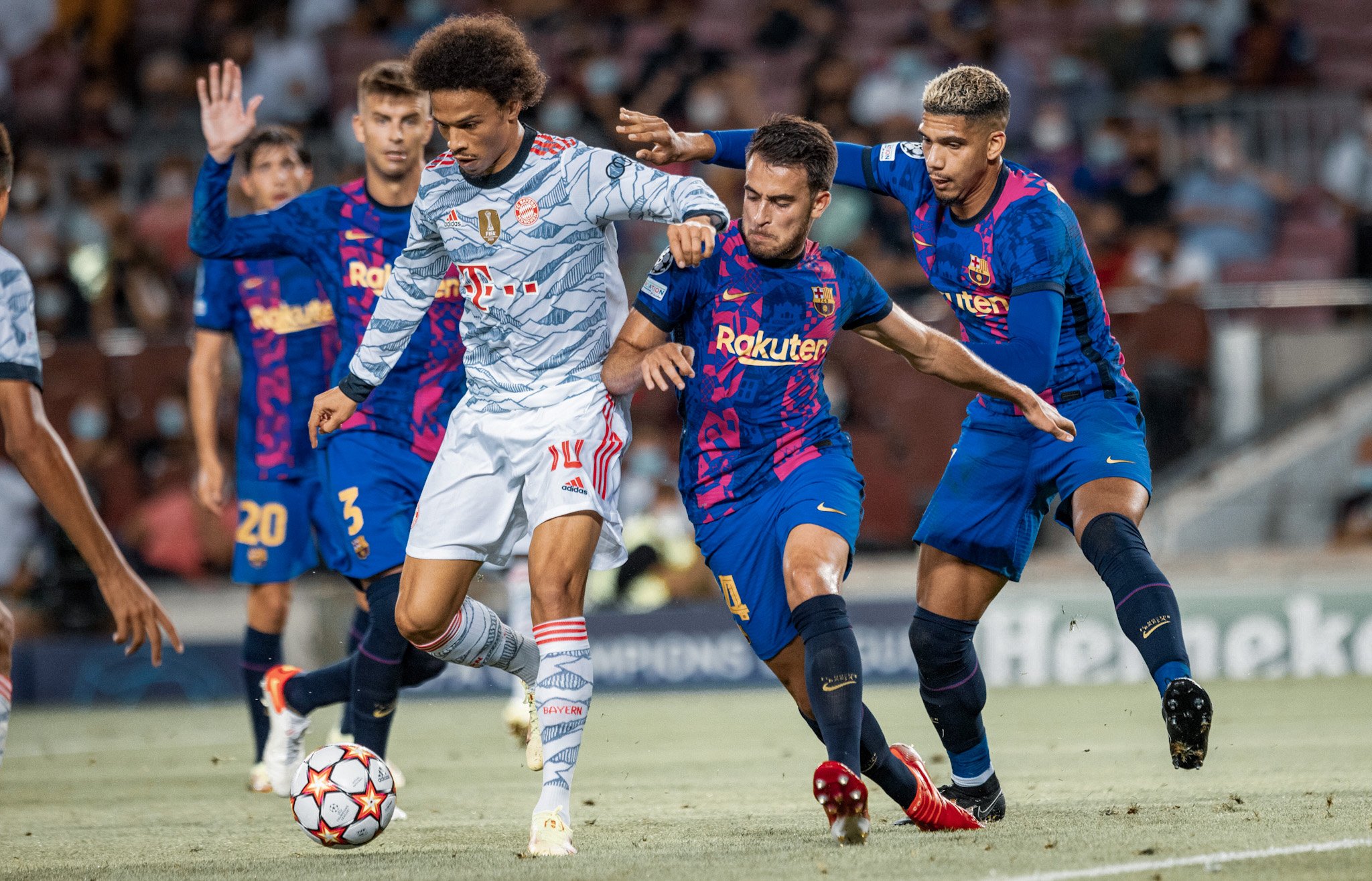 On a highly-anticipated Tuesday evening, Barcelona took on Bayern Munich in their own backyard for the first time after their humbling defeat in Rome. The opening Champions League clash promised to be a cracker, and needless to say, lived up to its hype.

Much speculation surrounded Ronald Koeman’s starting lineup on the night, especially because of the injuries in the side. The Dutchmen went for a 5-3-2 as predicted by multiple outlets with Gerard Pique, Ronald Araujo, and Eric Garcia in the defensive wall.

Sergino Dest was not fit to start, which meant that Sergi Roberto took on wingback duties with Jordi Alba. Luuk de Jong received his debut and started alongside Memphis Depay.

The game started off on a balanced note. Neither side dominated the opening period of the game, with both teams having their moments.

In just under five minutes, Bayern Munich midfielder Joshua Kimmich was booked for a harsh challenge in the middle of the park. Five minutes later, Ronald Araujo got lucky after his push on Robert Lewandowski in the box went under the clouds.

The first big moment in the game came in the 19th minute when Leroy Sane half-volleyed a shot from inside the box. The thunderous shot seemed set to put the visitors up, however, Marc Andre ter Stegen’s quick reflexes helped Barcelona hold their fort.

Bayern Munich’s teenage sensation Jamal Musiala was clear on goal in the 27th minute. It seemed like he only has ter Stegen to beat to put the Bavarians in the lead. A last-minute scramble from Pique and a well-timed tackle from Eric Garcia kept Barcelona in the game.

Amidst the German’s periods of dominance, Barcelona did have their chances against the thin German defense. Memphis Depay’s astute touches found Luuk de Jong on multiple occasions, but the striker did not have the pace or skill to finish off his chances.

Thomas Muller scored for Bayern Munich in the 33rd minute. A well-worked shot from the edge of the area took a deflection off a poor defensive effort from Eric Garcia, and rattled into the back of the net.

The hosts tried to find their feet back after the opener. A well-worked buildup ended close to a goal for Koeman’s side, but the final ball was just too high for Frenkie de Jong. Barcelona slowly began to grow into the game, but lacked the incisive edge.

The first half ended with a one-goal advantage to the visitors. Bayern were the better side in the half by far, but the goal was still one out of luck.

The start of the second half was similar to the first period. Sergio Busquets fancied a shot from distance in the 50th minute, but a smart interception from Upamecano rendered it futile.

Leroy Sane took a fabulous shot in the 52nd minute which was saved by Barcelona’s goalkeeper. Four minutes later, however, Lewandowski pounced on a rebound off Musiala’s shot to make the score 2-0 to the Bavarians.

Ronald Koeman responded to the goal with immediate changes in the team. Gavi and Yusuf Demir came on for Sergio Busquets and Sergi Roberto respectively at the hour mark.

The introduction of the youngsters brought more versatility and energy into Barcelona’s play. The team soon reverted to a 4-3-3 when Oscar Mingueza replaced Eric Garcia and Philippe Coutinho came on for Luuk de Jong.

Gavi continued to impress with his well-timed forward runs and tenacious press. He was a constant menace to the Bayern defence, and had a good chance in the 70th minute.

Jordi Alba signaled to the bench that he wanted to come off. Given his recent recovery from injury, the request was immediately responded to and Alejandro Balde got his Champions League debut in the 73rd minute.

Gavi, Balde, and Demir played fearlessly and were a thorn in the German’s foot. They were relentless and created wonderful openings that the starting team struggled to do.

The Catalans came close to conceding a third goal a few minutes from full time when Michael Sabitzer smashed the ball into the side netting. Lewandowski, however, did make the advantage three goals when he calmly converted yet another rebound.

Two minutes were added on at the end of the 90, but the Catalans could not pull a goal back. The game ended 3-0 in favour of the Germans and puts them in firm contention for the top spot in the group.