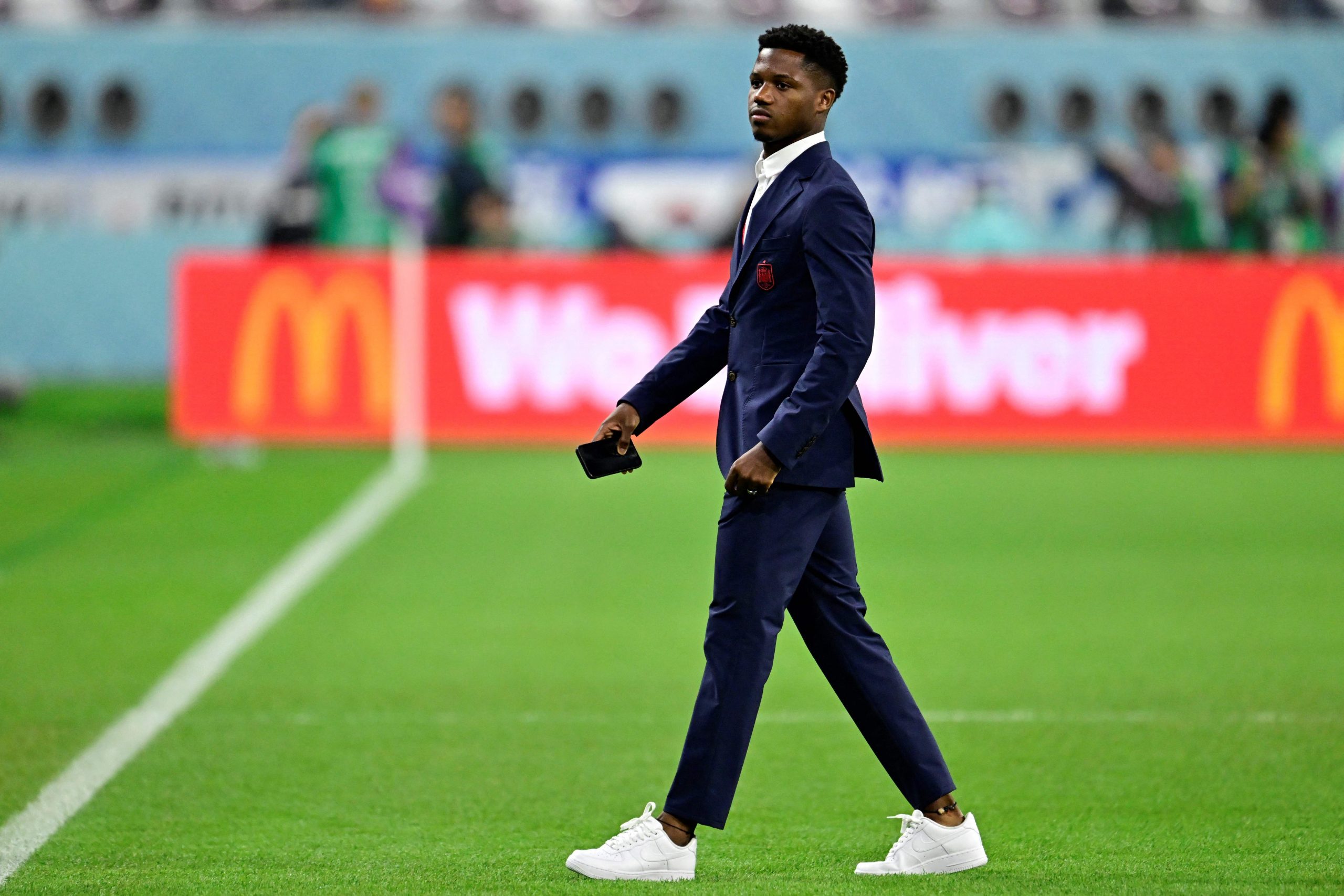 Ansu Fati has had a difficult past couple of years, having had to go through multiple injury ordeals that needed surgery and an extended period out on the sidelines.

Having returned to full fitness this season, the 20-year-old has had to suffice with a reduced role in the Barcelona setup under Xavi Hernandez as the manager has been reluctant to rush him back and risk more injury issues.

It led to question marks over his selection in the Spain national team for the FIFA World Cup 2022, but manager Luis Enrique decided to back the young forward and took him along to Qatar.

Fati, who has not played much for La Roja at the tournament, recently sat down for an interview with Mundo Deportivo and spoke about various things related to Barcelona and the national team.

The 20-year-old’s appearance against Japan was his first for Spain in a competitive setting in two years. Talking about how he felt at that moment, he said: “It felt very good. It’s an honour every time I play for the national team to try to give my best and enjoy this opportunity.”

Speaking about having to be patient to make a return to the national team setup, he added: “In the end, there are many top players and we all have to be ready because the coach will need all of us and we must be ready.”

The Barcelona forward then spoke about Luis Enrique and the confidence the manager had shown in him by putting him on in a critical moment when Spain were in a losing position against Japan, saying:

“For me, everything that means getting more minutes, all the better. What I like is to be on the field.”

At one point, Spain could have been eliminated from the World Cup, if Costa Rica had gone on to defeat Germany. When asked if he was aware of that situation, Fati said:

“As far as I was concerned, no, I didn’t realize it. We knew we had to win and that’s what we set out to do, although in the end, it wasn’t to be.”

On how the team is reacting to the defeat vs Japan, he revealed: “I see the teammates well, the group is fine. We lost the last game and it leaves you with a bad feeling, but we are happy to have made it through. We are in the round of 16 and now what remains is: either you go on or you leave.”

Talking about the knockout phases, he added: “Now it’s do-or-die and the players are focused on that. We’re going to give our best to get through to the next round.”

Discussing the moment when he learned about the call-up for the World Cup, Fati said: “I was training at the Ciutat Esportiva, watching it on TV. When I heard my name last I was very happy. I was with some teammates who saw my happiness and with the physios, with whom I was able to celebrate.”

On whether it was a just reward after everything he had gone through over the past couple of seasons, he said: “That is, for everything I have been through in the last two years. The truth is that it is the reward for the day-to-day work, for trying to improve myself. And now that I am well, it has been a great reward, yes.”

Enrique admitted that Fati’s inclusion had been a doubt until the last moment. When asked how he felt about that, the youngster replied: “It’s the coach who thinks about it. The only thing I know for sure is that I am ready and prepared for when he needs me.”

On his interactions with Enrique after arriving at the national team camp, Fati said: “Yes, the coach expressed his confidence in me, why he bet on me to come here. And I am grateful for this opportunity.”

Opening up on the Spain head coach’s style of management and way of handling things, the young forward added: “The way he transmits things to me, he is a very direct guy, who tells you what he thinks and is very demanding with himself and with all the players. That’s something I like. I would define him as a direct guy who wants to win.”

On whether there is any major difference in terms of philosophy between Enrique and Barcelona manager Xavi, Fati said:

“I think each coach has his own way of seeing things. Each one has his own way of being, explaining, and playing. In the end, Luis Enrique and Xavi are different, but because one is coaching a club and the other a national team. I see it differently.”

Spain have one of the youngest teams at the World Cup, chock-full of talented young individuals like Fati himself. When asked whether that might hold them back at the crucial juncture of the competition, he said:

Apart from having a young squad, Spain also have a large contingent from Barcelona – as many as eight Blaugrana stars are part of the La Roja setup. Giving his thoughts about it, Fati added:

“Yes, having teammates from the team also helps. And with the others, in the end, we compete in La Liga and we see a lot of each other. The camaraderie we have here is incredible because everyone wants to help and add up.”

Fati then hailed his club and national teammate Gavi, who has exploded at the World Cup despite being just 18 years of age.

“You can see the level he is showing at the age he is… but I am not surprised by the level of competitiveness he has, by how he trains. It’s incredible and to see him there, playing like that, makes me happy,” he stated.

When asked to comment about Barcelona’s season so far, which has seen them get eliminated from the Champions League but top the La Liga table, Fati said he is currently only focused on the national team.

“Now I’m focused on the national team and when I return we’ll see. Whatever happens with the club, we’ll see,” he insisted.

On being asked about his lack of game-time at the club during the first phase of the season, Fati admitted that he had hoped to be involved more regularly, saying:

“Yes, I’m not going to lie to you. I want to play but I understand that the coach is the one who decides and I have to give my best every day to be able to turn it around.”

When asked if he has any doubts about his future at the club because of the game-time situation, he added: “No, now I’m focused on the national team. I’m sure that by working on the present, the future will be better.”

On whether he believes he will be an important player for Barça moving forward, Fati replied: “Yes, I hope so.”