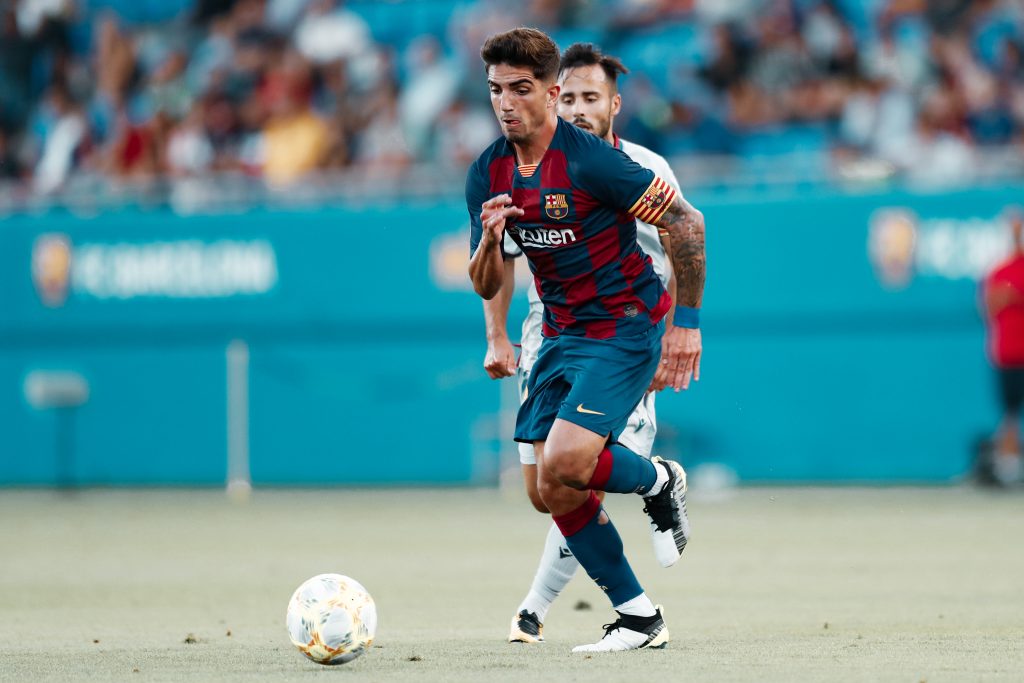 Hungry, intelligent and gifted, Barça B’s all-round midfielder Monchu Rodríguez is ready for the First Division, and for the blaugranas’ first team too.

It’s a bit strange, not to say unfair, that the player with most minutes at Barça B and certainly one of the most important ones is by no means one of those receiving most attention for a promotion to the first team. Ramón Rodríguez, commonly known as Monchu, has been growing in importance and maturity in these past two seasons. But, while he has been absolutely key for García Pimienta, he is being treated almost as if he was a secondary actor. Why so?

Monchu is the captain and leader of Barça B. The versatile midfielder is, by some distance, the player with most minutes with the reserves this season, in 2.307, as well as their top goalscorer with 8 goals. While he takes free-kicks and penalties, his high scoring figures already hint at one of his main strengths: his instinct and arrivals into the box. He knows when to make a surprising run into the penalty area to get at the end of a cross, and is extraordinary at shooting from short and long range as well.

His character and maturity defines him on the pitch. Despite being only 20 years old, he’s one of those footballers who you know for certain that will not shrink once they play alongside the senior stars. Whether it’s in a training session, in a Second Division B match, or a potential fixture at the Camp Nou, Monchu never lowers his intensity and concentration. If he has to share the pitch with the likes of Messi and Busquets, you can bet on him to play with his head held high and without fear. Such boldness, nerve and personality characterised someone like Thiago Alcântara when he was his age too.

Monchu has only appeared with the first team in friendlies, and clearly deserves better | Photo by Frederic J. Brown / AFP via Getty Images

As much as he is passionate and committed, though, his technical and tactical quality can by no means be neglected. His attitude many times hides his incredible talent to pass, move, shoot, carry the ball and protect it. He is an outstanding distributor, in tight spaces, short distances and at one touch, but also with his pinpoint long balls into a teammate. In spite of often being linked with someone like Vidal for his spirit and freedom to push forward, in some ways he’s closer to Xavi. Differences apart, obviously, Monchu is similar to Xavi in terms of being very positional, but by no means static. He moves, yet knows how to move. He never disturbs other zones, but will drop deep or go forward depending on each situation. A low centre of gravity, small stature at only 1.73 metres, and a lot of mobility and dynamism. An organised, yet not static, interior.

One of Barça B’s turning points this season was when Pimienta placed Jandro Orellana in the holding midfield role, and moved Monchu to central midfield. With Jandro as the pivot, Monchu and Riqui as the interiors, and Collado as a false winger, the blaugranas have been highly functional in their dominance of possession, positioning and pressing. For his smartness and passing range, Monchu can comfortably act as the defensive midfielder, but as a number 6 or even number 8 he can have a much greater impact in the attacking end.

For his extremely high rhythm and maturity, the Mallorca-born talent really looks like a first team player that has dropped to the B to provide them some help. His competitiveness and leadership is really hard to find in someone of his age, as he’s hungrier than everybody else. While he may not be the prototype La Masía midfielder, like Riqui or Jandro, he does have all the concepts required for Barcelona plus other attributes that make him unique. With a complete skillset and his dynamism, his profile can be very complementary in the senior side.

If the question is Is he ready for the first team?, the answer should be clear: no doubt. Nevertheless, responding to Does he have a place in the first team? is much harder, since it not only depends on him. His contract with Barça expires in 2021, but, like with Álex Collado, the club has the option to automatically extend it to 2023. They clearly should. According to Mundo Deportivo, teams from Spain, Italy, Germany and England, with Brighton and Bournemouth, have shown interest in the 20-year-old. No wonder why. Monchu is completely prepared for the First Division, and should be playing in it next campaign. However, while the midfield is overcrowded, Barcelona should seriously consider keeping him in the first team. Thankfully, Monchu has been training under Setién these days, and at least deserves his official debut with the Catalans. A loan would not be a bad alternative, but the azulgranas should not overlook the midfield general of Barça B.