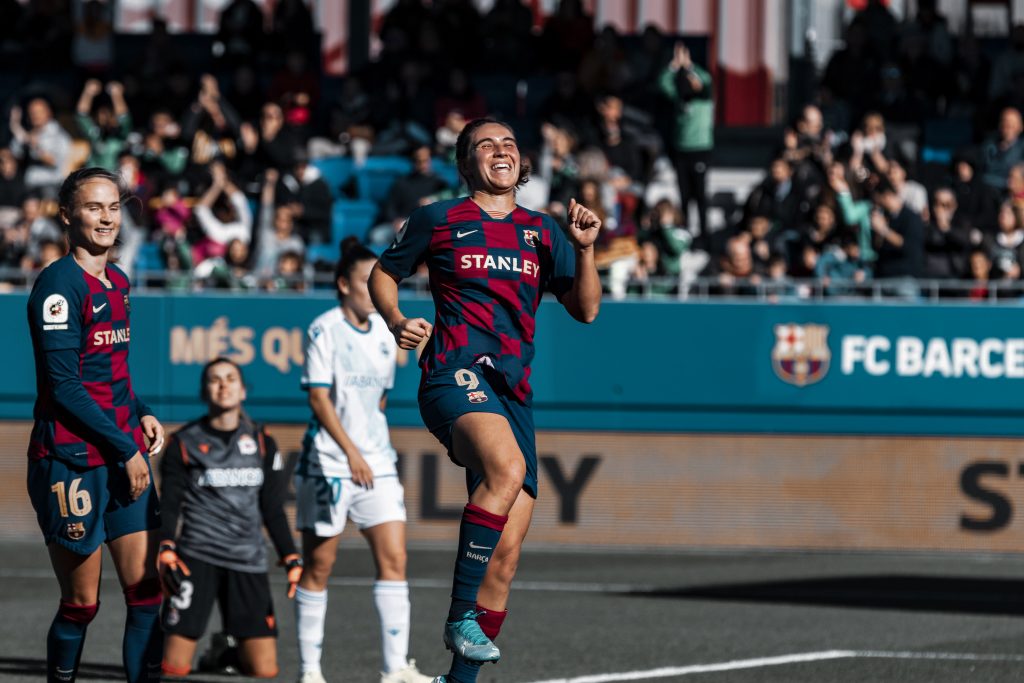 24-year-old Mariona Caldentey has established herself as an indispensable piece of Lluís Cortés’ Barça Femení thanks to her quality, tactical versatility, hard work and crucial goals.

Mairona Caldentey: most Barça Femení fans will have this name echoed in their ears. The player that took Barcelona to its first-ever UEFA Women’s Champions League final with her goal against Bayern Munich. Authentic, voracious and lethal in the rival area, Mariona Caldentey rises again in the most delicate stage of the season. She firmly forms the bases of Lluís Cortés’ side, ready to take the league title back and reach the top of the European dream: the club’s first-ever UWCL title.

Early career and signing for Barcelona

Caldentey developed through the ranks of the UD Collerense youth system, the same as fellow Balearic Islands native Patri Guijarro. Barcelona signed her on July 30, 2014. In her first season with the team, 2014/15, Mariona Caldentey from Mallorca was one of the stand out players of the season. A serious knee injury in spring 2015 kept her out of action for six months before she bounced back to regain her old form. She has been a mainstay since joining Barcelona.

Imperial in any attacking position, Mariona Caldentey adjusts the rival goal in her sights, able to exalt her best virtues in the most delicate moments. Her goal against Atlético de Madrid in the Copa de la Reina will always bring back joy during this break. Hosting a highly relevant final against Atleti in 2018, the Barça number 9 scored the winner at the 122nd minute of extra time and handed the cup title to Barcelona as a worthy champion.

With every passing season, Mariona has become more and more important for the azulgranas, scoring many crucial goals along the way

And owing to her importance to the team, FC Barcelona has reinforced its commitment to one of the best players of the current crop. Barcelona announced the renewal of Mariona Caldentey’s contract until 2022, reaffirming that she is going to be a key figure in the team for many years to come.

In November 2018, Mariona lost her father, Miguel Ángel, the person who instilled in her a passion for football. Her father used to take 50 minutes a day out and 50 minutes back to drive her to train in Collerense during her childhood. He was one who brought her back home when it was almost twelve at night. He was the mainstay in her life who taught her passion for football. Mariona was finding it difficult not to be able to exchange opinions with him, listen to his comments after every match since his loss. She found some solace from her teammate and friend Alexia Putellas, who was in a similar kind of situation in her life. Mariona found football as the escape route to get out of the sadness she was going through.

❛ When everything about my father happened, I was at home, but a week or so it was like saying: ‘I need to continue with my routine, I need to escape’. For me, football also meant demanding that I sleep well, demanding that I eat well, to have a more stable life, a little calmer ❜

“If you see a person who is next to you every day, to whom something similar to yours has happened, you simply do not need to be talking every day. With a gesture many times you can make that person not end up thinking always in the same. Both me and my teammates, when something like this happens, which is a disgrace, that for anyone is a very strong stick, we have to be there. On top Mariona is a player who can always give you something different and she will the most important player for us”

A creative midfielder who usually occupies the flank but can also slot into any position in attack, Caldentey has an eye for goal, excellent vision and the ability to get past players, not to mention an appetite for hard work. Her tracking back is crucial to this Barcelona side, in which she has taken on a more prominent role since making her debut in 2014.

Mariona is a goalscoring midfielder. She has been particularly quick. Even her assists record seems relatively modest. But our memories of particular games are shaped by the warmth of experience and what we saw on the field. At times, Mariona is a joy to watch; how she understands the game, the ease with which she glides away from opponents, particularly in the tightest of situations, always there to exchange a pass with a team-mate to link defence, midfield, and attack and keep the game moving at the pace she dictates. This is a skill no pass completion or assist chart can ever show us.

Mariona has the strength to control the ball amid high pressing and to keep the ball from goal to goal, as well as being forceful when pressing the ball’s exit from the opponent. She is a very agile and high-quality player that allows Barcelona to have the ball at every point of attack. Mariona has dribbling qualities and a great pace, allowing her to contribute to counterattacks, helping with fast transitions in Barcelona’s game. She is synonymous with the goal- last year she had a great season and although she is playing a little less this season due to heavy competition in the midfield and forward lines, she has a high quality. She takes advantage of finding spaces in the final third.

Mariona is having a great season with Barcelona, and there a couple of moments that come to mind when we look back. Let’s relive them.

Against Athletic Club in San Mamés

After an hour of play, and with 0–0 on the scoreboard, Mariona Caldentey invented a goal out of nowhere to get the lead. She started in the middle, chased by two defenders literally on her heels for 20 meters, and sent a well-controlled shot to the left finding the back of the net. A work of art that many of the more than 30.000 spectators present in the stands did not hesitate to applaud.

A moment to remember from Supercopa Femenina 2019/20 semi-final

Mariona Caldentey dictated the play and made Atlético dance to her tunes in the third goal, which was all about how she wanted the play to end. You can see in the pictures below Mariona received the ball on the left side of the pitch.

She passed the ball back to Mapi and ran across the pitch to receive the ball on the right side after getting all of Atletico Madrid players’ attention to the right.

In her next move, she switched the play to Lieke who had acres of space to run behind the defense and send a pinpoint cross to Oshoala who had nothing to do but get her head in the direction of the ball and find the back of the net.

It merely took a little less than 20 seconds to create a goal out of nothing. Mariona proved once again how decisive she can be if she’s given license to play to her strength. Yes, Oshoala scored and Lieke assisted, but that third goal was all about Mariona. She was the architect and mastermind behind the match-winner. Mariona created 4 clear cut chances throughout the match, having put Oshoala in one-on-one situations against Atletico keeper Lola Gallardo on 3 different occasions.

Mariona after the Champions League semi-final

Mariona highlighted the second-leg semifinal at the Miniestadi against Bayern with her penalty that made Barcelona go 2–0 up on aggregate, solidifying their place in their first ever UWCL final: “An incredible experience. More than 13,000 people came and it was a super nice day that we will all remember”.

Mariona on playing at the Camp Nou

“I am a culé from a very young age and I watch the Camp Nou from home, it would be a dream to play there, but first we want people to come to the Mini Estadi and, when we manage to fill it, put pressure to play at the Camp Nou, we must remember where we came, that not long ago we were playing on artificial grass with 10 parents in the stands”

Walking into her sixth season at Barça Femení, the versatile midfielder or attacker will try to continue adding titles to her record with the blaugranas, in addition to a League title and two Copas de la Reina. The league title and winning the first European title appear in Mariona’s wishlist this season and she is looking to write one of the best pages in the history of FCB Femení.