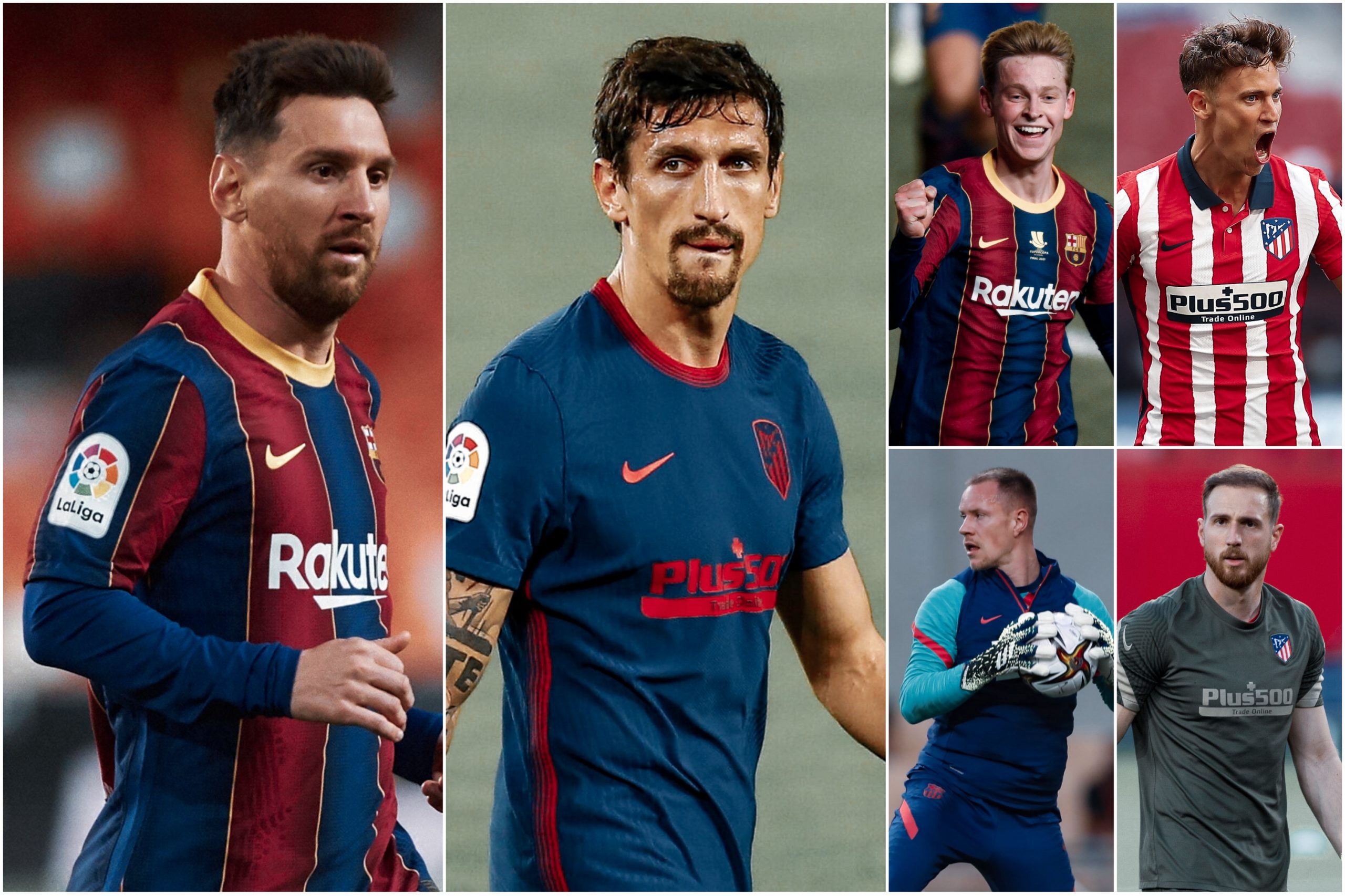 Possibly the greatest clash of styles in La Liga Santander is that of Futbol Club Barcelona vs Atletico de Madrid. The Catalan kings and the Madrid giants square off at the Nou Camp in a mammoth encounter this Saturday.

The grandeur of the match exists not only by virtue of the teams’ levels but also the significance of the tie in the grand scheme of things. The pair have been neck and neck for the better part of the last four months, and in this pivotal encounter, whoever emerges victorious could have one hand on the title.

Beset by injuries, their ludicrous over-performance, and unsustainable tactics, Atleti have seen their joint-best start to a league season reduced to ashes. Despite having won 48 points in the first half of the campaign, Los Colchoneros let the title slip from their grasp in an almighty fall from grace.

At the same time, the Blaugrana are meritorious of their plaudits. Since matchday 20, the Garnet and Blue have been La Liga’s best side, amassing 37 points from a possible 45. Should they win each of their remaining fixtures, then the Catalans will surpass Atleti’s already impeccable start to the season.

The previous tie between the two was fairly even, despite all three points remaining in Madrid. The defining factor, a miscommunication between Marc-André Ter Stegen and Gerard Pique, ended in the latter conceding a rather reckless goal. The team Diego Simeone faced then pales in comparison with that which Ronald Koeman has moulded since.

Saturday’s clash will have profound implications on the title race. Whoever emerges victorious in this tie merely has to win their three remaining fixtures to be crowned champions, as Sunday’s fixture between Sevilla and Real Madrid is a guarantee that at least one member of the chasing pack will drop points.

In this article, Barça Universal explores three key battles that will decide this most vital of ties in the Nou Camp.

Ever since that night at Anfield in the 2019/20 season, Marcos Llorente has been a different man. By the strangest of butterfly effects seen in football, the young Spaniard briskly evolved from a berate footballer destined to rot on the bench to one of the best midfielders in all of La Liga. His drastic shift in fortunes has seen him transformed into a key cog in Diego Simeone’s machine and one firmly set on destabilising Barcelona.

His average positioning this season suggests that he largely prefers playing on the left side of midfield. Despite his spot in the centre of the park, the Atletico Madrid man has scored a whopping 12 goals and provided a further 10 assists. His sheer over-performance shows just how effective he is at applying his trade. He has surpassed his expected goals tally by seven and that of his expected assists by a further 5, a testament to just how lethal a side Cholo has conjured up.

Much like his counterpart, Frenkie de Jong has evolved in every facet of his play as well. A jack of all trades, the Dutch midfielder is gradually transforming into a master of all. He has seen himself deployed in the midfield, in attack as a false 9, at the heart defence as a centre-back and a lone pivot too. He executes each task bestowed upon him with elegance, style and imagination in ways only he can.

Given Los Colchoneros’ shifting style of play, de Jong will primarily be tasked with keeping the Spaniard at bay. His numbers, which amount to just over a third of all goals the leaders have scored, are testament to how integral he is to the functioning of the unit as a whole. Shutting him down is much easier said than done, as he has the athleticism and dynamism in his play to go the extra mile, both literally and figuratively.

In addition to halting Llorente, de Jong has the added task of complementing the attack. His ‘pseudo nine role’ has seen him both as the instigator and finisher of crosses into the box. His versatility will be of utmost importance against Atleti. The sheer number of bodies the visitors are inevitably going to leave behind will require someone with positional intelligence and enough tactical nous to create numerical superiorities in the mid and final third. Moreover, he might have to share extra burden in attack from Pedri, who seems to be exhausted beyond his body by now.

Should both tasks be accomplished, the midfield will be in Barça’s control.

A composed figure at the heart of Atletico Madrid’s defence, Stefan Savić has been without a shadow of a doubt one of Diego Simeone’s most influential players this season. Joined with Mario Hermoso in the backline, the Montenegrin has been formidable in maintaining La Liga’s best defence.

In the reverse fixture against Barcelona, he produced an excellent display of his composure on the ball, ending the match with a 94% passing accuracy. He made a handful of clearances, was successful in the few aerial duels he had to face and for most of the encounter, he barely put a foot wrong.

Given Lionel Messi’s offensive presence, there is little doubt that not only Savić but also the rest of his backline will have to be on their toes throughout the 90. The Argentine has a knack for running at opposition defenders, averaging just under five dribbles per game this season. Bar that, it matters not whether he is within or without the penalty area, as the Ballon D’or record holder is more than capable of turning even the bleakest of chances into the best of opportunities.

The Barça captain failed to score in the previous fixture, and in what is possibly his final season at the club, he will be looking to haunt his second favourite opposition one last time in his home stadium. In this fixture last year, Messi scored a panenka penalty and provided an assist, but to his dismay, the Catalans failed to keep all three points. In such a tightly contested title race, he will be looking to give his side the best shot possible at winning their 27th league title.

Messi’s preference for the central areas leaves him one on one with one of La Liga’s best centre-backs. Should he succeed in making a mockery of the Atlético number 15, then the Blaugrana could end the night not only as winners but leaders of La Liga.

The battle of the goalkeepers is one of the most intriguing in all of Spain. With ter Stegen, Barcelona have quality both in the offensive and defensive spheres of the game. In a testament to Johan Cruyff’s view of the ball, he is just as much the last defender as he is the first striker.

As for Jan Oblak, it is trying to imagine where Atletico Madrid would be without him. Such is his imposing figure in goal, and his sheer dexterity in the craft, that he has kept a staggering 17 clean sheets this season in La Liga. In his 34 matches in La Liga this season, he has conceded 22 goals, but this too at a Post Shot Expected Goals value of 26.8. Atleti, as a team, concede significantly fewer goals than their chances would suggest, evidenced by the fact that he has saved his side more or less 5 goals.

The German, meanwhile, has come under scrutiny for conceding an obscene amount of goals, many of which they consider easily stoppable. They would be right in saying this as in spite of his 26.3 PSxG, the Barça number 1 has conceded 27 goals, nine of which have come in the last five games, and arguably four of which were out of his own wrongdoing.

The game against La Liga’s second most offensive-minded team will provide ter Stegen with the perfect opportunity to set the records straight. Oblak saved his team’s blushes in stoppage time against Elche, saving a penalty to keep the three points at bay. The Champions League winner meanwhile conceded two goals in the weekend, one of which was easily avoidable had he been more committed to the ball or marshalled his defence to anticipate Valencia’s actions to a higher degree.

Whoever prevails in this duel is most probably also going to be the winner of the prestigious La Liga title come season’s end.