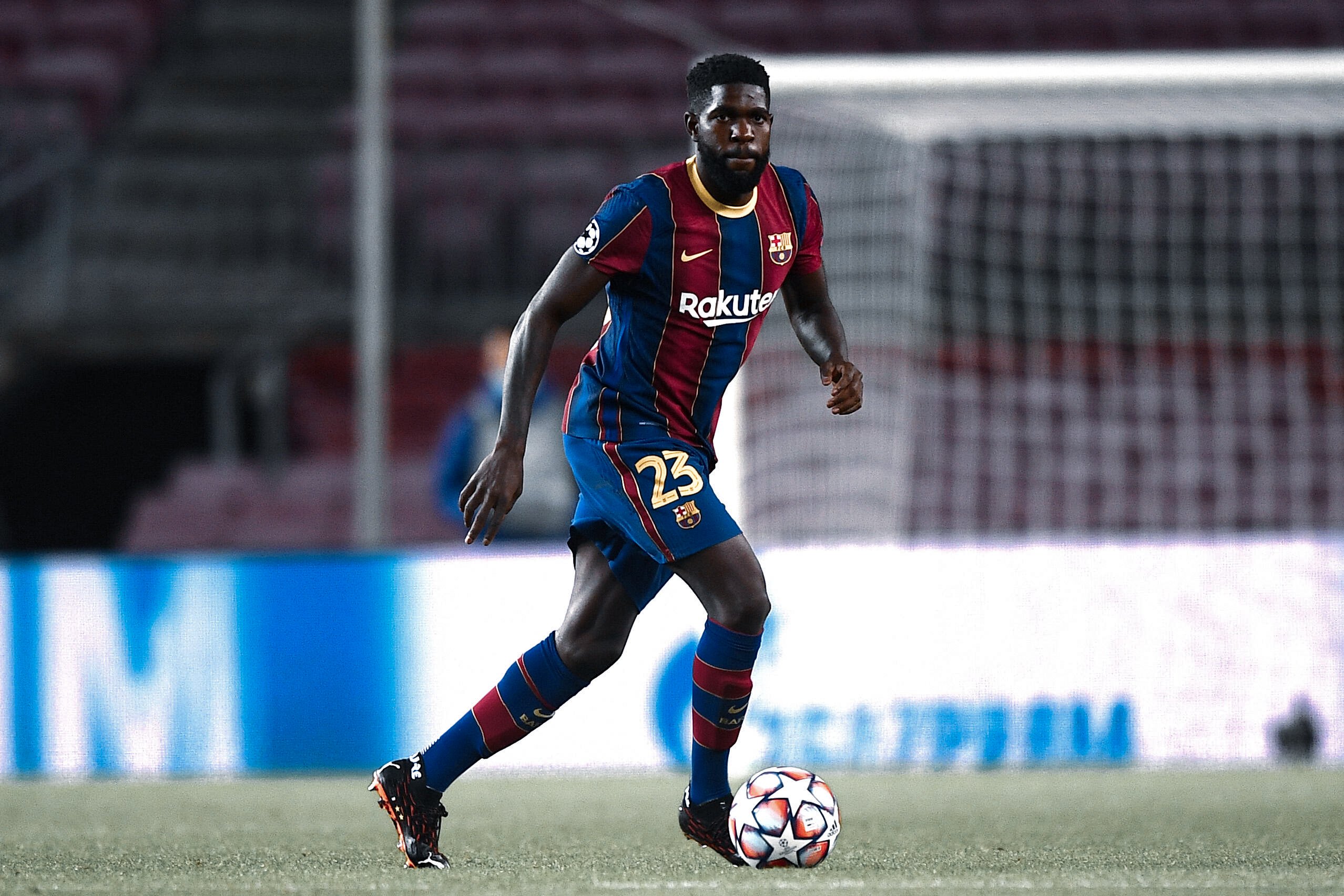 Samuel Umtiti has endured one of his most difficult seasons to date. Once widely considered among the world’s best, the Frenchman’s almighty fall from grace has been just as much a source of mockery as it has despair for culés. The constant degradation of his relationship with the club has seen more and more supporters demand his imminent departure.

In this article, Barça Universal explores Samuel Umtiti’s season, culminating in a season-long rating for the World Cup winner.

A moment of bliss

Given his performances in the 2019/20 season, few, if any, expected Samuel Umtiti ever to have a place in the starting eleven. The inconsistency in his play coupled with his unbearably long injury spells saw him fall ever so steeply down the pecking order. Last season, with Oscar Mingueza’s astronomical rise to prominence and Ronald Araújo’s stability in central defence, much of the same was expected to happen. And indeed it did.

Within the first nineteen matchdays of the season, he featured only twice for the Garnet and Blue. Once he stepped foot onto the pitch, he reminded Barcelona what they lost. Against La Liga’s worst defence and inconsistent attack, Ronald Koeman has the world champion a spot in the starting eleven for what seemed like aeons. His composure on the ball, resistance to pressure and overall equanimity in his play was a picturesque performance from a player once among the world’s finest.

He managed to follow this brilliant outing with another solid match against Elche away from home. Without Lionel Messi in the side, hoards of supporters expected a tough outing for the collective, and especially the Barca number 23. Despite how much the odds had been stacked against him, he excelled once more.

For a moment, it felt as though his knee injury was an issue of the past, but all that changed once the Catalans faced Granada once more in the Nuevo Los Carmenes.

A steep fall from grace

On the pitch problems

If the league match against Granada offered Samuel Umtiti a chance for redemption, then his game against the same rivals brought an end to his heroic return. All that had earned him plaudits in the matches preceding the Copa Del Rey quarterfinal dissipated instantly.

His damaged knee blighted his ability to run and recover his position. During counterattacks, with him as the unfortunate weak link, Diego Martínez’ side ruthlessly attacked him, making the most of his side of the pitch. His previous performances made this calamitous performance seem like a one-off game, but that couldn’t be farther from the truth.

The Frenchman’s level gradually deteriorated, and so much so that he fell even behind Frenkie de Jong in the pecking order. His chances thereafter were few and far between, and in possibly what was his last game for the Catalan club, he delivered yet another such performance.

The three games against Granada were symbolic. In the first, he gave the impression that he was back to his very best. In the second, he showed slight cracks in his gameplay that could easily be exposed. In the third and final game, his inability to perform the most basic tasks in his role as a central defender cost him any possible future in the Garnet and Blue and the club any chance of winning La Liga.

Given his ever-decreasing utility to the side, the crushing wage bill and the need to rejuvenate the squad, one would expect Samuel Umtiti to better comply with the team in their pursuit to better the club. Instead of providing support to the club, he has instead decided, as per several reports relayed by Spanish media, decided to stay because even without playing, no club would pay him in the same way Barça do.

This is an end no one would have even fathomed happening. Not only is Umtiti’s essentially deadwood on the pitch, but a two-year monetary cancer off it. It is enough frustration that Samuel Umtiti is incapable of recovering his previous form. However, juxtaposing his on-pitch deficiencies to his sheer reluctance to leave knowing all well he wouldn’t play, makes this a heart-wrenching end to what should have been a beautiful story.

While in many ways the perfect defender for Barcelona’s style of play, injuries and inconsistency will forever leave fans wondering what could have been.