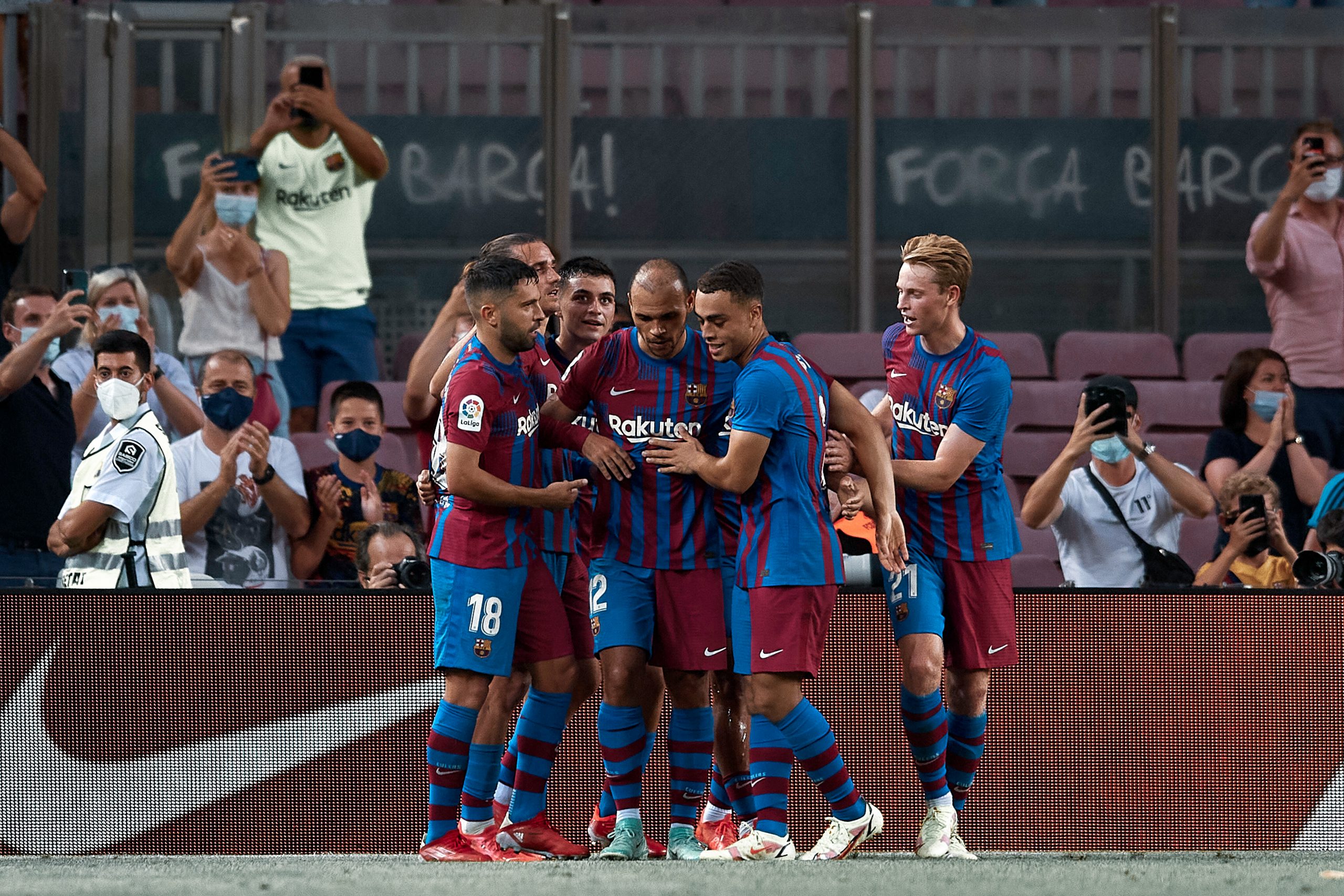 A Messi-less Barcelona embarked on their quest for a 27th La Liga crown with an encouraging 4-2 victory over Real Sociedad. The Blaugrana got into a comfortable three-nil lead, but a tense final ten minutes from self-inflicted damage almost caused an upset for the home crowd.

Thankfully, disaster was avoided and the 2021-22 season was a great start to another season of transition for Ronald Koeman and his men.

This first game without the six-time Ballon d’Or winner should serve as motivation for what is to come. In this article, Barca Universal evaluates Ronald Koeman’s forces in this episode of player ratings.

The Brazilian was barely troubled for most of the encounter. He made one brilliant diving save but could not be blamed for the goals he conceded. Neto showed some difficulty on the ball, but it did not tax the team.

It was not his best performance in the book, but there were many encouraging signs from the American right-back. He provided a constant offensive presence from the right flank, displaying his dexterity on the ball as well as his close control. More is expected from him.

The team’s vice-captain had a night to remember. Having cut his salary just last week, his sacrifice paid dividends in yesterday’s match as he was assisted by Memphis Depay. Overall he was excellent at the back, playing the ball out effectively and demonstrating his experience when up against his rival forwards.

On his official debut for FC Barcelona, Eric Garcia was impressive for Barcelona for most of the encounter. The Spaniard was a stable force in the defence, displaying great positional understanding and timing in challenges. He also played a huge part in the team’s second goal.

From the left flank, Jordi Alba was unfortunate not to have hit the back of the net or get an assist. His one goalscoring chance hit the post, and his would-be assist was intercepted, but it resulted in a goal nonetheless. Encouraging performance despite Messi’s absence.

In and out of possession, Pedri was as reliable as he has ever been. The Spanish international has been an amazing force in Ronald Koeman’s midfield, providing stability and continuity during offensive phases. His ball distribution was immaculate, and finally, finally, he took a shot on goal. He seemingly has a more attack-minded role in the team.

On his first official game as the first-team captain, Sergio Busquets had an average night. He kept the ball rolling, made a tactical foul to tidy up Alba’s defensive mistake in the second half, and overall gave some much-desired security in possession.

In the face of adversity, Frenkie de Jong showed his versatility, drive and hunger for success. His dribbling caused danger in the rival camp, and his one-touch passing saved the team from dangerous situations. Add to this his phenomenal assist to star man Martin Braithwaite, and you have a near-perfect performance from the number 21.

The most amazing thing about Griezmann is, regardless of whether or not he has an offensive presence in the team, he will, without a doubt, be productive. His work rate was an absolute joy to behold and was rightfully met with applause from the fans. He capped off a sensational performance with a pre-assist to Braithwaite. A sign that he intends to make Barcelona his home for the foreseeable future.

Rarely ever do players impress as much as he did, but Memphis Depay was absolutely fantastic for Barcelona against Sociedad. His flick to evade Zubimendi, his four key passes, and that sumptuous cross for Gerard Pique’s header, it was all worth savouring. The perfect introduction to the Camp Nou.

People tend to mock Braithwaite, but he deserves much applause for a lot of what he does. Yesterday night he was sensational in all departments. He moved fluidly between both flanks, positioning himself perfectly in the penalty box to score twice from four shots. In addition to this, he provided Sergi Roberto with an assist right at the end of the game to cap off a perfect return to action.

Coming on as a substitute, Roberto did a spectacular job at pleasing the home crowd. In his 20 minute cameo, he achieved a 100% pass success rate, and to cap off his decent performance. He calmed down some growing tension with a goal in stoppage time.

Little can be concluded from his debut for Barcelona, but he could certainly have performed better. A positional error on his part started what almost turned into a comeback for Real Sociedad. He should take this as a learning opportunity and learn to improve for the next game.

Playing just a few minutes, the involvement of these two players was not enough to be judged.