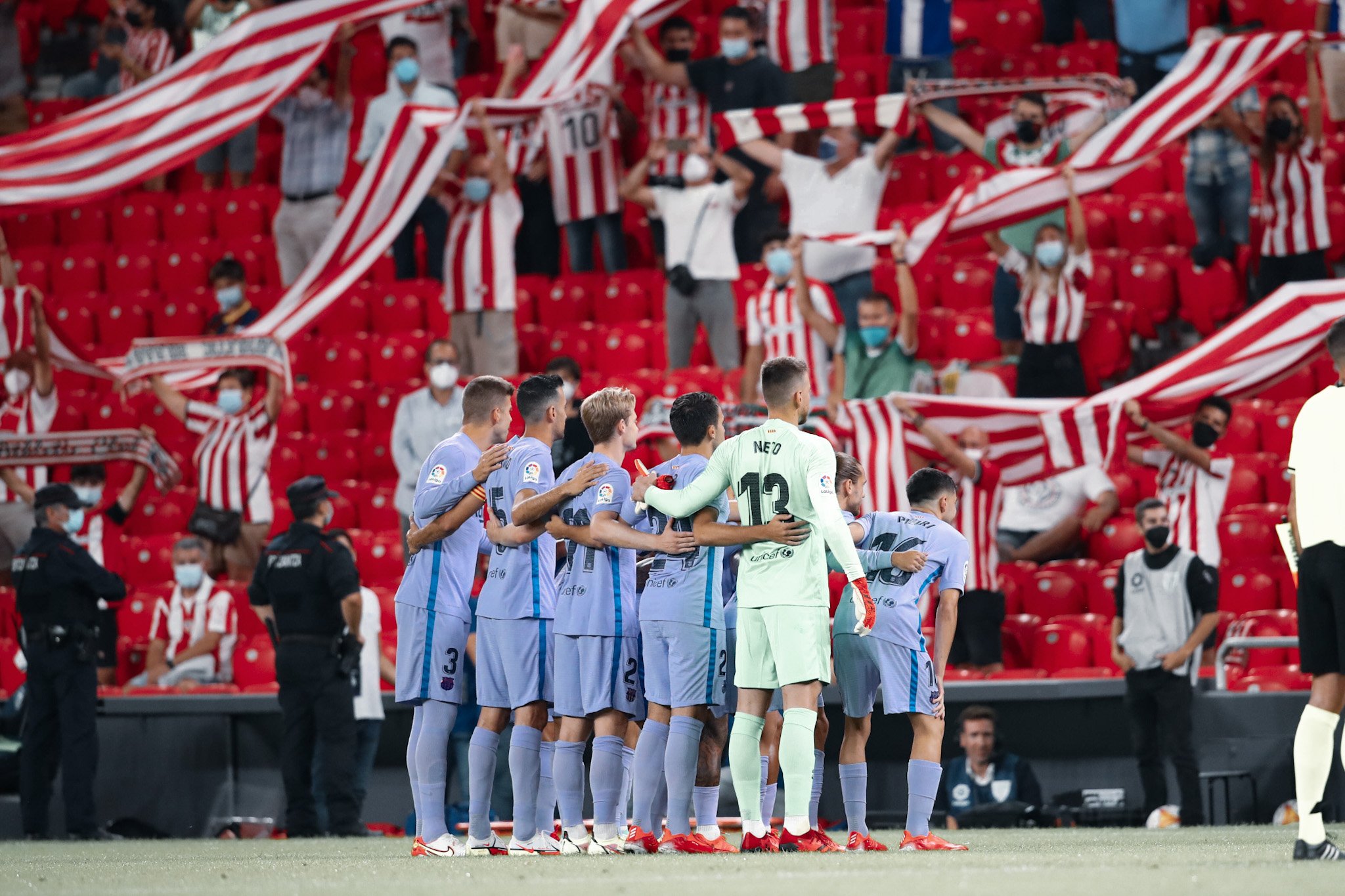 Barcelona played the all enthralling game against Athletic Club Bilbao, but just of the excitement was the hosts’ to enjoy. The Catalan giants were expecting a tough test against their Basque counterparts and failed immensely.

A majority of players were not at their best, and neither was their manager. In this article, Barca Universal evaluates Ronald Koeman’s forces in this episode of player ratings

Neto was not at the best he could have been. Throughout the match, he made costly errors and was told off by his center-backs on numerous occasions. His ball-playing ability on his feet, which is clearly his kryptonite, plagued the team for most of the encounter. The Brazilian made a few saves but was nothing special.

The start to his game was rather lacklustre. He was little offensive, as the impending fear of a counterattack made him rather timid in possession. In the second period, he was more confident and attacked a great deal more. His close control causes damage, but it was not substantial enough to make a difference in the scoreline. Better luck next time.

The Spanish international should not have played in the first place. Having lost his grandfather not too long before the match, he probably should have sat the game out. Against Inaki Williams and his brother, he suffered a great deal. He was completely lacking in pace, despite his ball distribution being immaculate. He ended his away debut on a red card, unfortunately.

Before leaving the pitch through injury, Gerard Pique had quite the match. Early on he was forced into making a number of clearances and showed his maturity and experience instructing, and encouraging his teammates early on when Athletic were at their strongest. Hopefully, he recovers soon.

Athletic Club did a brilliant job at shutting him down, but Alba didn’t do much to help his situation. Always with the same crosses to nobody, unchanging in style and not innovative enough to aid the team. Very average performance on his part.

The Barça captain had a reasonably good, although far from an excellent job in the midfield. Defensively he was not as strong as he ideally could have been, but he was sound enough not to cause problems himself. He could have had a more offensive presence, though.

Fatigue seems to have finally caught up to him. Pedri tried his individual best to create an impact on the game but did not manage to be as influential as he could. His distribution from flank to flank relieved the pressure, while his passes to the wider players generated numerous attacking opportunities for his side.

The best player in the field, Frenkie de Jong had a night to remember individually but one to forget in the collective. He made a crucial block to keep the scores level in the first half, and his offensive presence in the second could not be underestimated. All around he had a phenomenal individual outing. Clearly the man of the match.

This was quite a peculiar game for the World Cup winner. He was positionally homeless, occupying every role from the left winger to an ‘8’ in possession. He did not take a single shot — on goal —, and neither did he provide a key pass. He did, however, connect the midfield to the attack well, and was integral to the creation of the goal. Nevertheless, one expects more from a player of his caliber.

A disappointing night for the Dane. He had the single biggest chance of the match (0.51xG), and squandered it from point-blank range. He struggled to make a significant impact on proceedings and left the field of play without anything of substance.

The evening was not perfect for the Dutchman, but he individually gave his best. He created numerous opportunities, both out wide and in the final third. His phenomenal finish, a strong candidate for goal of the month, was not enough to hand the team the three points, but his overall performance might leave him justified in expecting a better result.

Coming on for Gerard Pique, he did a phenomenal job in defence. He was the last man standing between Barça and going 2-0 down. Unlucky to have his acrobatic effort ruled out.

Little offensive presence. He could have taken a few more risks on the ball. Overall he couldn’t get a foothold in the game and was forgettable on his official debut for the club.

Coming on as a substitute, Roberto did a quite commendable job. He kept the balance, and perhaps it’s his addition to the team that gave the team the lift it so desperately needed. Added to his good performance he got an amazing assist, meaning in his two cameos he both sealed a victory and squeezed out a draw. Maybe enough to convince Koeman to start him next time?