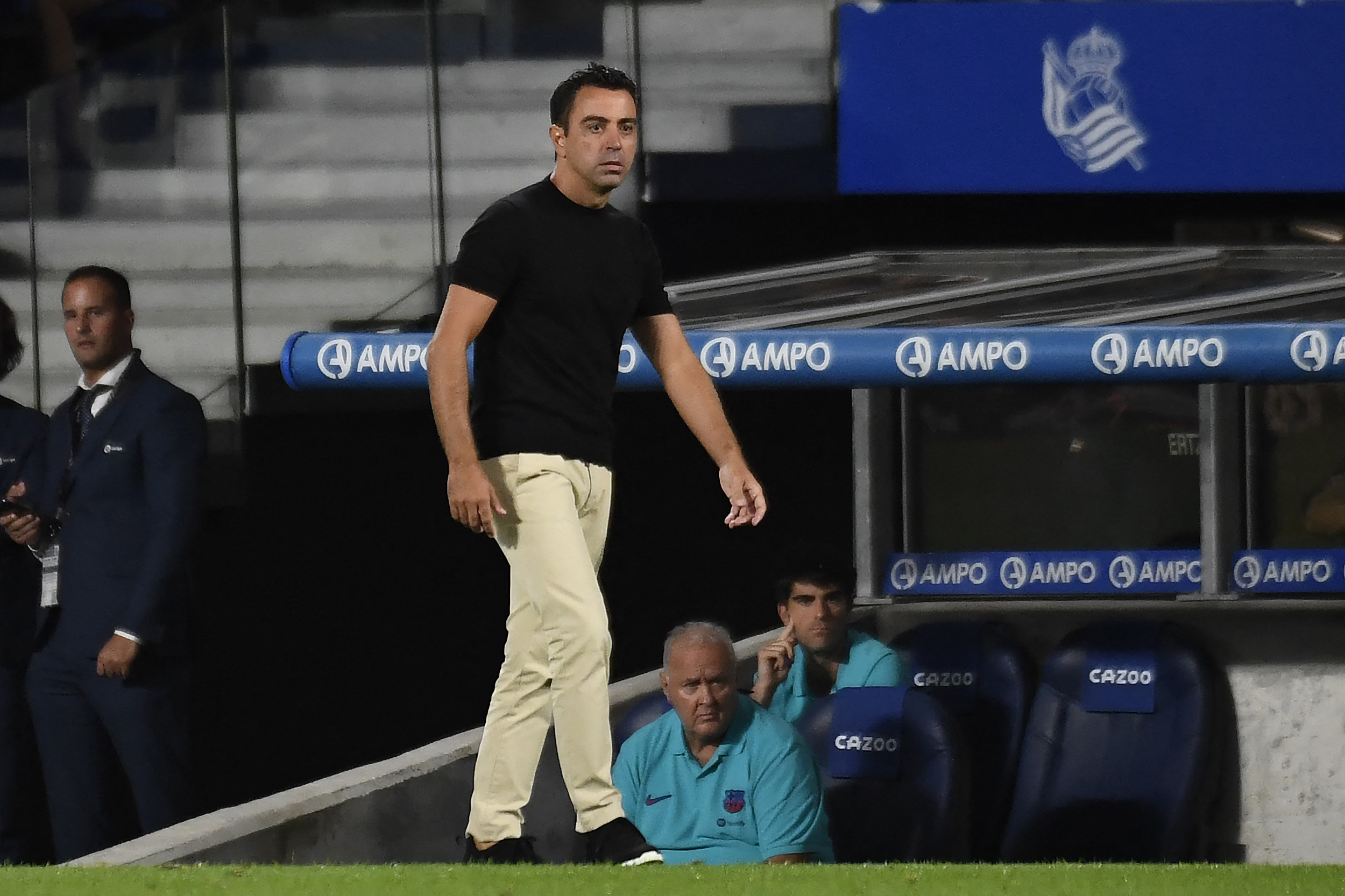 Barcelona will be hoping to extend their unbeaten start to the season when they travel to Andalusia to take on Sevilla at the Ramon Sanchez Pizjuan on Saturday.

After back-to-back wins over Real Sociedad and Real Valladolid, the Catalans will be aiming to bag another victory and keep up the pressure on rivals Real Madrid who sit atop the La Liga standings.

Looking ahead at the game, manager Xavi Hernandez spoke about the challenge that Sevilla will pose to his Barcelona side on Saturday, saying:

“Tomorrow we have a difficult game against Sevilla, we know how difficult it is to win at their stadium. Lopetegui manages his team well. I think their start to the season was not fair, they could have won more points. We will strive to play our philosophy and control the ball.”

When asked if he was happy with the club’s transfer business, he replied: “I feel comfortable now. The management did a great job. We have a competitive team and we have to prove that. Our goal is to win all the titles this season.”

On whether Jordi Alba was upset about the club’s late attempts to ship him off to Inter Milan on deadline day, Xavi said: “Alba is a player in our squad and he is key to the team. He will undoubtedly play during the season, but no player is safe from anything.”

Rating the team’s performance in the transfer window, he said: “I think our transfer market was between best and average because we couldn’t sign an extra player. But I’m not complaining.”

When asked about Gerard Pique and the negative press surrounding him due to his personal life, Xavi replied: “Pique is training very well and I don’t see him upset. I try to keep him happy.”

Memphis Depay was linked with an exit all summer long but ended up staying put as there were no takers for him after his move to Juventus fell through. Talking about the Dutchman, the Barcelona manager said:

“I spoke to him two or three weeks ago. He is an easy-going player with great experience. He is a natural leader, fully committed to the team. His participation will depend on his level, and we as a team will decide. This applies to all players.”

Further talking about Alba and his current situation, Xavi added: “I want Jordi Alba here. As a captain and because of our great affinity. At no time did I ever think that Alba was going to leave the club.”

On Alba’s competitors in Alejandro Balde and Marcos Alonso, the manager said: “Balde can play in other positions, not only as a left-back…Marcos Alonso too… There will be games for everyone.”

The manager also shed some light on the lack of game-time afforded to Pique and Alba, while insisting that they remain committed to the team.

“The decisions, with Pique and everyone, are technical. I have to make decisions based on what I see in training… When Pique plays, you guys would ask me why Araujo or Koundé do not play,” he said.

“The captains are helping a lot. Their commitment to the club and the team is impeccable, whether they play or not,” he added.

Xavi was asked if the senior players were overstaying their welcome, given that he himself had played less than half the games in his final season as a Barcelona player. In response, he said:

“It’s not easy to realize when it’s time to leave… It happened to me, I had an offer to continue at Barça when I was 35 but I understood that I had to leave and that will happen to everyone because we are not eternal. It happens to everyone, it will happen to Pedri when he is 34 years old.”

On the deadline day signings, Hector Bellerin and Marcos Alonso, Xavi said: “Bellerin is a player who grew up here, and he’s a great professional. I think it will help us a lot.

“Alonso is also a player who will help us a lot. I’m happy with them, and we had to support our two full-backs.”

Talking about Alonso’s registration with La Liga, he said: “Yes, we are optimistic. We are convinced that he will be registered on time.”

Touching upon the pressure that comes with being the manager of Barcelona, the 42-year-old stated:

“I know where I am. I know I am under pressure. The day I see that I am the problem I will go home. But that’s not the case now, I’m very excited and we’re working very well. Football and the ball will dictate the future.”

Xavi was reluctant to talk about Bernardo Silva, whose signing Barcelona missed out on this summer. “Now we can’t talk about it. Now we can only talk about those who are here at Barça,” he said when quizzed about the Portuguese international.

The Barcelona manager also expressed his sadness on having lost Pierre-Emerick Aubameyang, who joined Chelsea on the deadline day, saying:

“I feel sorry for all those who have left, even some of them who have known since May that they would have to leave… But, especially Auba, I feel very sorry for him. Auba is a treasure as a person. A role model. I will miss him a lot.”

Xavi was also full of praise for director Mateu Alemany and advisor Jordi Cruyff, stating: “Barcelona is in good hands with Jordi Cruyff and Mateu Alemany. Alemany makes you feel comfortable. He is really good at negotiating.”

Hailing the start to the season made by Eric Garcia, Xavi said: “He hasn’t changed a bit from last season. He is 21 years old and could be a captain. He’s at a great level.”

The Barcelona head coach also insisted that Miralem Pjanic will have a role to play despite his lack of game-time so far. “Pjanic can help us a lot. He fits the way we play and he will compete with Busquets, Frenkie and Kessie. It’s going to be difficult to get minutes for all four of them,” he said.

Ronald Araujo and Jules Kounde have been deployed at right-back at times this term. But with Bellerin’s arrival that could change. When asked who will be starting in the position against Sevilla on Saturday, Xavi refused to give anything away.

“I’m sure who will be the right-back tomorrow. Bellerín arrives today and he can help us a lot. There will be games for everyone,” he said.

Sevilla have made a poor start to the season and are yet to win a single game. Despite that, Xavi believes that Los Nervionenses will pose a challenge while insisting that manager Julen Lopetegui had done a fine job at the club.

“I always say it’s sad to judge coaches for results. Lopetegui did a good job with Seville. For me, it is not fair to judge Sevilla by the results they achieved at the beginning of the season,” he said.

Xavi was asked if the season would be considered a failure in case Barcelona do not win any trophies. In response, he said: “Come on, how can you think that? We’d better think we’ll win.”