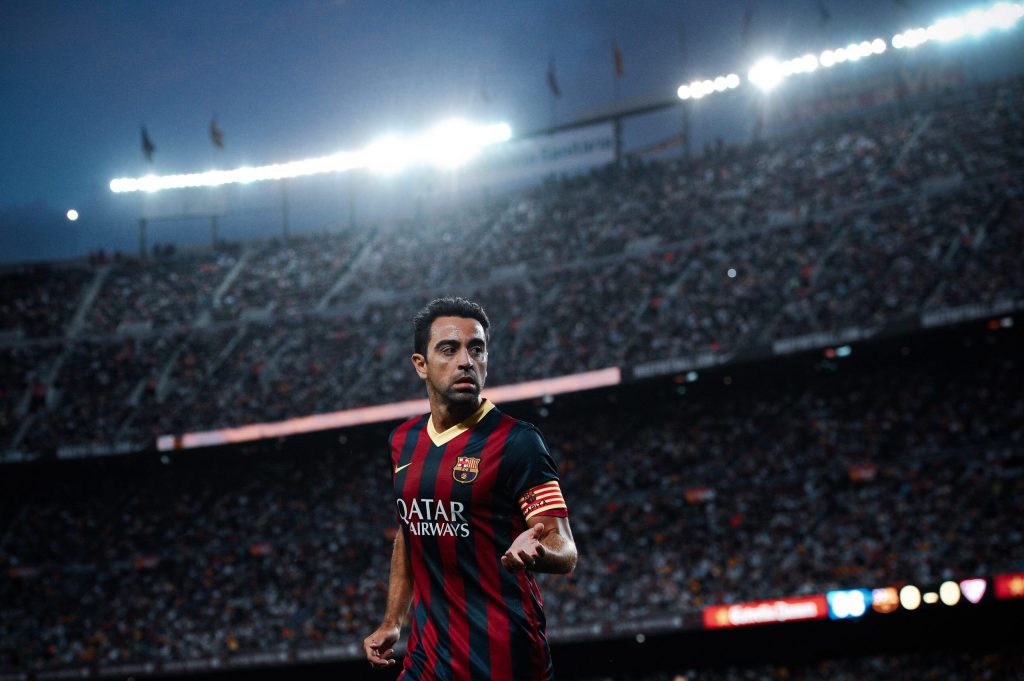 Xavi Hernández will go down as one of the greatest midfield maestros in the history of football. His control of the game, passing and understanding of the Barcelona system made him a hero for all culés. Over his career he won many major honours at both club and international level. His ability, combined with his professionalism, saw him captain Barça and remain at the club for the majority of his footballing career.

Despite his smaller size, Xavi Hernández was always destined to play with Barcelona. In an era where the perfect midfielder was seen as tall, strong, athletic and powerful, Xavi, along with Iniesta, redefined what a modern day midfielder should be. The Spanish playmaker was perfect to play the Barcelona way. For Xavi, his game was based of keeping the ball from the opponents, as if they do not have the ball, they cannot score. His relentless demand for control of the ball made him almost machine like in retaining possession. What also stands out is not necessarily the flashes of brilliance, but how simple he could make the game look. Just by doing the basics well, Xavi could dominate teams and dominate games from start to finish.

“Xavi changed football. He helped us to build, or to see, a new player profile that ended up running through all levels of the national team. He killed off the myth of physicality being above all else and opened people’s eyes to the qualities of small, technical players, proving that you can attack and also defend with the ball”
–– Julen Lopetegui

Road to the first team

Born and raised in Barcelona, Xavi Hernández joined La Masía at the age of 11. At the academy, his talent saw him rise through the youth teams. He was key for the Barcelona B team that won promotion to the Segunda divison by finishing first in the 1997/98 season. It is rumoured that the Barcelona youngster almost joined Milan. His father had given the go ahead but it was his mother, after threatening divorce if Xavi left Barҫa, that meant he stayed at his boyhood club. This turned out to be the right decision, both for the player and for the blaugranas. The next season, Xavi was promoted into Louie Van Gaal’s team and established himself quickly. In his debut season he won the league, playing 26 games and was named the 1999 La Liga break through player of the year.

“Xavi is the defender of the values of the greatest Barcelona team in history. He is the personification of a model based on effort and a commitment to touch and technique, that exquisite eye that Barcelona projected around the world”
–– Joan Laporta

After his debut season, Xavi Hernández began to establish himself in a more prominent role in the first team. With an injury to one of Barҫa’s most influential players, Pep Guardiola, Xavi took the opportunity and became a key performer in the team. On the ball, the La Masía graduate showed his quality with his vision and range of passing. His ability to retain possession, high pass success rate, ability to break the lines with passes and press resistance made him a perfect fit for Barcelona. But, the midfield maestro also began to develop his game in the final third too. An eye for goal in important matches and an increasing number of assists, Xavi was perfecting his game. In 2005 he was given the role as vice-captain and would go on to captain the team on many occasions.

Xavi Hernández, during his final La Liga game (as a player) for Barcelona at the Camp Nou | Photo by Lluis Gene / AFP via Getty Images

In 2008, when former team mate Pep Guardiola became manager, Xavi would establish himself as one of the best midfielders in the history of the sport. During the era of Pep, Barcelona were the dominant force in Europe. They set the standard for all teams on how to play football. At the heart of the team was Xavi. He set the tempo of the team and controlled the game along with his midfield partners, Iniesta and Busquets. Their composure on the ball and understanding of each others game is something that is unlikely to be seen again in football. Furthermore, Xavi stood out for his leadership and decisiveness in games. Over his career, the midfield maestro provided 236 assists at both club and international level. His 126 career assists in La Liga sees him placed second, only behind Messi, for the most assists in the competitions history.

“If Xavi has a bad day then Barcelona do not play half as well. He is the one that sets the rhythm of the game. His play allows the team to function. He’s different”
–– Johan Cruyff

There are many great achievements in the career of Xavi Hernández. One which shows the quality of passing, that Xavi possessed, is the record for most completed passes in a Champions League game. This came against Celtic in 2012, where the Barҫa playmaker completed 178 passes during the match. Another impressive achievement is holding the record for most appearances for Barcelona with 769 games played. One of his stand out games came against Real Madrid in 2009. In this game the azulgranas won by 2–6 with Xavi providing 4 assists. Hernández was also key in the Spain team that dominated world football by winning back to back European Championships and a World Cup in between.

“I don’t win prizes, I construct them; I get more enjoyment out of giving an assist than scoring a goal”
–– Xavi Hernández

The future for Xavi

The Barcelona legend will always be remembered as one of the greats to play the game, not just by culés, but by all football fans. He redefined the role of a midfielder and was untouchable for many years throughout his career. Currently managing Al Sadd in Qatar, it is almost certain that the former player will become the manager of Barcelona at some stage. Based on his time at the club this seems like it would be a perfect match. His leadership, professionalism and understanding of the style of Barça makes him an ideal candidate for the job. It would be great to see the midfield maestro back at his boyhood club.

Deep dive: Analysing the midfield of FC Barcelona
What did you think of this article?