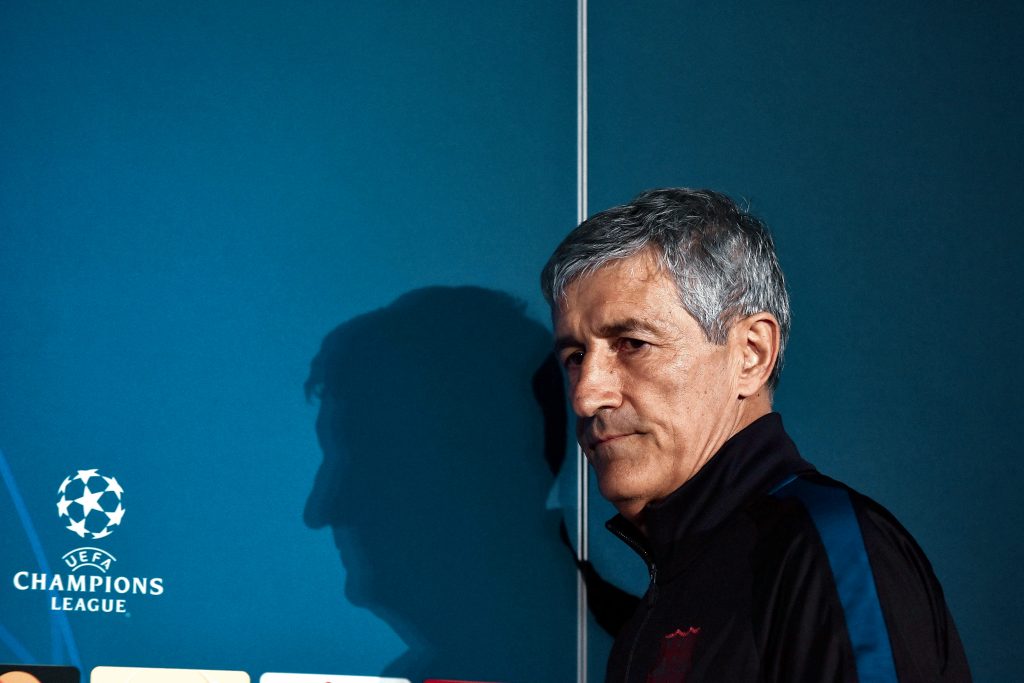 After last week’s loss against Osasuna, many doubts arose over the future of Barcelona manager Quique Setién, as there were rumours that the board could have been considering sacking him once the league was over.

Barça coach Quique Setién obtained his first defeat after the coronavirus break last Thursday against Osasuna. A defeat that could be classified as a failure or a disappointment as it was the same day that Real Madrid were crowned La Liga champions. Despite Los Blancos‘ 2–1 win over Villarreal already gave them the title, Barcelona’s loss brought even more frustration to fans. Fortunately for Quique, he managed to end La Liga campaign with a 0–5 away victory against Deportivo Alavés.

“We have talked a lot, and it has helped ease the situation for us”

Quique Setién has tried to implement some tactical changes at Barça compared to his predecessor Ernesto Valverde, but for several reasons, the changes between both managers has not been highly noticeable in the eyes of fans. In most games the team continues to have the same problems to kill off games and the impact in the third final can be minimal against compact low blocks. In addition, it is increasingly difficult for the best player in the side, Lionel Messi, to score goals or be more decisive from a tactical level.

Nevertheless, Setién has exponentially bolstered the defensive solidity by bringing out the best of Gerard Piqué and Clément Lenglet, by knowing how to accommodate Nélson Semedo at right-back, and by trusting Jordi Alba, who has found some of his best form this season after the return of football. Moreover, he has also given Barça B starlets Riqui Puig and Ronald Araújo the chances to adapt to the first team, apart from obviously 17-year-old winger Ansu Fati.

“We did our self-criticism behind closed doors. We didn’t have a great league season. We can’t let teams want the win more than we do. We need to be more consistent”

That said, current Barça B boss Xavier García Pimienta probably is the most prepared man for the manager post at FC Barcelona. Apart from his time as a player in the academy, he has been coaching in the lower categories of La Masía since the beginning of the 21st century, and little by little he has been climbing positions until reaching the reserves. A man who is full of character and knowledge and who possesses and transmits the Barça DNA as well as few others. But to what extent would it be sensible to give the job to García Pimienta at the moment?

Pimienta certainly deserves an opportunity in the first team. However, that opportunity should have probably come when Ernesto Valverde was sacked. After all Pimienta has done, and for being one of the few coaches who can fit in Barcelona, it seemed the right moment to promote him in January and inherit a squad that needed a fresh air in terms of tactics and youth.

But times have changed. In January the club hired Quique Setién and it doesn’t make much sense to dismiss him right now with the Champions League yet to be played. The Cantabrian received a weakened and very limited team in which he could not avoid the exits of the likes of Carles Aleñá, Carles Pérez and Jean-Clair Todibo. Furthermore, the Catalans were the leaders in La Liga with a two-point advantage over Real Madrid but with the worst points’ sum for more than ten years in the first half of La Liga.

Quique Setién possibly deserves to have a preseason, to start a new campaign by making his own decisions, to choose which players he wants to count on, and to have the opportunity to show his true football with the freedom he needs. Even so, García Pimienta is an almost perfect profile for this job, but not at this time, since it would mean wasting his undeniable talent by giving him a squad packed with problems.

“Now, we have the confidence we needed. We have done a deep analysis about the situation of the team. I certainly feel that I have the support of Messi and the rest of the team”

The best thing at present would be to keep Setién at Barcelona, to let him be in charge of the blaugranas in the Champions League, and then to trust him for the following season. If in Europe or in the following course everything crumbles, then there could come the real opportunity for García Pimienta. Yet, while not having Pimienta as the Barça coach is unfair to him, sacking Quique Setién would be much more unfair due to the poor circumstances he has had to deal with.