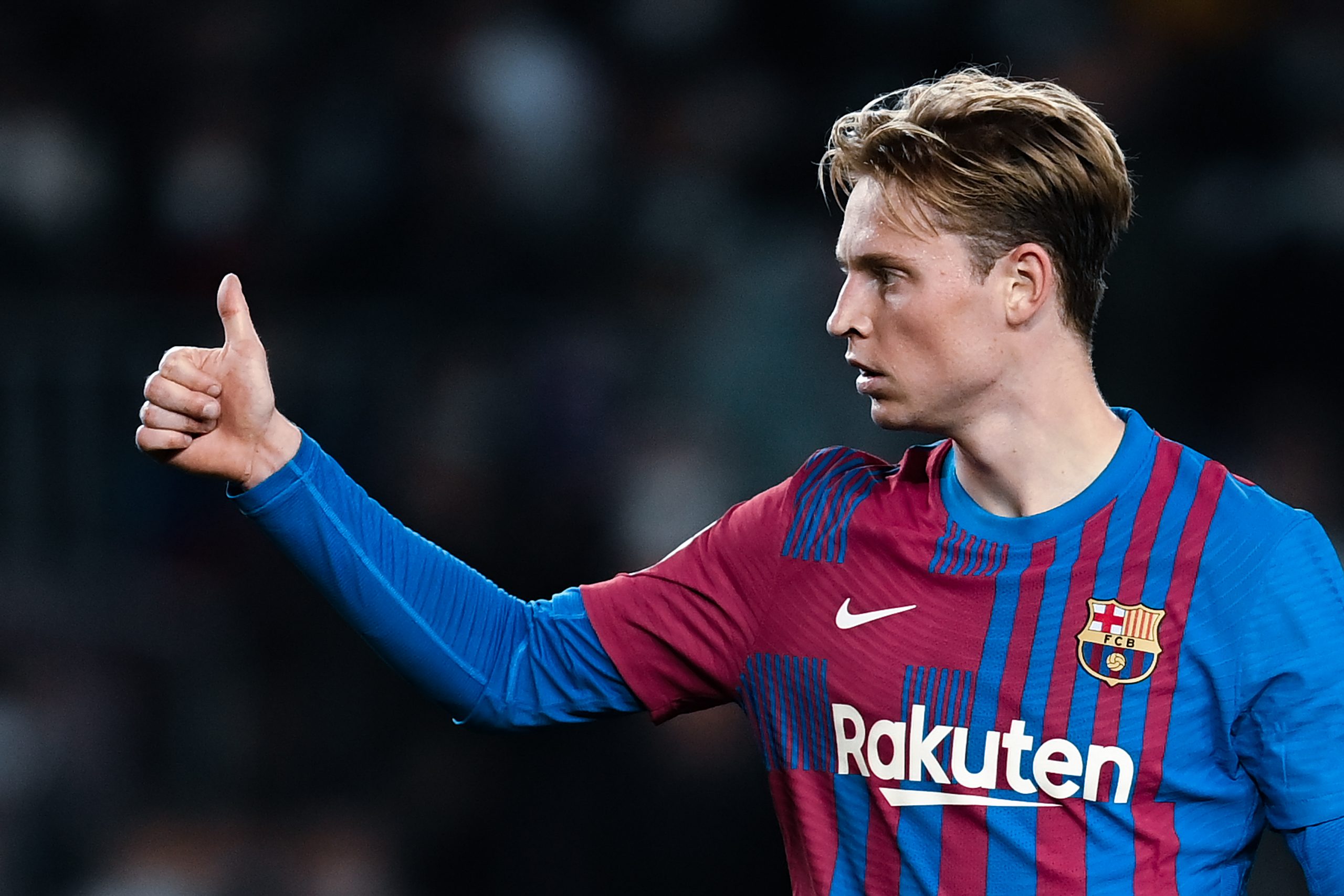 Have you ever walked up to your local doughnut vendor and found your usual order to come out tasting slightly odd?

Whatever your preference, be it chocolate, vanilla or caramel. Theoretically, a combination of the soft and fluffy ring-shaped bread along with the succulent yet satisfyingly gooey filling can’t go wrong. It is a match made in heaven, after all.

Yet, a little extra sugar on a day the vendor feels generous, or even a slightly bitter mix of chocolate can ruin your guilty pleasure. That feeling of disappointment placed alongside the sky-high expectation came with a sense of desolation.

Why bring in the comparison of food into a football article? Because Frenkie de Jong is Barcelona’s doughnut-gone-wrong, one that in theory should have been a match made in heaven.

The harrowing situation during his arrival

When Andres Iniesta decided to call it time at Barcelona, the world looked on as reality finally dawned on the club. The Catalans had come off probably the most dominating years of football by a single team that the world will ever see. The Spanish side has achieved it all and poised elegantly at the pinnacle of the sport. The hangover after went on for long, probably a little too long.

Yet, when the emotionally touching photo of the midfield maestro sitting down on the lush green lawns of Camp Nou all alone, reminiscing the years of glory and books of success he had achieved came out, every cules heart skipped a beat.

It was as if a thunderbolt hit every fan at the same time. Beyond the realisation that Iniesta was leaving Barcelona for another team, it was the acceptance that things were no longer the same. Instead, things were no longer going to be the same. The midfield trio that the world, for so long, regarded the most potent, skilled and magical one in the business was now the past.

Amidst such a desolate environment around the middle of the park, a young Frenkie de Jong walked into the streets of Barcelona with a dream to fulfil his childhood fantasy.

A rare gift at Barcelona: Patience

The vicious cycle for players arriving at Barcelona is unforgiving, to say the least. Every young star arriving in Catalonia, needless to say, with eyes full of dreams and fantasies, rarely receives the support and the passionate backing of the fans.

At Barcelona, one has been taught to expect nothing less than the supremely high standards set by Pep Guardiola’s legendary side. And though fans have been brought back to the ground and shown the harsh reality in the past few years, the same cannot be said about the times of Frenkie de Jong’s arrival.

When de Jong arrived, the city of Barcelona still saw castles in the air. Shouts of ‘treble season’ still echoed on the bustling streets of the beachside city, for one preferred avoiding the confrontation with reality.

The sky-high expectations come as a significant burden on those endorsing the garnet-and-blue for the first time. As if the pressure of playing for one of the biggest clubs in the world was not enough, the fine line between being a fan favourite and an abominate figure at Camp Nou can lead the biggest of stars to crumble. Yet, Frenkie de jong came in with an advantage over his fellow newcomers.

The Dutchman arrived in Barcelona in the summer of 2019. Around the same time, the Spanish giants also secured the signings of Antoine Griezmann, Junior Firpo, Malcom and Arthur Melo, amongst others. Yet, the former Ajax man was always given space to breathe while the others choked to their eventual departures.

No doubt, there have been occasions where Frenkie de Jong has been publicly criticised. However, one cannot deny the fact that the number 21 has also been comforted far more than any other new signing.

Maybe the Ajax connection that the midfielder carried with him or the imperious form he displayed for the Dutch side just the season before his arrival. Regardless, de Jong has been a bonafide starter since his arrival and has always had the fans’ backing.

Today, that very patience has started running out. For the first time, transfer rumours are entertained for the midfielder. The rapidly upcoming sensations in Pedri, Nico and Gavi put pressure on that player who was sought by every big team in Europe just three years ago. And while his time at Barcelona has not been bad, it simply has not been good enough.

The light at the end of the tunnel or a mirage?

Perseverance pays, or at least, so they say. In the case of Frenkie de Jong, that seemed to be the case in 2020-21.

After a dull debut season at his new club, the Dutchman slowly began to rise in prominence. Big displays against sides like Elche, Athletic Club and Real Sociedad brightened the spotlight on the rising star. On the other hand, he continued to be an integral part of the side even when he finished without direct goal contributions.

Something finally seemed to be working for de Jong. The introduction of Pedri was one factor that reduced the defensive burden on his shoulders. However, one fathom the critical factor to be the arrival of Ronald Koeman.

The midfielder worked with the Dutch manager for a couple of seasons in the past. Koeman’s connection with Frenkie was supposed to be a major argument in the manager’s favour. The expectation was natural, especially given the high-class performances that the midfielder regularly produced under Koeman for the Dutch National Team.

In 51 games, De Jong put up impressive numbers last season. Not only did he find the back of the net seven times, but he also assisted eight goals. To be more specific, the young star turned up the heat in the second half of the season.

Koeman deployed the midfielder in a more advanced role. Under Quique Setien and Ernesto Valverde, the 24-year-old had been placed in a more defensive position that did not get the best out of him. The solution seemingly lay in a tactical adjustment, one that the incoming Dutch manager made.

In his new niche, the former Ajax star showed glimpses of the terrifying player he was at his ex-club. Perplexing runs between the lines, positional mastery and flawless passes once again returned to his game.

Expectations: The boon that turned bane

Expectations at Barcelona can be likened to a cup that never fills, even when placed under a continuously gushing spring. With every additional ounce of water that seems to fill it, the cup grows an inch deeper. As illusional as it may sound, it is an axiom of life.

Frenkie de Jong has hardly been at the receiving end of criticism. Like favours showered upon their dearest child by parents, he has been given the benefit of the doubt, even on bad days. However, with every favour comes a contingent. It is now that very contingent that threatens to bite him.

The past few months have seemingly been the most difficult times that Frenkie has had to endure since his arrival three years ago. A 1032 day roller coaster spurted a cumulative reaction from supporters, for the topsy turvy ride did not provide enough consistency for one to be convinced.

It was known that, on his day, the youngster could tear apart any team in the world. Yet, the sheer irregularity of game-defining displays led to doubts creeping in. His frustration at the criticism began to show up last month when he openly spoke about it.

“I accept criticism, but I disagree when people say I don’t work hard enough. I think my statistics were good last season, especially considering the number of games I had to play as a central defender.”

Indeed, he did not have the best of starts this season. Under Ronald Koeman, de Jong seemed lost in the team this term. The player who defined multiple games towards the end of the previous season looked out of sync. Haphazard passing and a lack of verticality began to define his performances. The same player who looked like a machine under Koeman previously at the Dutch National team again seemed misplaced.

The arrival of timely change: Will it be enough?

Frenkie de Jong is a player who plays to the system. His best performances have come when the team played with a clear cut plan and defined roles. Likewise, his pitfalls coincided with the days Barcelona seemed lost as a unit.

While the former manager did come in with a clear idea of the system he wished to implement, the blueprint faded with time. By the dawn of the 2020-21 season, Barcelona were playing as 11 fragmented pieces running aimlessly in the hope of fitting together. Irrespective of the system deployed, the strategy was to pump balls into the box, hoping that someone would head it in.

The lack of a transparent system could be part of, if not the primary reason, why de Jong disappeared for his club this season. As pointed out by Oscar Mingueza, the dressing room had lost faith in Koeman towards the end of his tenure. Unsurprisingly, the player affected the most by the fragmentation of the team was the one whose game depends on the play of others- Frenkie de Jong.

Under Xavi, Barcelona hope to restore a clear system. The club legend has shown that he is concerned with building a lineup based on positional requirements, unlike former managers who made a structure based on player names. In such a situation, the Dutch protege should shine, at least in theory.

“I’m back in Barcelona. And I’m sure that something special will develop here with Xavi. This team has so much quality, and even more so with players returning from injury. I’m happy to be back.”– the midfielder said at the end of the recent international break.

If Barcelona’s opening game under the former midfield maestro is anything to go by, things look promising for de Jong. The former Ajax star looked more involved in play than he ever looked earlier in the season. His game had a good chunk of forward progressing passes, and his ability in tight spaces looked seamless.

Xavi said in the post-match press conference against Espanyol that de Jong needed to take more responsibility. This is the best chance the youngster could have hoped for at the opportune moment. To train under his childhood idol is a dream come true now for him. Yet, it is as much of a dream turned reality for his competitors in midfield.

Barcelona’s mine of midfield talents is extensive. At the rate with which new stars are breaking into the first team, de Jong cannot afford to let his peak delay any longer. Working with Xavi could bring the best out of him. Yet, at the moment, it is more of an obligation than an option for de Jong.