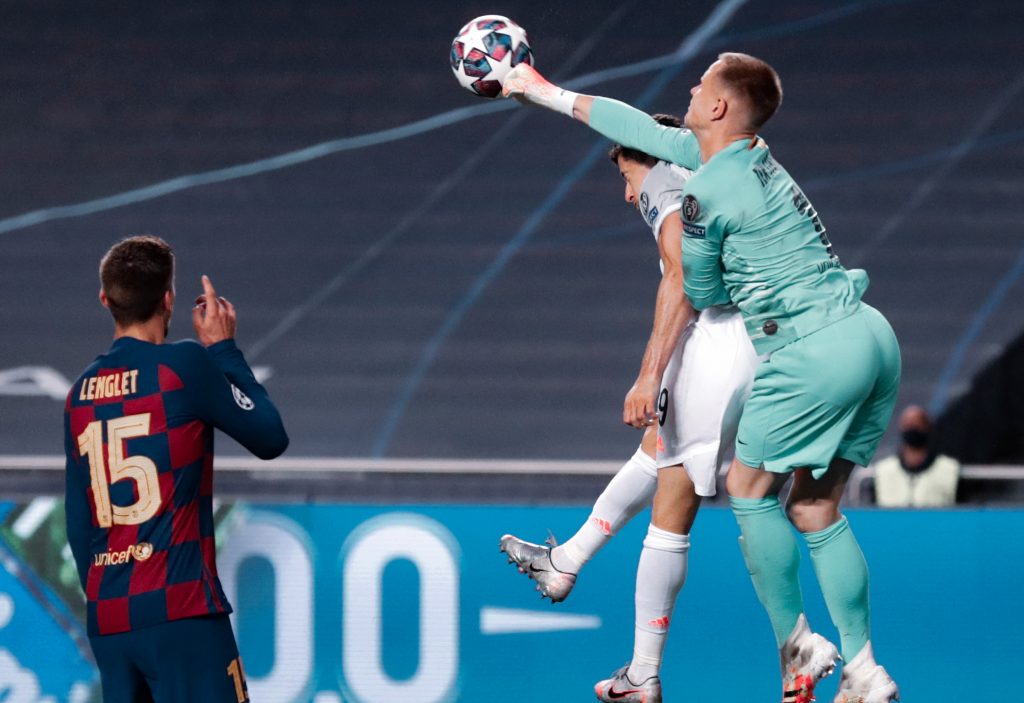 A night to forget against Bayern Μunich for Barcelona and, particularly, for Marc-André ter Stegen. But, despite conceding eight inexcusable goals, the keeper has earned the right to not be pinpointed all hate.

Misery, chaos, embarrassment, shame, pity, loss –– all these words are not enough to describe how Bayern Munich roasted Barcelona without remorse on Friday night. While the club and its fans are in pain, 28-year-old keeper Marc-André ter Stegen is under persistent criticism attacks since his heads-down performance in the Champions League quarter-finals. Ter Stegen made history by conceding eight goals –– EIGHT. This happened for the first time in the Barça’s history since more than 70 years. With this, the long going debate of being Germany’s number 1 came to an end for many as Manuel Neuer took the lead in the race.

The loss is real and frustration, understandable. However, one bad game has changed it all for the blaugranas‘ goalkeeper. Ter Stegen has been accused of being a bad keeper because of this unfortunate match. It is indeed sad how the anger and annoyance of disheartened fans made them forget his role during the whole season. The culés often forget that football is a team game and it demands team effort: over-relying on Lionel Messi and Ter Stegen won’t help them every time.

Realistically speaking, when the club is in shambles, how can one blame a single member of the squad? When the defence is weak and the overall team is giving an infuriating performance, how can one expect from the keeper to bring a miracle to stop the tide coming in from the other end? When all passing lanes are covered and there’s no option but to clear the ball and see how the Bavarians are superior in duels, how can one expect the keeper nothing but to give the ball away?

It doesn’t get much worse for a goalkeeper than conceding eight times, but the blame should be shared | Photo by Manu Fernández / Pool via Getty Images

That said, Ter Stegen’s performance facing German giants cannot be justified. Something was up with him. Something was wrong. The footwork was not usual. The confidence, shattered. It seemed as if he has been possessed or was jinxed. The goalkeeper who is known for saving the team became painful to watch. And it all happened in ninety minutes.

From a tactical point of view, yes, distribution and other factors down to the system were adding to his horrendous performance, but the number 1 was clearly not himself. He was not who he has been during matches like this before. Time and time again he faced similar situations where pressing was going around him and rivals were blocking his passing options but he came out clean making his teammates proud. What went wrong on Friday, then? This could come down to one answer: Manuel Neuer.

Everybody knows that the proxy war between the two Germans has been going on for a long time now. The flickering rivalry between both the keepers was a point of discussion before this game as well. Since things went quite ugly before, it was predicted that there would be pressure on both to do better. Conversely, the pressure hit the younger keeper alone, making him anxious. At least his performance was giving that impression. Five of those eight goals could have been saved, but he failed. He was nervous, he was scared.

Nonetheless, there is a reason why Die Mannschaft‘s international has been called the Lionel Messi with gloves. He has given hope to the Spanish squad and his lovers by saving struggling matches uncountable times. Putting the Argentine aside, if there’s anybody among Barcelona who is reliable as well as capable of becoming a saviour for the team during difficult times, that’s him.

“Really hard times. I feel really sorry about what happened yesterday. I’m disappointed. I don’t want to look for excuses because there are no excuses. We certainly need a change”

Marc-André ter Stegen
on social media after the Bayern defeat

Ter Stegen’s loyalty and admirable performances for Barça have been proven throughout this season’s La Liga and even before that. Without a shadow of a doubt, for years, he has proven himself to be the best possible goalkeeper for the azulgranas. Even so, the fickle behaviour of masses is questionable. It’s disturbing how the aforementioned points are not being considered and the errors he made in one clash suddenly wiped out his contribution towards the club.

Some say Ter Stegen is a glorified bottler, other comments on how he doesn’t deserve to be in the top five. Some want him to be sold, rest comment on how Neuer strolled. Nobody, thus, says that maybe the poor man was too eager to save his teammates that this fear of losing made him do the mistake of writing the history of a bewildering defeat. And this is a mistake that needs to be forgiven when it comes to Marc-André ter Stegen.