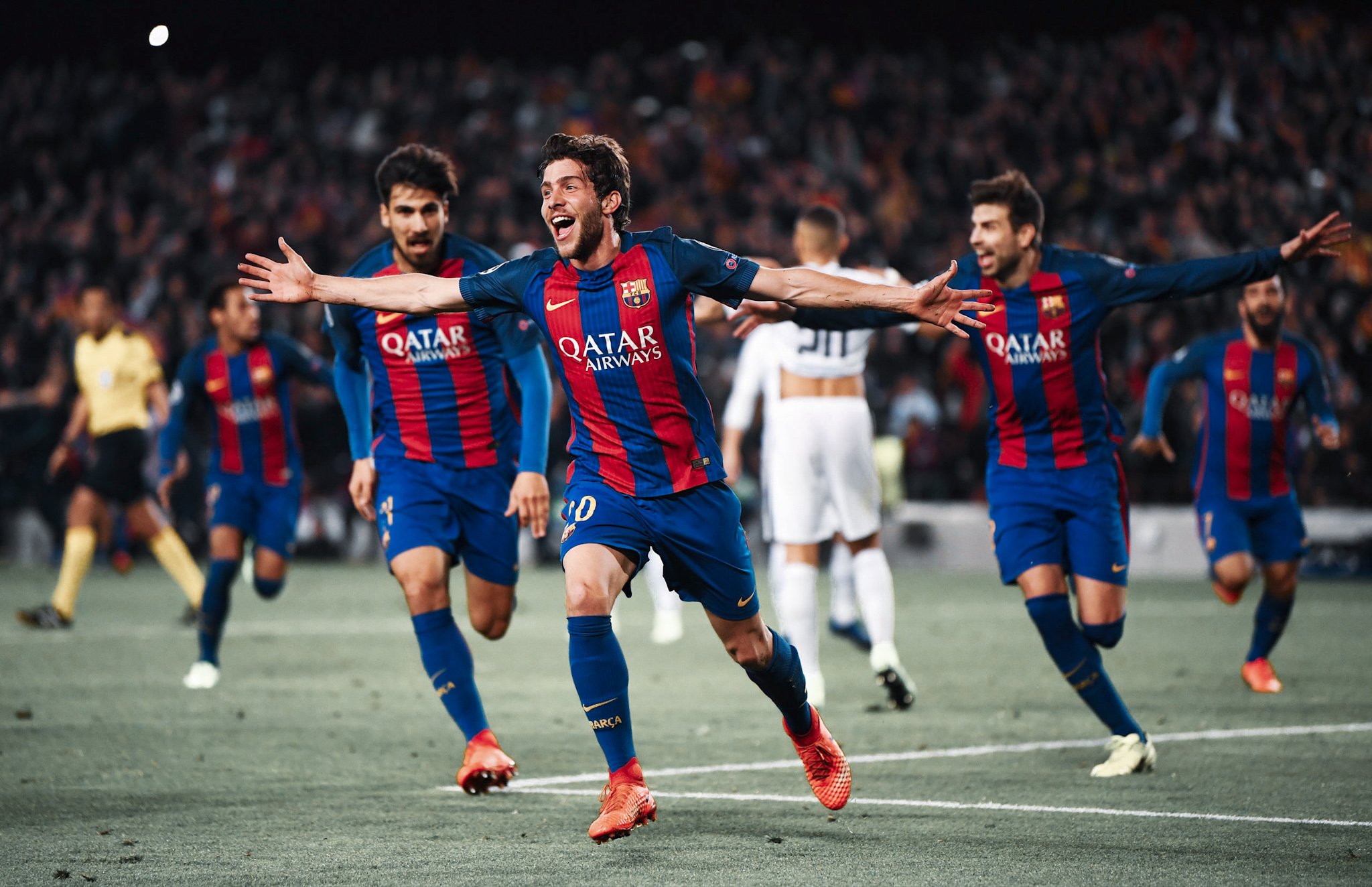 Barcelona could not have faced PSG at a better time, for the capital outfit are going through similar problems as the Blaugranas, and are at the nadir of their powers.

Barcelona’s loss to Juventus frightened Culés for many reasons, and rightly so. First, the system on show against the Old Lady was abysmal. The Catalans suffered a humiliating defeat at Camp Nou, and it was partly because of their tactics. Also, the result meant Cristiano Ronaldo’s teammates would leapfrog Barcelona in the group and top it.

After finishing in the second place in the group for the first time since 2006, the sleeping giants feared most group toppers. Realistically, sides like Bayern Munich, Liverpool or Manchester City could have obliterated Ronald Koeman’s men. Following the humiliations against Bayern, Liverpool, and AS Roma, there was only so much that the fan could take.

The draw for the Champions League round of 16 took place on Monday, after Barça’s shaky win against Levante. Thankfully for the five-time Champions League winners, Bayern got Lazio, Liverpool got RB Leipzig, and the draw pitted Marco Rose’s Borussia Monchengladbach and Pep Guardiola’s City.

Not getting the three best group winners was a relief for the Culés. However, the Catalans drew a familiar face this time: Paris Saint-Germain.

The Parisians reached the Champions League final in 2020. They lost it narrowly to Bayern, who beat Barcelona 8-2 en route to the treble. After getting such a clement draw, compared to what could have been sides, Barça are under a lot less pressure.

Paris and Barça have a bit of a history in the competition. Ever since QSI took over the French capital’s club, they have dreamt about winning Europe’s premier competition. The “Rêvons plus grand” (Dream bigger) slogan has echoed in the French capital, in the voice of, Nasser Al-Khelaifi wanting to make of PSG the best team in the world. Barcelona have stopped them thrice.

Barça were ruthless with the Nouveau Riche French champions in 2013, 2015, and 2017. In 2013, they eliminated a competent PSG side on away goals. Then, prime Luis Suares showed David Luiz no mercy nestling two shots into the goals. Finally, Neymar became Paris’ butcher in the 6-1 Remontada in 2017.

It would be fair to say that PSG would not like to play against the La Liga side. However, the Barça sides from yesteryear are a far cry from what Ronald Koeman has managed to conjure.

Koeman’s men are eighth in the league and have only drawn Paris because they finished second in the group. They have started the season appallingly, and the eyebrows have begun to be raised over the Dutchman’s future already.

With their captain not wanting to be at the club, and linked with PSG themselves, and a squad bereft of confidence and tactics, chances looks bleak for Barcelona. How can Barcelona have any hope ahead of this tie?

Well, after talking about the weak Catalans’ woes, it is time to look at Thomas Tuchel’s men’s problems. The French champions have issues all over the pitch, which, if they can improve in time, then they will surely beat Barça, but the path is long and unbewildered.

First of all, Tuchel is lost at the Parc des Princes. The German coach received lots of criticism from the French fanbase because he has simply not done a good enough job. The French press and fans feel like the coach is too lucky and that his tactical system is incoherent on a lot of levels.

His tactical choices have cost him a lot. Ole Gunnar Solskjaer’s Manchester United tactically outclassed the French side away in Paris. Tuchel played a midfield bereft of creativity and a defence arguably shakier than Barça’s.

Moving away from the United game, PSG had two abysmal performances against RB Leipzig. The Germans heavily dominated the Frenchmen, and they deserved more than the results they got. Away in France, they lost to a generous penalty and bad finishing from their part.

They were rather lucky to finish top of their group even though they were nowhere good enough, with the same shortcomings mirroring themselves in Ligue 1.

Usually, Neymar and co. dominate the league to a fault by this point of the competition. They obliterate it and are crowned Champions by March. After that, they can focus on the Champions League.

This time around, Paris are part of a title race. Lille have attained momentum, and are first in Ligue 1, while Olympique Lyonnais just beat PSG at the Parc des Princes, and even Marseille could be top after their two games in hand.

This scenario looks just like the 2017 season. Monaco had a stunning year and won Ligue 1 that campaign. Unai Emery’s PSG, utterly lost, shipped six goals to Luis Enrique’s defective Blaugranas. This year, PSG do not look like one of Europe’s biggest forces, and they do not even have Ligue 1 secured to focus on one competition.

They lost their first Classique in 10 years against Marseille at home. Moreover, Lens beat them at the start of the term. Bordeaux could have beaten them had they not missed their finishing boots, while Monaco came back from 2-0 down to beat Tuchel’s men 3-2. Finally, Lyon dominated the play away from home to overtake them in the league.

These results stem from the manager’s tactics, but the current institutional crisis in Paris does not help. Leonardo came back as chief executive in 2019 but looks a shadow of his former self. The Leonardo of 2011 assembled a promising squad and managed to get Carlo Ancelotti, a world-class coach for the Parisians.

In his second year, Leonardo brought in Danilo Pereira, who is yet to replicate his earlier form, a promising but lost striker in Moise Kean, a complacent Mauro Icardi and Alessandro Florenzi.

Leonardo has started a war of words with Tuchel over the preferred postion of Pereira. The Brazilian looks like he will be unable to reassemble a PSG side as incredible as the one he assembled nearly a decade ago.

After looking at the inadequacy of PSG’s board and manager, it is time to analyse the players. In the end, if they can show their quality against Barça despite all the adversity, they might go on and reach the promised land.

For Kylian Mbappe, it feels like the precocious Frenchman has stagnated in recent year. After getting his wanted number 9 position, Mbappé looked like a shadow of his winger self. The 21-year-old went through a goal drought in the Champions League and did not score for 10 games. When Neymar won a penalty against Istanbul Basaksehir, he gave it to Mbappé, almost too generously.

Do not get it wrong, the World Cup winner is still an insane talent. He usually terrorises Ligue 1 sides, and he has stagnated, not regressed. Fans and pundits thought Mbappé would become a better player than he is now, but he is still performing at a level which is still more than acceptable, and enough to pull a dagger through the Blaugrana heart.

Now, let’s look at Neymar. The Brazilian is one of the best players in the world. And you need not look further than the game against Atalanta to prove that. The winger has nearly perfected his game, and he is Paris’s hope when things go south, and he demonstrated it against Borussia Dortmund last year.

The Brazilian scored in both legs to get his side through after Erling Braut Haaland showed no mercy in the same game. When Neymar is at his best, he is arguably the best player in the world.

However, his return to the Camp Nou might be in jeopardy. As PSG lost to Lyon, Thiago Mendes went in with a reckless tackle and Neymar was stretchered off. Reports are saying that the talisman might be out for thee weeks, but it looks far from official, which is scary for the Parisians, who do not look like the same team without the #10.

All in all, Paris Saint-Germain, while not being the best side to face with Barça’s shortcomings, are not as terrifying as others. A good result against PSG and qualification to the Quarters will help the Catalans go on a good run in the Champions League, the Catalans dearly need their confidence back.