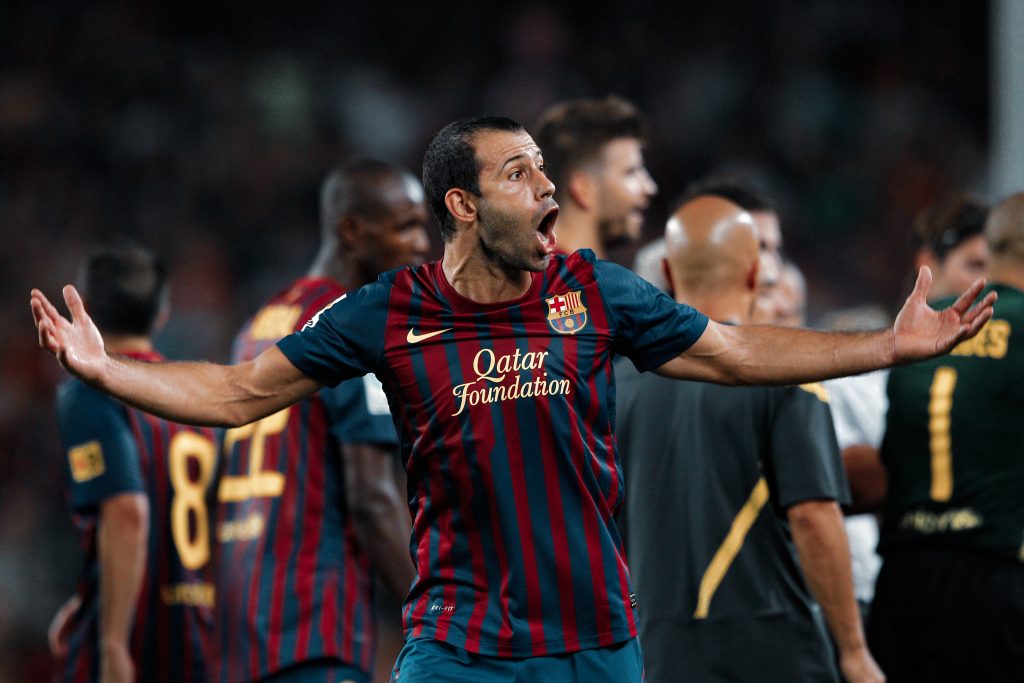 Mascherano didn’t have a great body for a centre-back and had to adapt to a new position in Barcelona. Since his arrival, he imposed his effort and leadership, and was not afraid of anything. After giving everything, he had to leave the club and since then the club has not found anyone like him. Why does Barça still miss Javier Mascherano?

The lion. The maestro of the clean tackle. There is not a day when Barcelona’s defence does not miss Javier Mascherano. A player whose nickname says it all: El Jefecito, the little chief. His height opposes to any characteristic sought in a centre-back. Mascherano was a small player, but he had a level of lethality and mentality as high as the peak of the mountain. Let’s analyse in more detail how someone who only played as a pivot could become one of the best centre-backs in the last decade.

Mascherano arrived to Barcelona in the 2010/11 season and was quite a controversial signing at the time. The club urgently needed a quality centre-back to rest Piqué and Puyol. Likewise, the departure of Rafa Márquez that summer further supported this decision to bring in a new defender. Instead of bringing a player from this position, though, the club signed Javier Mascherano. At the time there was only one position in which the Argentine played and in which he stood out at Liverpool: holding midfield. Instead of Márquez’s replacement, he seemed like a substitute for Yaya Touré, who also departed to Manchester City that summer. Few understood this movement. Moreover, the rhythm, fast play in the movement of the ball, possession, and Busquets’ spot were other reasons why this acquisition seemed really unnecessary. But we were wrong.

❛ He received me with classical music and a phrase that I will never forget. ‘You know that you¡re coming here to not play, right?’. I told him ‘Be calm, with me you’ll have no problems’ ❜

This player had something that made Guardiola fall in love with him. This was his maximum concentration over the full 90 minutes, his powerful character, hunger for titles and ambition to earn a place in the team. These features that didn’t depend on his football talent led El Jefecito to adapting in such a short time to one of the best sides in history. It was a surprise for everyone.

Although his height was of around 1.74 meters and the average of someone in his position is 1.83 meters, Mascherano compensated his small stature with his other attributes. His skills were key for the functioning of the blaugrana’s game. He had a great tactical mind when it came to positioning. This allowed him to intercept the opponents’ passes with great ease, adding that he was an expert in tackles. Without a doubt, one of the best in the world in this latter aspect. When it was necessary to crawl on the ground, Mascherano was there. The most impressive thing of all was that he rarely committed fouls. It was more than a couple of times that one of his tackles saved Barcelona from conceding a goal.

In the matches against teams that liked to cross the ball, Busquets and Mascherano were in charge of partnering perfectly to avoid conceding goals. Busi, taller than El Jefecito, exchanged positions with the Argentine to be the one to cover the attacker in the aerial game. On the other hand, Javier placed himself in a strategic position to block shots since, thanks to his reflexes, he could guess where the distant shots of the rivals went in case they did not choose to cross the ball.

❛ Mascherano. He has a spectacular view of football. Whenever I talk to him, he tells me something new; he notices things you don’t. He really understands the game ❜

When it wasn’t his turn to defend, Masche also kept what made him so brilliant at Liverpool. He was able to start the play from deep and had a key task in breaking lines by carrying the ball forward. When the ball didn’t reach Busquets, who was in charge of starting the plays, Mascherano became a quarterback to throw distant passes with a high level of effectiveness. Barça normally plays with short passes in possession, but on certain occasions, and to be more unpredictable, Mascherano appeared with those long balls to surprise the rivals. The opponents had nightmares playing against the Argentine warrior.

❛ I would never ever sell him and I wouldn’t swap him for anyone. I never expected him to give us as much as he has: his value is unimaginable. He has been spectacular as a player and a person. Javier Mascherano is the best signing this club has made in four years ❜

Likewise, it cannot be forgotten what made Pep fall in love with him: his character and concentration. Javier was the favourite soldier of his commander, Guardiola. That tenacity, that effort to achieve his goals, the constant fight with himself to end up becoming an important player. He knew that each play was a goal opportunity, either for the rival or for his team. If he had to sacrifice his physical condition to avoid a goal, he did it, because for him the play did not end until it was over. His toughness and physique allowed him to fight against the biggest beasts in football. He wasn’t afraid, and he could face anyone.

Pep Guardiola worked with a rebel Mascherano, a player who loved physical contact and who did not know what possession football was. Guardiola taught him very well, but he taught him to exploit more of his potential in the long-term, not in the short-term. Unfortunately, the former Barça coach couldn’t enjoy the warrior he created. With Pep, Mascherano was still developing and learning every day from him. When Pep left, Masche evolved into a mature player and a leader.

Mascherano was the perfect student for mentor Guardiola | Photo by Imago

When Luis Enrique arrived, Javier seized all the potential he had learned from his predecessors. It was, for many, the best time of his career. He continued to maintain the concentration and serenity during the 90 minutes of each game. He also kept that clean tackle that defined him so much. But now he was also a perfect player for Barcelona, ​​as he already understood the short passing game and was already more complete than ever. All these tools, along with his motivation to want to excel, led to him being nominated for the Ballon d’Or in 2014 and 2015, in addition to being included in the best XI of La Liga in the 2014/15 season.

Thanks to his work ethic, the warrior who once arrived at the gates of the Camp Nou without any possibility of adapting ended up being one of the captains of Barcelona when his teammates chose him in 2015 as Xavi left a vacant. He also became one of the top 5 foreigners with most appearances at the club, along with Messi, Koeman, Alves and Cocu.

❛ I was lucky because 7 years ago, I came here to fulfil a dream and now it is time to wake up – the dream is over. The dream has lasted longer than I imagined, but the time has come to say goodbye ❜

Javier Mascherano
on his goodbye to Barça

After 8 years at the club and 18 official titles, Mascherano decided in January 2018 to have a new experience. 2 years after that event, Barcelona has not found him a replacement with characteristics similar to him. The Catalans need another player with Masche‘s attributes. Unfortunately, it is almost impossible. Javier Mascherano was unique and it will take many years to see someone similar defending the red and blue shirt.