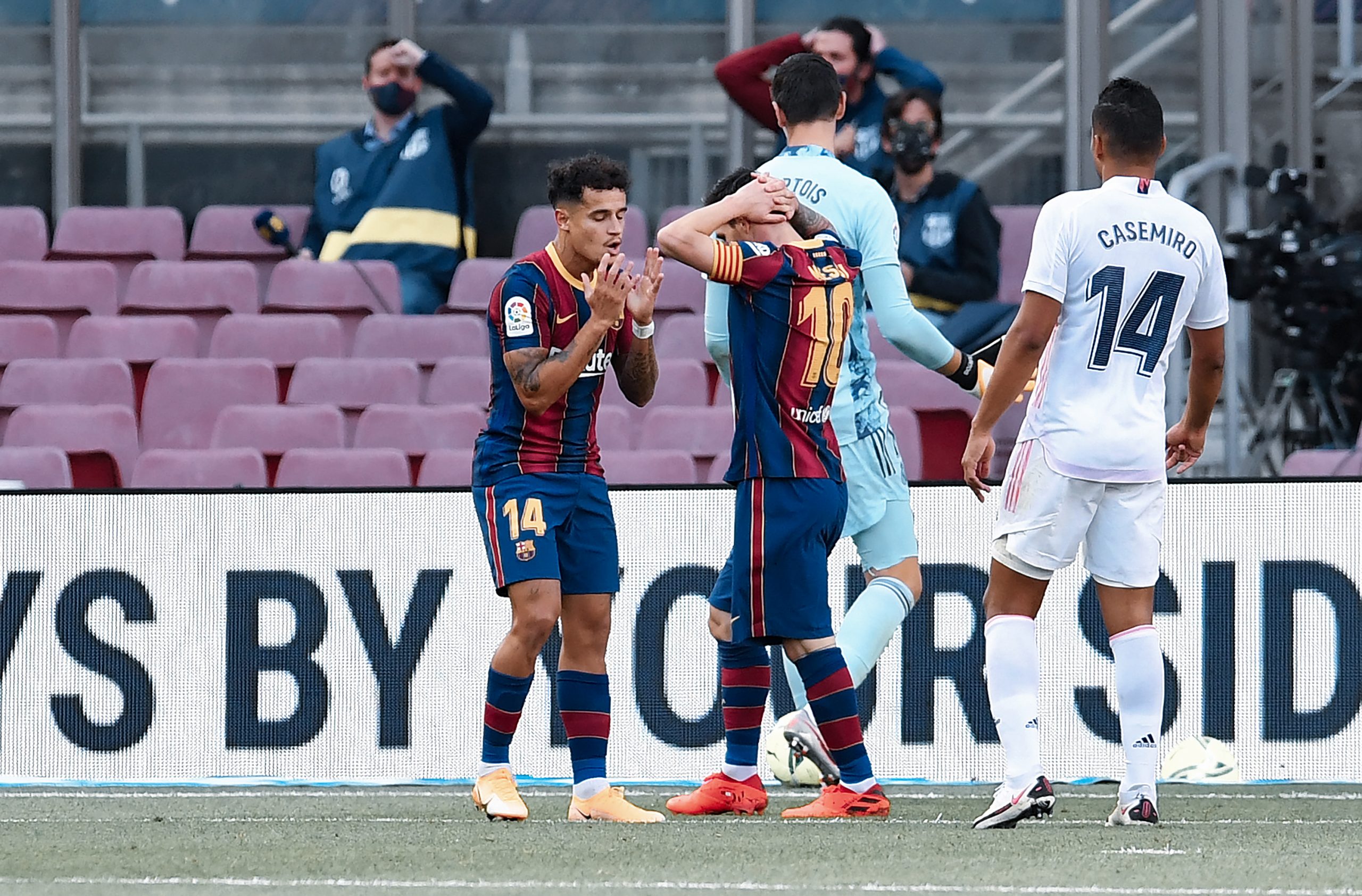 Barcelona slumped to a disappointing 3-1 loss against Real Madrid at the Camp Nou. After a promising first-half, the Catalans crumbled in the second period. One of the issues was the lack of width as the hosts failed to create anything from wider areas of the pitch.

As the line-up was announced, Culés were excited to see three teenagers start in El Clásico. Ansu Fati started as a striker, Pedri on the right-wing and Sergiño Dest at right-back. Fati led the attacks well and pressed the Real Madrid backline relentlessly. He was rewarded with a goal and was one of the livelier players for the Blaugrana.

Sergiño Dest, too, had an impressive display and showed he has the talent and mentality to succeed at the club. However, after several steady games for Barcelona, Pedri and Philippe Coutinho looked uncomfortable playing as wingers on the right and left respectively. The latter had his least effective game since the season started.

What El Clasico taught us

Ronald Koeman went into the game without a clear plan, reshuffling a system that was working for Barcelona for the most part. Barça were limited going forward because of the lack of creativity coming from the wide areas. On the wings, it was only the full-backs that offered anything going forward. Both Jordi Alba and Dest deserve recognition for their excellent performances against Madrid. Coutinho and Pedri struggled to produce much in areas that do not play to their strengths.

“The plan was to be in control, to have Ansu as a reference for his pace, and in that aspect I think we played a good game.”

Koeman has still not found the right balance on the wings since taking over. Antoine Griezmann and Sergi Roberto have offered little on the right when played together. Ansu and Alba have performed well on the left, but the manager changed this partnership on Saturday.

The team lacked proper width and Los Blancos were able to close out space in the middle of the pitch too easily, thanks to Federico Valverde’s mobility, Casemiro’s strength and Toni Kroos’ intelligence. Madrid played with natural wingers in Vinícius Júnior and Marco Asensio. Though they were kept relatively quiet in the final third, they allowed Madrid to stretch the game and create spaces, a tactic that always works against Barcelona centre-backs. Their defenders always had a passing option available to the wide areas which helped transition defence into attack quickly.

Barcelona do not learn

Almost three years after Philippe Coutinho was signed for a club record fee, he is still being played out of position. Coutinho started the season as one of Barça’s best players after Ronald Koeman moved him to the centre of the pitch. He looked in better shape mentally and physically form his time in Bayern Munich and was more involved in the games and linked well with others around him. He dictated play and took some of the creative burden from Lionel Messi.

On Saturday, however, Ronald Koeman decided to change this and play Coutinho and Pedri as the wingers as Barcelona hosted the El Clasico. It is a position that has been proven not to suit the playmaker. In the 2018/19 season, his confidence was shattered after being fielded there game after game by Ernesto Valverde.

Glimpses of 2018/19 Coutinho were seen on Saturday. (Photo by Clive Rose/Getty Images)

Another of Barça’s expensive signings, Antoine Griezmann, is currently suffering the same fate that Coutinho did two seasons ago. The Frenchman’s confidence is at an all-time low from being played on the wing instead of centrally. His performances have dropped, and his form is worrying.

Unsurprisingly, Pedri looks like the latest victim in the long line of central players playing as wingers at Barcelona. His best position is clearly through the middle as he possesses all the attributes to succeed there. However, for some reason, the manager chose to start him on the right.

Although Ansu Fati had a great game as the striker for the Garnet and the Blue, he should return to the left-wing. This frees up a central position and also keeps Fati in his natural position.

As for Philippe Coutinho, if is selected to play, it should be as the attacking midfielder, where he performs best. In addition, Antoine Griezmann should play in a central area. He would be best suited as the false nine or in behind the striker. Lastly, Pedri must return to the middle too and can serve as the deputy for Coutinho.

Barcelona have two gems within their ranks but need to be managed carefully. (Photo by LLUIS GENE / AFP)

Barcelona are not short of wingers within their ranks. Fati, Francisco Trincão, Ousmane Dembélé, and Messi can all play out wide. Konrad de la Fuente is also a back-up option in this area. These players are all more suited to the role and have the skill set to excel in this area.

“When we were losing, we first tried to create goal opportunities with those on the pitch. Then, with the changes, we looked for more presence and speed on the wings and playing 1×1 behind, it’s risky but it doesn’t matter if you lose 1-2 or 1-3.”

Fati has been one of the standouts of the season and adds a lot of pace to the team and a goal-scoring touch. Trincão has impressed in his cameos and has great dribbling and vision. If Barcelona can get Dembélé back to his best, he would be a real asset to the team and can decide matches on his own. This will only come with regular game time as he tries to recover his form after a long injury.