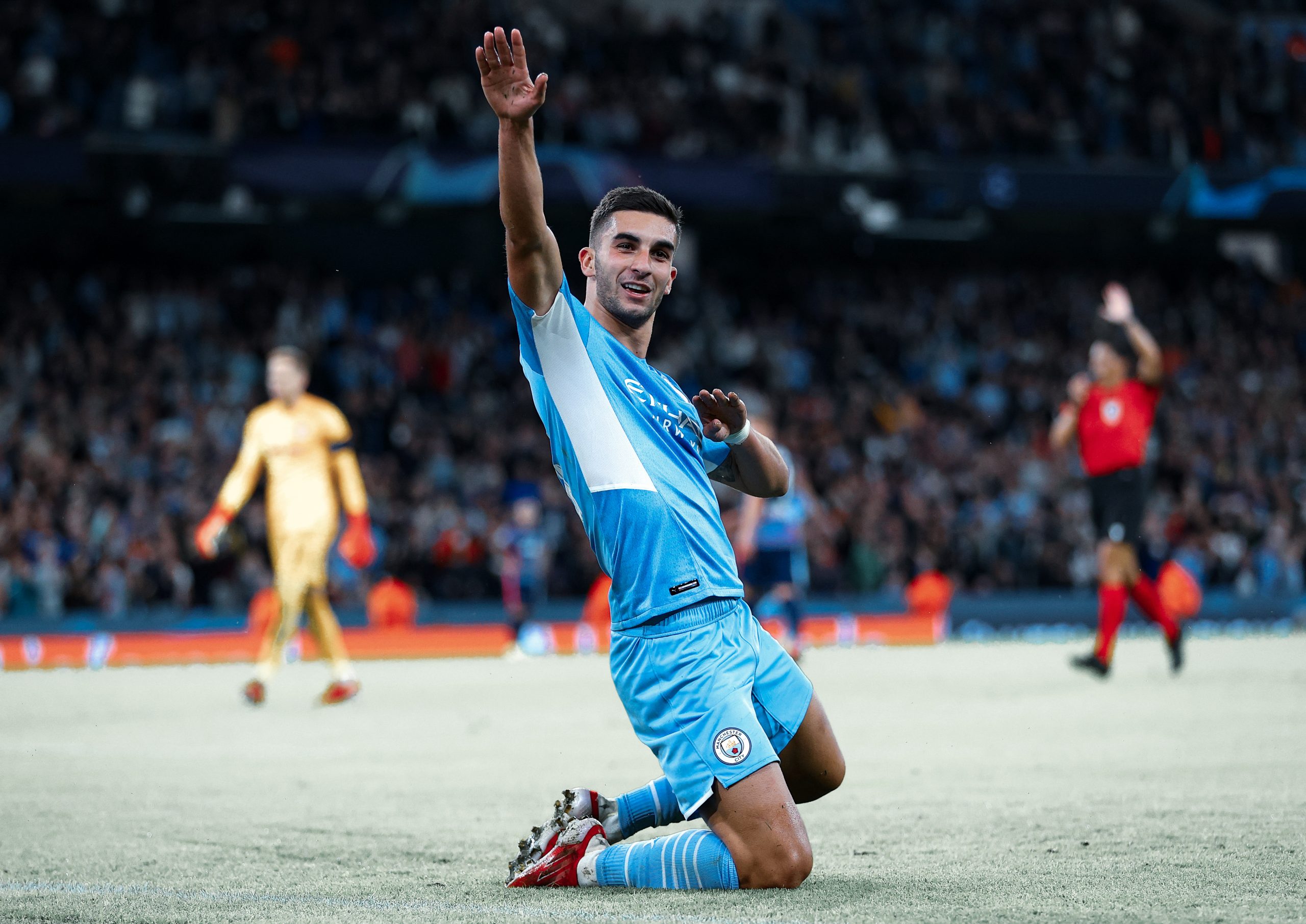 In sports, as in life, you seldom get second chances. Things pass you by, and by the time you realize you missed it, they’re gone. The temptation to turn back time is irresistible. These are the what-if stories we love to tell ourselves, even though they are agonizing to do so.

Over the last 72-hour news cycle, rumblings about Barcelona pursuing a certain Manchester City winger have permeated the footballing world. No, that winger is not Raheem Sterling, rather Spanish international Ferran Torres.

The 21-year old is reportedly eager for a change of scenery after considering Barcelona’s new sporting project, and the interest is mutual.

In a rare second chance, this is time for Barcelona to right their wrongs. It is a chance to get a player they should have gotten years ago.

Barcelona need Ferran Torres. This is why.

A wonderkid from Valencia

Born and raised in a small suburb of Valencia, Ferran Torres García is one of football’s brightest young stars. The Spaniard entered Valencia CF’s fabled youth academy at six years old and would spend the next fifteen years of his life climbing its ranks. Brimming with talent, Torres made his senior debut (with the B-team) at 16 years old and scored his first senior goal at 17.

He would make his first-team debut in November of 2017. Interestingly, as he made his La Liga debut in December of the same year, he became the first player born in the 2000s to do so. He also holds the record as the youngest Valencia player to play 50 league games.

Abreast to his developing club career, Torres made frequent appearances for various youth Spanish National teams. He notably won the 2017 Under-17 and 2019 Under-19 Euro Championships.

Naturally, Torres caught the attention of some of the world’s biggest clubs – including Barcelona. In 2020, Manchester City signed him for a bargain €20 million. Taking into account his potential and current abilities, the Citizens underpaid. He has scored 16 goals in 43 appearances.

Furthermore, he is a key player in Luis Enrique’s Spanish side, having tallied an impressive 12 goals in 22 appearances, including two in this summer’s Euro 2020.

With Torres’ background in mind, let’s take a look at how he plays, including his strengths, weaknesses, and tendencies.

Torres can play as a winger on either side, or number 9, although he grew up mostly playing out wide. He is right-footed but adept at using his left as well, meaning he can be deployed as a classic or inverted winger.

His versatility is one of his standout attributes and is undoubtedly part of why Barcelona are targetting him. In fact, across his 43 appearances with Manchester City, 18 of them have come as a centre-forward, with the rest divided amongst left and right-wing. With La Roja, he was most recently featured as a striker against Italy in the Nations League semi-final, where he scored a brace.

Torres’ standout strengths are his dribbling, positioning, finishing, and physical attributes such as speed and height (184 cm; 6 feet).

Speaking of versatility, he is a technically gifted player that can thrive in a variety of tactical setups. His close control and movement help him excel in possession-based football, while his speed and directness make him lethal from counterattacks and vertical play.

For evidence of this adaptability, one just has to watch him play under Pep Guardiola and Luis Enrique. Both managers instil distinct yet fairly similar enough philosophies that prove that Torres can not be contained to a single style of play.

When playing on the left, Torres will operate as an inverted winger, cutting inside on his preferred right foot and going for goal. When on the right, he will take opponents down the flanks (like a classic winger – think Leroy Sané) and look to score across the goal or send crosses into the box. This makes him a well-balanced finisher, someone who can score from a variety of situations and angles.

When playing in the middle, he expertly manoeuvres in the box to get into prime goalscoring positions. Still, mere positioning and being in the right place at the right time is not enough to be a “good finisher”.

What Torres has is unpredictability, confidence, and the X-factor that can propel a player to the highest peaks. His goals range from acrobatic one-touch volleys to cool, subtle finesse shots. You can carry enough weights to get stronger, you can run enough sprints to get faster, but you can’t always learn to be a good finisher.

The Spanish international’s abilities in front of goal are so natural that many envision his long-term future as a number 9. Take Pep Guardiola, for example, who stated the following in August, “[Ferran Torres] makes movements like the best strikers moving behind, like Jamie Vardy.” Furthermore, reports revealed that Torres had worked closely with Sergio Agüero to learn the ins and outs of the position.

Looking at the heat-maps below, one can see Torres’ versatility, as well as Guardiola shifting him to more central positions in recent memory.

Admittedly, Torres needs to work on his hold-up play and involvement in the buildup. Over the last two years, his xG buildup per 90 minutes (0.23), according to Understat, ranks lowest out of Manchester City’s seven attacking options.

If anything, he is closer to an archetypal number 9 than a false 9, but that isn’t really the worst thing at all. He is still currently outperforming his xG in a Manchester City uniform by almost three goals.

Additionally, he is only 21 and plays in one of the most creative teams in the world, not to mention he already has the most challenging part of the position (finishing) under wraps.

Although he only has a few seasons under the spotlight, Torres already has some standout performances worth checking out. Most recently, his showcase against Italy in the Nations League Semi-finals showed why he can be a future star striker.

He scored a brace in the first half and earned Player of the Match. The first goal was a volley inside the box, the second was a header across the goal.

Elsewhere, he put the world on notice when he scored a hattrick last September as Spain beat Germany 6-0. With these two performances, Torres showed an ability to score multiple goals against some of the best goalkeepers in the world: Gianluigi Donnarumma and Manuel Neuer, respectively.

Last May, he was on the end of another hattrick, which included a Goal of the Season backheel flick against Newcastle in the Premier League, making him the youngest player to score a hattrick in a Guardiola team since Lionel Messi.

Where would he fit in at Barça?

Now that Torres’ scouting report is complete, how might he fit in at Barcelona? To start, his versatility means he would have plenty of playing time, especially if the club’s injury crisis persists.

As a manager, Xavi Hernandez is driven to expand the pitch as wide as possible, thus Torres’ pace and dribbling on the flanks could prove more than beneficial. With his penchant for cutting into the box from either side, there would also be a host of fluidity and space for overlapping full-backs such as Jordi Alba and Sergiño Dest.

That said, he may be most effective in the box, or at least being instructed to play in the half and central spaces rather than out wide. The most appealing thing about Torres at Barcelona is that his finishing would be in high demand.

Xavi’s new-look Barcelona may not (yet) create as many chances per game as Pep’s Manchester City or Luis Enrique’s Spain, but Torres can score from very little, and he will find himself on the end of plenty of crosses, through balls, and passes into the box.

If in the starting eleven, some possible frontline combinations include Ansu Fati on the left, Memphis Depay in the middle, and Torres on the right. Alternatively, should Memphis’ form continue to stagnant, Ferran could start up front with Dembele and Fati on either side of him.

Having four quality starters to fill in the three forward positions would promote healthy competition. That isn’t even counting the abundance of promising youngsters like Ez Abde, Ilias Akhomach, and Yusuf Demir.

Regardless of the combination, his profile complements that of Fati, Dembele, and Memphis. Furthermore, Sergio Busquets would love to have another option to send long balls to, and the full-backs another target for crosses, high or low.

Ferran Torres would come to Barcelona as an up-and-coming goalscorer, he has relatively plenty of experience despite being only 21-years old, he fits the club’s long-term plans, and he is a perfect fit for Xavi’s style of play.

He may be more expensive than other targets such as Karim Adeyemi or Arthur Cabral, but he is more proven and reliable, and if reports are true, his arrival would not impact theirs. Most importantly, Torres would bring a much-needed added dimension to Barcelona’s frontline, one that can help instil fear in opponents once again.

If there was a match made in heaven, this would be it.