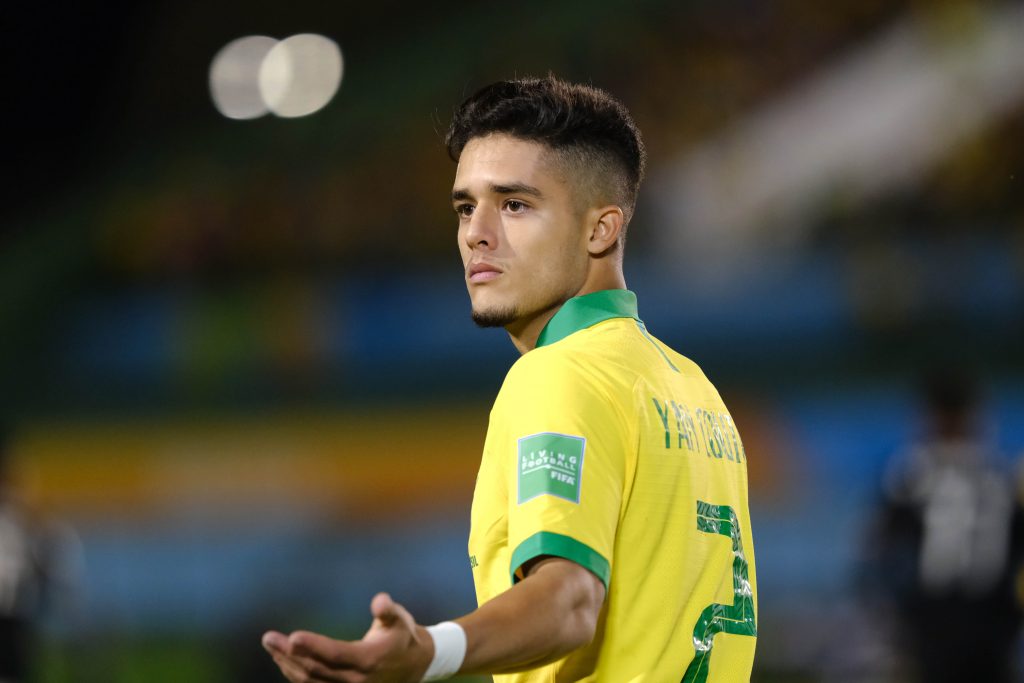 Photo by Adalberto Marques via Imago

During the winter market, the young Brazilian right-back Yan Couto was very close to signing for Barça. In the end, though, it was Manchester City who recruited him. An exciting prospect with unique characteristics and that could have fit perfectly in the system. Why did Barcelona make a mistake in letting Yan go?

The bad management in the winter market from the Barcelona’s board was a disaster. Numerous prospects were sold and others were sent on loan without singing any replacement, except for a couple of players who will join in the summer. Among the players that Barça had been following, there was a young kid of just 17 years of age: Yan Couto. A Brazilian product from Coritibia with similar characteristics to Dani Alves, he would have been precisely tasked with filling the gap left by the former Camp Nou legend. Barça knew the quality and potential that Couto had, in addition to being able to sign him for only 5 million euros. A bargain.

After several weeks of negotiation, Couto already had everything sorted out to be announced as a new azulgrana. Only the official announcement was missing. But what happened in the end? Some outlets claim that the Citizens proposed him almost double the salary or perhaps it was the figure of 5 million pounds plus 6 million in variables which City offered, a more attractive fee for Coritiba. We don’t know. What we do know is that Manchester City ended up winning the race against Barcelona to sign the so-called next Dani Alves, who will officially play with the English team in the summer and will be with them for 5 seasons. A big mistake from the Catalan board, considering what this player means and what he can become.

In 2019, Yan Couto was one of three Brazilians to feature on a list entitled ‘Next Generation 2019: 60 of the best young talents in world football‘ by The Guardian

Who is Yan Couto?

For those who don’t know him yet, Yan Couto is a product of the Coritiba youth academy. A 17-year-old right-back that attracted attention in the 2019 FIFA U–17 World Cup, he was one of the most important players of the Brazilian national team which won the international title. Couto managed to assist the winner in that final in a dramatic ending against México to win the title for his nation. It didn’t take long to draw the attention from the big clubs and, of course, the most powerful newspapers worldwide. In 2019, he was one of three Brazilians to feature on a list entitled ‘Next Generation 2019: 60 of the best young talents in world football’ by The Guardian. Something meritorious despite his young age.

Among his attributes, Yan Couto stands out for being an attack-minded player looking to push forward on every single opportunity. With great pace and overlapping runs in advanced positions, he can be described as an all-rounder. His agility is also a key asset that deserves to be discussed. This allows him to have good coordination in his positioning and to increase his acceleration. As if it were a machine. In addition, he has the brilliant initiative to cut back and cross the ball a lot, something which would be of great help in the Barcelona attack.

Yan usually plays in a 4–3–3 but is capable of acting as a wing-back in a 3–5–2 and even as a winger if needed. His versatility makes him even more interesting and clearly more usable. Although he is an excellent attacker, he also contributes in defence. The teenager has a mentality that allows him to read well the game of the rivals, apart from being supported by his speed. Couto is an expert at recovering balls by intercepting passes. Furthermore, he always is very focused on the movements of his opponents, as well as knowing how to reorganise himself and recover his position once the team loses the ball. Couto would have been everything Barça needs.

The Brazilian, more than weaknesses, has a lot of room for improvement, which is understandable for such a tender age. But there is something that could be considered as a weakness and should be corrected as soon as possible. In defence, Couto often commits very dangerous actions. He usually exceeds his level of aggressiveness, which makes him vulnerable and prone to making a foul in a risky area. This leads to him often picking either a yellow card or even a red card. Offensively it is obvious that he has the talent and great potential to be a superstar, but it’s in the other end where he must measure his aggression in order to become a more reliable footballer.

Is he really is the next Dani Alves?

Many say that he is the next Dani Alves, which, from my point of view, is understandable. With very similar physical characteristics and technical skills, when seeing Couto play it gives you the impression that you are seeing a young Alves. But to what extent will Couto become the next Dani Alves? Is he as good as they say?

At the moment, he’s just 17 years old and has already shown that his talent and potential are not an exaggeration. It is clear that this young boy has something unique which, over the years, will become a valuable weapon for any side he is part of. For sure it is difficult to overcome or even match the career that Dani Alves had. It all depends on the player’s attitude and the tactical work in which he is involved. He could become a Brazilian legend or a player that no one remembers. That said, there are reasons to be excited. He will be working with Pep and his technical features will help him succeed. He is on the right track.

“When I was a child, I dreamed of debuting in the professional team of Coritiba, but it was very difficult for me, I didn’t know if I could do it. Then, I grew and evolved, I saw that I could go further. But I never dreamed of playing in Europe”
–– Yan Couto

To understand the magnitude of how special this youngster is, it is necessary to point out that Guardiola himself called the player before being officially announced. The former Barcelona coach spoke with Yan personally – something he does not always do in the first team – in December, and also one month later when Couto returned for the medical tests. If Pep did this with his recent acquisition for City, it is because he recognises how valuable this footballer is and he didn’t consider the option of losing him.

What does this mean for Barça?

A shame that Barça couldn’t close the operation o Couto. In a few years time, they will most likely regret not having achieved one of the best full-backs for only 5 million euros. On the football side, it would have been a great addition to the team, but, realistically, there are more doubts. Couto was going to compete for the position with Semedo, Sergi Roberto, Wagué (on loan), Emerson (on loan) and Dani Morer (Barça B). Although not all of them have world-class potential, judging by the squad management from the directives in recent years it is questionable that they would have done the right thing with the young Yan. This is Barcelona today, which makes all players with the ability to have a place at the Camp Nou decide to go in search of more attractive opportunities.

At present, the player has made this big leap in his career at just 17 years of age. It is difficult to reach the old continent playing in the other part of the world, but Couto has already managed to attract the attention of the European giants, including Barça. The Brazilian will join Manchester City in the summer this year, and it is safe to say that he will have a quick adaptation and will do a great job with Pep. Now culés could feel the pain of seeing Yan Couto succeed in colours that are not the blaugranas. Will the board regret it one more time?

Dembélé staying at Barcelona for another season: good news?
What did you think of this article?