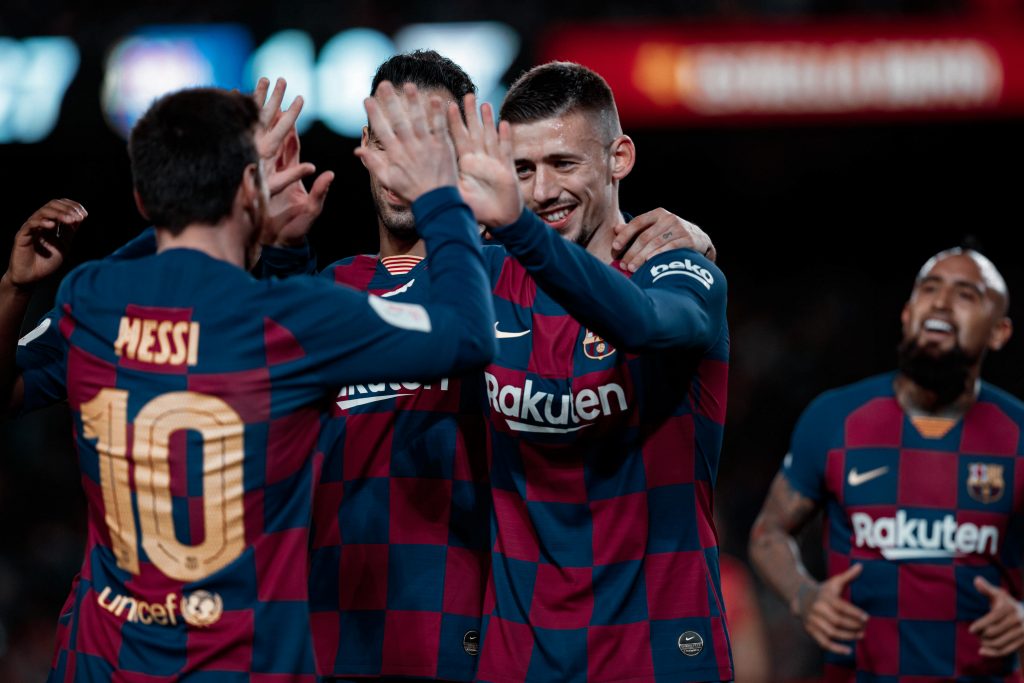 This season, FC Barcelona players have been far from their best and the squad looks very inconsistent and unreliable. In this mess, however, which footballers have been carrying the teams’s load?

FC Barcelona have endured one of the worst seasons in their recent history. Controversies have been circling around the club and the blaugranas risk ending the season without any trophies to their name. But a few players have continued to earn praise from fans. Their performances have kept culés hopeful and deserve to be applauded. So here are our picks for the top five Barça players for the 2019/20 campaign.

Note: they have not been ranked in any particular order.
Stats by Opta via Onefootball

We start off at the back with Barcelona’s brick wall. Marc-André ter Stegen has time and again proved why he is one of the best goalkeepers in the world. Be it his distribution, awareness, reflexes, calmness of mind or his technique, the German international fits perfectly into the team. Always ready to receive passes, he deals with any amount of pressing from the opposition with ease. His decision making has been absolutely perfect and often covers for any defensive mistakes that have been made.

While this may not have been Ter Stegen’s best season, he has still saved Barça many points | Photo by Alejandro Garca via Imago

He might be conceding more goals than other keepers like Atlético de Madrid’s Jan Oblak, Liverpool’s Alisson Becker or Real Madrid’s Thibaut Courtois, but this hides the fact that Ter Stegen has had an equally good or even better season than all of the other keepers. He has better distribution and passing accuracy than any of the others with no goalkeeper coming close to matching Barça’s number 1. Only Oblak has made more saves than Ter Stgen having played two games more in the league.

Ter Stegen has come to Barcelona’s rescue enumerable times and it is frightening to think where the club would be without him.

Gerard Piqué has constantly been one of the most underrated centre-backs in the world. Despite starting the season in a rather poor manner, Piqué has more than made up for the slip ups. Since the lockdown ended, he has been spectacular. Despite being 33 years old, the Spaniard continues to improve his game. He has led the back line and has set an example for young defenders. The fact that Barcelona have conceded more goals than most top teams is a result of the sloppiness of the team in general rather than the backline.

Gerard has lost some of the pace he used to have, but is able to match pacey forwards using his experience and positioning. Even when his partners have been caught out of position, Piqué is there attempting to cover for their absence. Statistically, he has better distribution and accuracy than almost any other centre-back. He makes more clearances and blocks more shots than both Real Madrid’s Sergio Ramos and Raphaël Varane. His prowess in the air is also better than other defenders like Napoli’s Kalidou Koulibaly and Juventus’ Matthijs de Ligt and he makes more successful tackles than most defenders with a 71.88% accuracy.

Piqué’s defensive quality is undeniable and is, perhaps, only bettered by a select group of players such as Liverpool’s Virgil van Dijk.

Gerard Piqué’s partner at the back, Clément Lenglet, is also a player who deserves a lot of credit. He has proved to be a crucial part of the blaugranas‘ defence since arriving from Sevilla in 2018. His absence is felt dearly, and without a sufficiently good partner to Piqué, Barcelona tend to falter. His game too has grown a lot since his arrival and he has consistently come to the team’s aid. Especially recently, he has been a rock at the back. Always making the right tackles and passes, Lenglet has hardly stepped a foot out of line.

Any fan watching games can see just how crucial he has been. Lenglet attempted more tackles than Piqué and still managed to keep a similar successful tackles percentage. He is good in the air and can make important blocks and tackles. But perhaps it is his positioning and passing that make him a key part of the Barcelona system. With a passing accuracy of 92%, he is right up there alongside Piqué as one of the most efficient and confident defenders on the ball. This season has been stellar for Lenglet and he has been one of the best performers in the side.

Sergio Busquets has always been a player to watch throughout his career, But under Ernesto Valverde, he endured a bit of dip in form. However, he has slowly regained his form this season. After Quique Setién took charge, Busquets has been playing better and better. Busi has never been a player defined by stats, but nevertheless his statistics have seen an increase this season. He has excelled in his position again and he often leaves an observer awe-struck.

Sergio does the simple things beautifully and controls the game as a pivot. Not only does he help in defense by cutting passing lanes and making tackles, but he also helps in ball progression. His passing is immaculate and he almost never misplaces a pass with a passing accuracy of 90%. He takes 106.02 touches per 90 and attempts 92.92 passes per 90.

These further highlight how central he is to the team. He has been taking on more players as well. His awareness is astounding and the way he turns away from the challenge of a player just leaves you smiling. The midfield for Barça is slowly deteriorating, but Busquets continues to excel the way he used to. He continues to be one of the best in the team.

Of course he was going to feature in this list. The best player in the world continues to dance his way through defences and carry Barcelona on his shoulders. Lionel Messi missed the the start of the season through injury, but he still managed to win the race for the Pichichi. Not only has he been scoring goals, but he has also been assisting goals as well.

Messi has shifted to a deeper role under Quique Setién and is now the primary creator for the team. He had been relentlessly working to help Barcelona stay in the title race. He has scored fewer goals since the restart, but that can be attributed to his deeper role and lack of rest. Messi’s contribution this season as well is ridiculous and the brilliance of his mind is dumbfounding. He might be growing old, but Leo is continually operating at the highest level and is, unquestionably, the best player in the team right now.