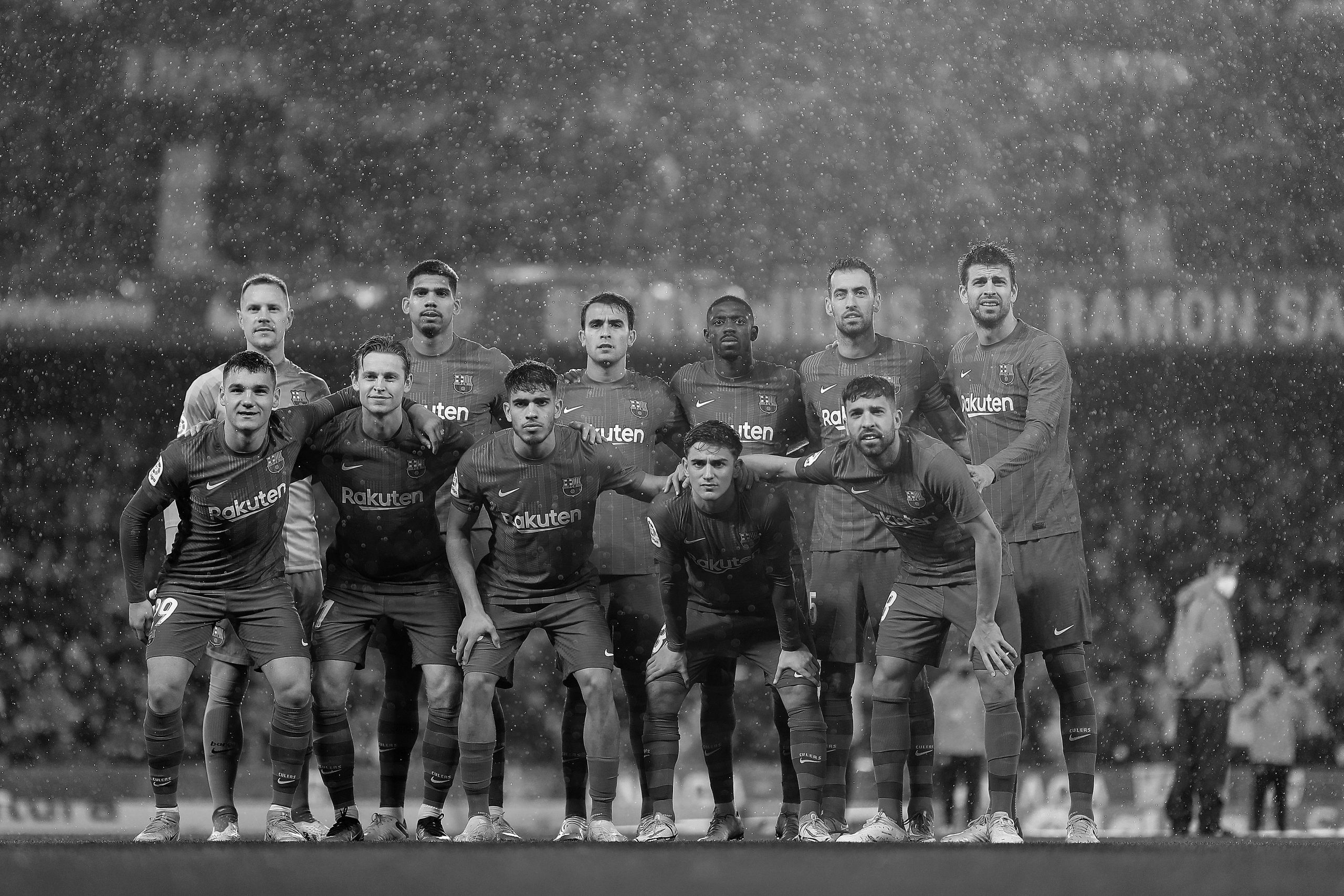 Some argue that “everyone has their price”. In sports, that means no matter how promising or valuable a player is, the right price means their departure.

On the other hand, money can only buy so much, and some players are deservedly “untouchable”. For the longest time, Barcelona’s core was defined by such indispensable players.

Not even a €1 billion could pry the likes of Lionel Messi, Xavi, and Andres Iniesta away from the Camp Nou. Now, as the club find themselves at seemingly new lows every week, they are forced to reassess who is untouchable, and who they can afford to let go.

In the following article, Barça Universal will look at the Blaugrana squad and determine which players are untouchable, at replacement level, and other classifications.

To start, let’s look at the “Untouchables”, the group of players Barcelona must keep with all their might, no matter the transfer offers. This group, comprised primarily of youngsters, is also seen as Barcelona’s future core.

Filling out key positions, these players can – and should – define the Catalans for years to come. In no particular order, players include Ansu Fati, Pedri, Gavi, Frenkie de Jong, Nico Gonzalez, Ronald Araujo, and Eric Garcia.

Fati, Barcelona’s long-term number 10 – and potentially number 9 on the pitch – needs no further justification for this status. At only 19 years old, he already has the composure and ability to finish in front of goal like a veteran, not to mention the confidence to spearhead Barcelona’s front line.

2021’s Golden Boy Pedri has been sidelined with an injury for the last month or so, but his importance to this Barça side can not be understated, even with the arrival of Gavi. Speaking of Gavi, the Catalans, without a doubt, have two of the most promising young midfielders in the world.

Frenkie de Jong has been in the midst of a rough patch lately, and he has failed to make his mark at the club for three seasons. Nico Gonzalez’s rise to stardom has also questioned the Dutchman’s long-term status, but ideally, both dynamic interiors can thrive simultaneously. One can only imagine how (and if) Xavi will field Pedri, Gavi, Nico, and de Jong. Fortunately, their profiles are distinct enough to compliment one anothers’.

Ronald Araujo’s inclusion also goes without saying, as the young Uruguayan has been Barcelona’s most reliable defender in plenty of matches. He is also future captain material with his combination of fortitude and vigour.

Eric Garcia’s addition may surprise most, however his potential alone is enough to merit his place as an “untouchable”. Still, if Barcelona were to sign a player of the calibre of Matthijs de Ligt or Jules Kounde, they could reasonably survive without Garcia.

As a sign of the times, it’s fitting that Barcelona’s most invaluable players are also some of their youngest.

With a set idea of untouchables, let’s now define the group of players who are no longer indispensable, despite serving useful and critical squad roles in the meantime. Years ago, these players would have never left Barcelona. Now, circumstances are different. Names include Sergio Busquets, Gerard Pique, Jordi Alba, Sergi Roberto, Marc-Andre ter Stegen.

Busquets remains one of Barcelona’s most important players, but at 33 years old, he is no longer untouchable. The same applies to Gerard Pique (34) and Jordi Alba (32), despite their relevance.

Only two seasons ago, ter Stegen was one of Barça’s most crucial players, arguably second to Lionel Messi. His fall from grace has been a leading story thus far in 2021/22, and he is no longer the rock the Blaugrana’s shaky defence can count on to bail them out. Additionally, he is still a big-name player and could attract a fairly large transfer fee.

Roberto’s contract ends in June 2022, and it seems his stay in the Catalan capital is now over. Given his underwhelming performances and injury-prone present, it is probably for the best, though.

If all of these players were to leave tomorrow, Barcelona would plummet down the La Liga table, however, with the more significant long-term picture in mind, they are not untouchable. The question is, can Barcelona get them proper replacements?

The next group of players are those at replacement level. They are helpful squad options who provide depth but can be easily replaced with others in the transfer market or La Masia. This group is the largest in this article, consisting of the majority of Barcelona’s squad.

Backup goalkeeper Neto finds himself in a difficult situation. On the one hand, he is far too skilled to be a backup goalkeeper. On the other hand, Barcelona need a reliable number 2 to ter Stegen. In all, Neto could be replaced with Arnau Tenas or Iñaki Pena, both from Barcelona’s youth system, albeit they have not made a single first-team appearance between them.

In defence, Clement Lenglet, Oscar Mingueza, and Samuel Umtiti can all be sold without significantly impacting the team. In fact, Umtiti’s departure would benefit the team from a financial perspective, while Lenglet and Mingueza are on relatively low salaries and are sufficient backups.

In a similar situation to Umtiti is Philippe Coutinho, the Brazillian who may never live up to his €140 million price tag. While Coutinho could serve as a useful rotation piece, his high salary could prevent such an arrangement.

Elsewhere in midfield are Sergi Roberto and Riqui Puig. On their day, both can provide plenty to Barcelona, but it is nothing the club can’t find anywhere else.

A potentially controversial pick, Memphis Depay has spearheaded Barcelona’s often toothless front line with a fair amount of success. However, he is not fitting of being an untouchable, despite the fact that he can realistically be a part of Barcelona for the next few years. Depay could also garner a hefty transfer fee, something the Catalans will likely take into account next summer.

Furthermore, forwards such as Luuk de Jong and Martin Braithwaite also fall into this category.

The next – and last – group was the most difficult to determine, thus the name “the undefined”. These are players who encompass a variety of values; some need more time to prove themselves, some haven’t been given enough time, and others could cement their place in the squad if the right pieces fall into place.

Starting off this group are two youngsters — Alejandro Balde and Ez Abde. They represent players who need more time to prove themselves. Balde’s age has shown in his few first-team appearances, but not every youngster can walk into the first team like Gavi or Pedri. In his case, the left-back has a long-term future at the Camp Nou, he just hasn’t turned heads yet.

Abde has surprised culés and excelled under Xavi, however, he is not a so-called untouchable.

While Sergino Dest’s time at Barcelona has been inconsistent, his peaks and best performances have shown plenty of promise. Still, he is reportedly on the transfer list, and the Catalans are actively shopping him, a surprising turn of events given the squad’s other right-backs’ performances: Mingueza and Sergi Roberto.

Perhaps the club is considering Dest’s market value, one that is substantially more than the both Spaniards’, however, Dest should be kept instead.

Araujo has performed admirably as a right-back in Xavi’s hybrid 3-4-3/4-3-3, but his long-term future is at centre-back. Above all else, Dest deserves more patience, although his performances need to improve.

Last but certainly not least is Ousmane Dembele, arguably the most divisive player in the squad. Sorting through each category, he does not quite fit any. First, he is certainly not indispensable, and the reasons for that are clear.

If the best ability is availability, he is seldom fit, despite his impact when he plays. The arguments for him being replacement level are admirable, especially with the emergence of Ez Abde and the potential signing of Ferran Torres as an option out wide, but he has the potential to be a crucial player. As such, Dembele exists in a flux category of his own. Still, his long-term future at the club will reportedly be determined any day now.

Looking at Barcelona’s squad, the selected group of untouchables has enough potential and promise to dominate world football for the next decade. Elsewhere, the rest of the squad has a reasonably well-defined value.

Getting back to the top of world football means building around (and keeping) said indispensable gems and maximizing each of their respective potentials, not to mention acquiring the right pieces to round out the rest of the squad.