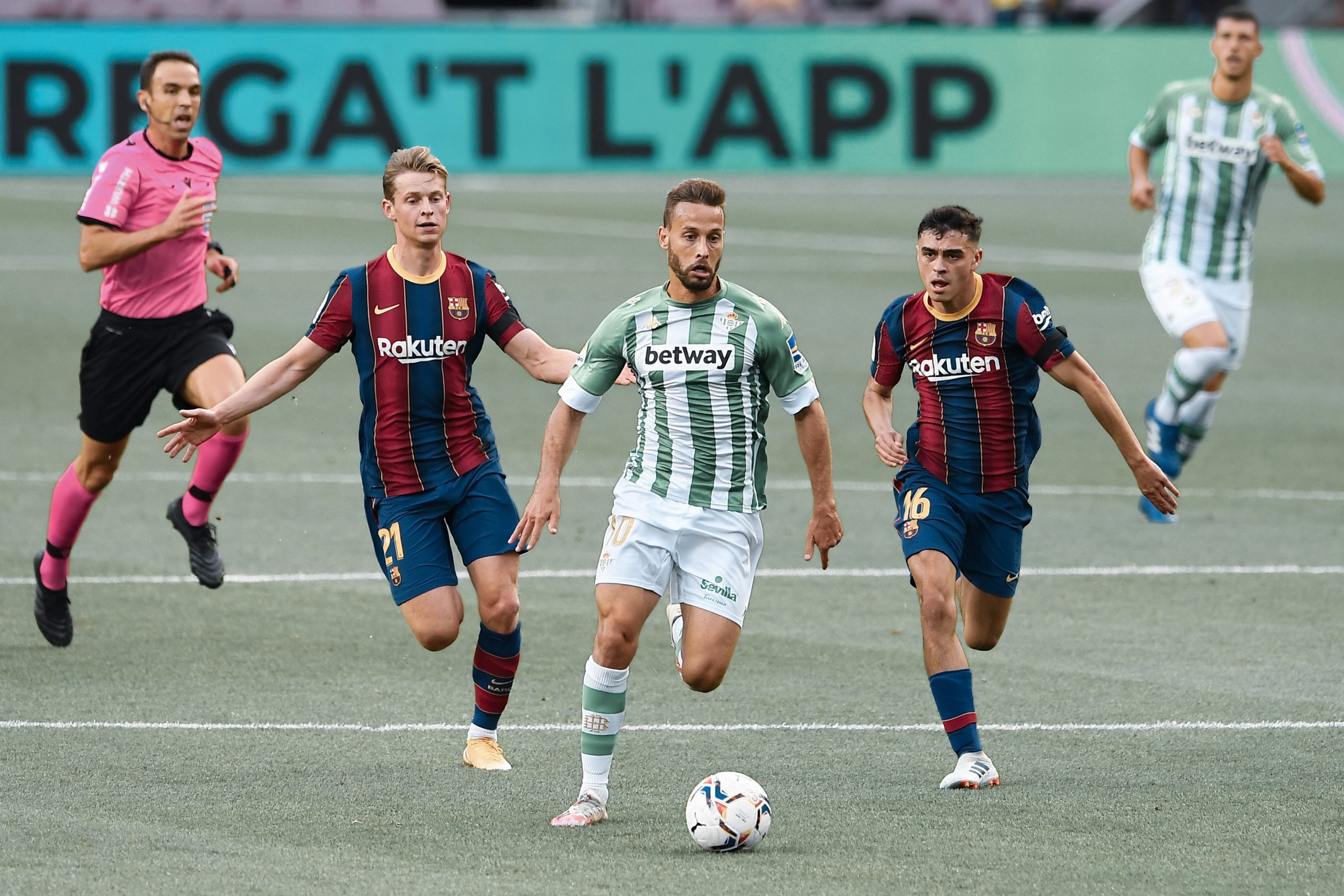 Work rate is a crucial element in a successful football side, but which Barcelona players have put in the most effort this season?

While FC Barcelona has always been renowned for their technical ability and tactical intelligence of its players, their work rate on the pitch has also played a key role in the club’s greatest triumphs.

The concept is simple, but that does not detract from its importance. Players who track back to win the ball, make bursting runs to create space and passing angles, and constantly apply pressure out of possession are incredibly valuable.

While it may be impossible to quantify a player’s effort with full accuracy truly, the available data can still reveal some prominent trends. With that in mind, which Barcelona players put in the highest amount of work rate statistically?

First things first, time to establish a methodology. Using data from FBRef, the dataset will be filtered down to outfield players who have played five or more 90’s in one of the big five European leagues in the 2020/21 season. That means each player has at least a decent sample size under their belt, so there will not be anyone with only a few ten-minute appearances off the bench.

Then, which metrics can be used to quantify effort best? With the data available, it seems like the most viable option is to try and identify box-to-box players. For that, we can use the different areas of the pitch in which players take their touches.

These averages were then scaled between 0 and 100 for the final “Offensive Coverage Rating.” This is how the top five came out for all clubs:

Elsewhere in the top 20 are names like Andrew Robertson, Reece James, Luke Ayling of the intense Leeds United system, Ander Herrera, and Frenkie de Jong. There seems to a solid set of players who work their way up and down the pitch, either down the flank as full-backs or as energetic centre-midfielders.

How does the Barça squad stack up in particular?

As previously mentioned, the full-backs are the main standouts. The never-ending stamina of Jordi Alba is especially on display. Frenkie de Jong sits as the top non-full-back by a solid distance, reflecting his ability to drop deep in the buildup and provide dangerous runs forward.

A bit lower down the list, though, things start to look a bit weirder. It should be noted that this methodology can be a bit biased towards centre-backs. They rack up many touches in the defensive penalty area, defensive third, and middle third in a possession-based system, and the additional touches they get in the attacking penalty area off of corners and free-kicks can drive their scores pretty high.

Looking at Antoine Griezmann and Martin Braithwaite all the way at the bottom brings up another limitation. While we can track players who are active in many different areas of the pitch, we can not do the same for players who move and work a lot in the same area.

Watching Braithwaite and Griezmann definitely shows how active they are making runs in behind or across the attacking third, but because they do not drop off very often to pick up the ball, they rank low in the team.

However, those top names prove this offensive coverage metric is able to quantify box-to-box play in possession. Additionally, incorporating defensive metrics will clean things up even more.

On the other side of the ball, the process is very similar. The same players and methodology will be applied, only this time with pressures instead of touches.

StatsBomb, who collect the data displayed on FBRef, define pressure as, “…applying pressure to an opposing player who is receiving, carrying, or releasing the ball.” These pressures are just broken down based on the thirds of the pitch, not the penalty areas too, so only three metrics go into each player’s “defensive average.”

Once again, those averages are then scaled between 0 and 100, creating the “Defensive Coverage Ratings.” The top five performers in these ratings were:

Midfield workhorses like Fred and Adrien Silva, along with high-pressing forwards such as Diogo Jota are common throughout the rest of the top 25.

Given that Barcelona are a possession-heavy side, and one that often presses at a lower intensity, one would expect these defensive work-rate ratings to be a bit lower. Still, though, which players stand out?

Pedri comes out as the clear leader. Impressively, the teenager’s score is one that would be respectable in any side. Let it serve as just another testament to his work rate and ability to perform a variety of different tasks on the pitch.

With Sergio Busquets in second, even as he ages, he is still one of Barça’s most active players in terms of closing down the opposition. In third is another newcomer, as Sergiño Dest’s tendency to press aggressively puts him much higher than most of the other defenders in the squad.

The tallies for the other members of the backline are quite low because they defend in a more reserved nature. This can also be attributed to the fact that Barcelona give up fewer opportunities than many teams.

With both of these two ratings in place and some solid results for top-ranking players, it is time to combine them.

Here in the endgame, we will be combining all eight metrics to create one “Overall Coverage Rating.” That means touches in each third, touches in both penalty areas, and pressures in each third are all included. This way, we can see the players who cover most of the pitch overall.

The top five is comprised of:

The numbers still involve the same intricacies as those discussed for the separate offensive and defensive ratings, but at least the top five names seem to match an eye test evaluation of the squad.

Pedri has joined the team and impressed everyone with his work rate and movement. He will track an opposition runner back to the defensive third, win the ball, combine in midfield, and then get forward to be an outlet for Messi.

While not as youthful and agile, Busquets still serves as a metronome in the possession and an active defender. He will move and reposition to rack up touches in the deeper thirds and engages in defensive duels very often.

The right flank has been slightly ignored at times this season, leaving Dest isolated, but the American always brings energy. He has all the skills and the mentality to be a great modern full-back.

Dest’s counterpart on the left, Jordi Alba, performs a much greater portion of his work offensively. His countless runs down the left wing have made him a key target for through balls and switches of play over the last few seasons.

Lastly, Frenkie de Jong backs up his reputation as an all-round midfielder. This season, the Dutchman is settling in more at the Camp Nou, and his surging runs forward to the penalty area have been awe-inspiring as of late.

Rivaldo (on De Jong): "It is being shown that near the area it seems that he is capable of playing better as an offensive midfielder and that he can even play a role similar to what Messi does when the Argentine is away. This is great news for Koeman." pic.twitter.com/r8aIrdMWSg

Griezmann and Braithwaite are probably the hardest done by these metrics. However, their energy, work rate and volume of runs they can provide off the ball is noticeable when watching them play, and invaluable for Barcelona.

There is no perfect way to quantify how hard a player works in-game, especially with these limited statistics. What this attempted to do, though, is focus on effort in terms moving to a variety of areas, being as involved in the match as possible, and doing so in different ways.

While not perfect, this methodology was successful in identifying some of the busiest players in the side. It should serve as a reminder of the value these players, like Pedri or de Jong, can offer beyond even their brilliant technical ability.

Given that 32-year-old Sergio Busquets and 31-year-old Jordi Alba were also near the top, it is a reminder of the potential replacements the club will be forced to make eventually. How long can these two continue to exert energy at this level? Could younger players be doing even more in those roles? How will Barça fill those holes when they move on? These are questions that need answering.