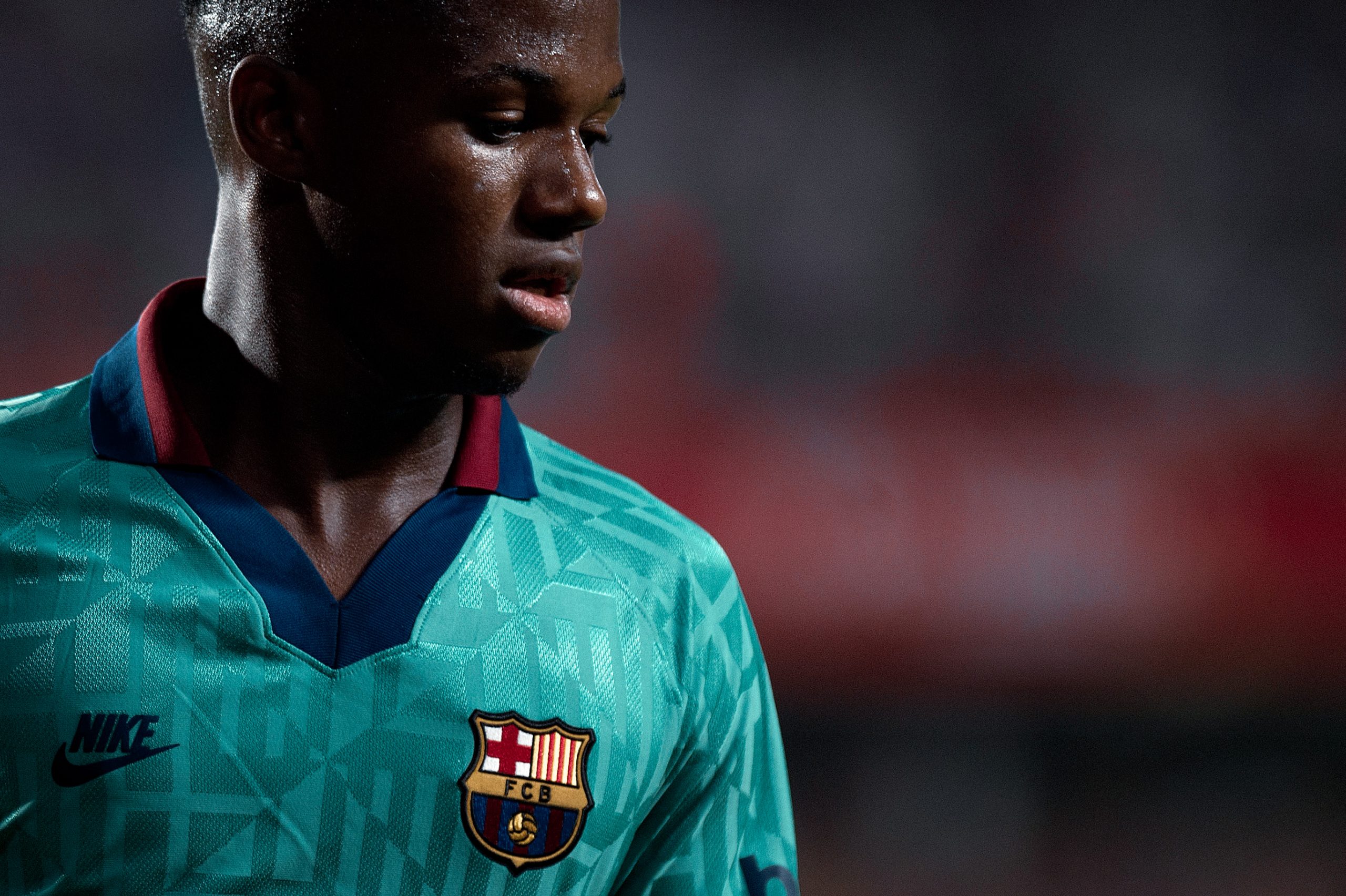 Anssumane “Ansu” Fati Vieira. A kid, a talent that has been mesmerising the world stage for a year now. A prodigy that has been making wonders since the day Ernesto Valverde decided to put a little faith in him. As the games go by, so does the youngster’s destiny as the future big thing in the worldwide stage. But considering the needs Barça have at the moment, should Ansu Fati keep flying the left wing or centralise his influence to be a number 9?

Who would have known that Ernesto Valverde would have ended up gifting Barcelona of such a diamond? Probably, nobody. But the reality has been giving Barça fans at least a hope in the last desperate times. And this hope has a name and a surname: Ansu Fati.

The young Spanish international, born in Guinea-Bissau, has recently broken yet another record, that of the youngest player to ever score with La Roja‘s senior national team. He seems to continue his year-lasting development towards football’s elite. But as the raw material in him is still very much vivid and editable, it is rational keep asking ourselves which position would better suit him.

As in even earlier stages of his academy journey, Ansu Fati has always been synonymous with class. Precocious for his age, he has always shown that kind of talent that you don’t see often. Even comparing him with La Masía’s standards. And that alone should mean something by itself.

Often used as a striker in his youth career, as a number 9, Ansu Fati was able to net lots of goals without decreasing his centre of attraction and creative way of playing. Intelligent and decisive with the ball, rational off the ball with those wider movements and inner diagonals behind the opponent’s defensive line. A pure talent.

In his first year as a professional, Ansu Fati has been breaking records and barriers at breakneck speed | Photo by Pau Barrena / AFP via Getty Images

With the 2019/2020 season opening, culés seemed more desperate than ever, seeing their captain Lionel Messi and the club’s third top goalscorer in their history, Luis Suárez, injured. Hopeless until this kid showed up. A kid who brought not only excitement to the blaugrana environment, but also fresh legs and light attitude to a very stressed dressing room. His involvement to the big boys table could not have been quicker: cross, imposing header and goal. That was his welcome to La Liga: a star was born.

But as both Valverde and Quique Setién gave him the chances to shine, Barcelona fans who do not have a clue about what he has achieved and done with the youth sides could not forecast the thought of Ansu Fati being used as a pure striker. Why would such a talented winger have to limit his influence zone by occupying a central, dense position?

During the previous season, the Spanish wonderkid has been constantly showcasing his talent under one and only one role: the left-winger one. Whatever the other offensive line-up was compromised of, Ansu Fati’s position has always been that on the circumstances he played. And that position has also been the one that made all the Barcelona fans fall in love with him.

If it already wasn’t for his skilful abilities, his technical likeness to a former Brazilian player that walked through the Camp Nou recently was evident: Neymar Júnior seemed to be back at Barça, or at least a younger, cheaper, but not less qualitative version of him. Everything should be put into context though, but his movements and feints really remembered all culés nostalgic moments.

Ansu’s involvement with the Catalan team has increasingly been more influential during the year, yet still not at the level a guy with his talent should aspire to. Now, with the spectacular performance he delivered with Spain, the whole world, let alone around the Camp Noup stands, awaits for his brilliance to be brought upon Barcelona. But with new coach Ronald Koeman having numerous choices to pick from, where will really Ansu Fati feature from?

His finishing skills have never been doubted at youth level and with time they are most likely to get turned over to the first team, but should scoring goals be his main objective? Not at all. You see, as much as scoring is a fundamental part of the game, every player in the pitch should be cohesively working towards a collective goal. It will not be an individual to score more or less goals for Barça, but the group effort. And so, Ansu Fati should focus on refining his sparkles.

In his first start with Spain against Ukraine, Ansu Fati started as a left winger and ended as the 9 | Photo by Gonzalo Arroyo Moreno via Getty Images

As shown for Spain, his main danger zone is an evolution of a series of steps into a predetermined path. Receiving the ball out wide, it is a continuous pursuit to the opponent’s defensive movements and, eventually, tackle. That is when his ability with the ball makes him deadly on the first change of direction and first touch acceleration. Finally, the proficiency from just outside the penalty box, as much as inside of it, is what makes his supporters think about an Ansu Fati closer to the box.

But Barça’s rebuilding should come with a plan. And a rebuild, as much as a long-term project, goes through a developing phase. Ansu Fati ha proven to be the perfect winger in Barça’s tactical system. And with Antoine Griezmann being promised a prominent role in Koeman’s plans, it is the right excuse to keep him down that left side, going into the pitch and mesmerising opponents.

Obviously Barça’s needs and the players’ wishes are most of the times very different things from each other, but in this case, the club has found both a gem and a need at the same time. Why waste it in searching for something that will come either way with time?

Ansu Fati will score lots of goals for Barça. There is no doubts about that. He already scored his debut goal even before the great Messi had done at his age, and we all know how well that has proved to be for the Argentinian. And just as Ansu, even Messi was a winger. You do the math.