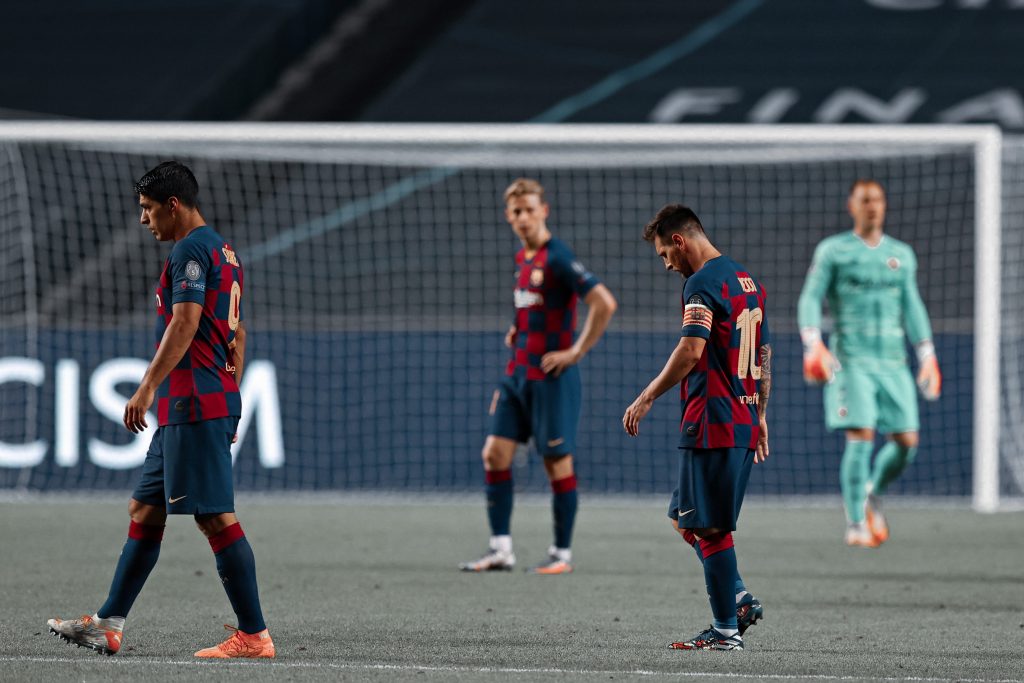 Barcelona must put their embarrassments behind them and begin to rebuild now. The whole club from top to bottom needs to be rejuvenated and shaken from this depression. The board, managerial team and the squad has to change drastically.

There is no denying that Barça are a team in crisis. Culés have been watching as their beloved club has been destroyed from within over the last decade. It has been a slow and painful process with many low points and some highs. Over 120 years of history has been tarnished by a select group of people who do not stand with the club’s ideas and values.

With a new decade just around the corner, the focus must be on starting again and building from the ground up. A new board must be brought in with the focus on youth team players and stopping the Galáctico signings. Furthermore, a manager with a blaugrana background should be chosen to lead the team. Lastly, the old guard must be completely replaced or succeeded within the next season.

Since the departure of Neymar, squad planning at the Camp Nou has been non-existent. There has been a lack of depth, players signed then played out of position and a failure to build a competitive team. La Masía has been overlooked and instead players have been signed for astronomical fees and brought very little. This has led to the heavyweights in the dressing room having too much power and being difficult to drop. The club has forgotten about its own and signed players that do not fit the system of the Spanish giants.

For next season, many of the usual starters should be sold to get their extortionate wage bills off the books. These positions should then be filled by the younger players such as Riqui Puig, Ansu Fati and Carles Aleñá. The club must go back to basics and build a young, hungry team that does not have any fear. A team that understands what it is to wear the garnet and blue colours. La Masía must be used again and given priority over big money signings. This does mean a huge overhaul of the squad and likely taking cut prices for big named players, but in the long run, it will be beneficial.

To rebuild the Barcelona squad, a big role from La Masía is non-negotiable | Photo by Panoramic / Pool / UEFA

Time must be given to this young squad to grow and establish the Barcelona brand of football once again. A new dynamic team with pace and the ability to move the ball much quicker is needed. Over the last few seasons, the Catalans have struggled to sustain a high tempo throughout full matches. Players must be rotated more so they are not burnt out during the second half of the season and a competitive edge is maintained.

The last two managers at the club, Ernesto Valverde and Quique Setién, have been questionable appointments. Though Valverde was a player at the club for two seasons, he did not have the correct style to manage Barcelona. Setién claimed to idolise Johan Cruyff, but for whatever reasons failed to implement his style. Both managers lacked that experience at a top club and did not have the personalities to control the dressing room.

When considering a new manager, Barça should try and get someone that understands the club and what it stands for. The most successful managers over the last decade have all been associated with the club and had strong characters. Pep Guardiola, Luis Enrique and Tito Vilanova all experienced success during their tenures. It is not a coincidence that they all had a strong connection with the club and were well respected by the full dressing room.

After several disappointing seasons in a row, Barcelona must rebuild itself. Strong leadership is needed to change the ageing squad that has not been performing at a high enough level. A new management team should be brave and willing to play the younger players consistently throughout the season. They also must command the respect of the dressing room and play good football to entertain the fans.

However, this will be a transitioning period and the focus should be on winning La Liga again and take the pressure off the Champions League. Culés need to see the team play the right style of football and show enthusiasm and a desire to compete.