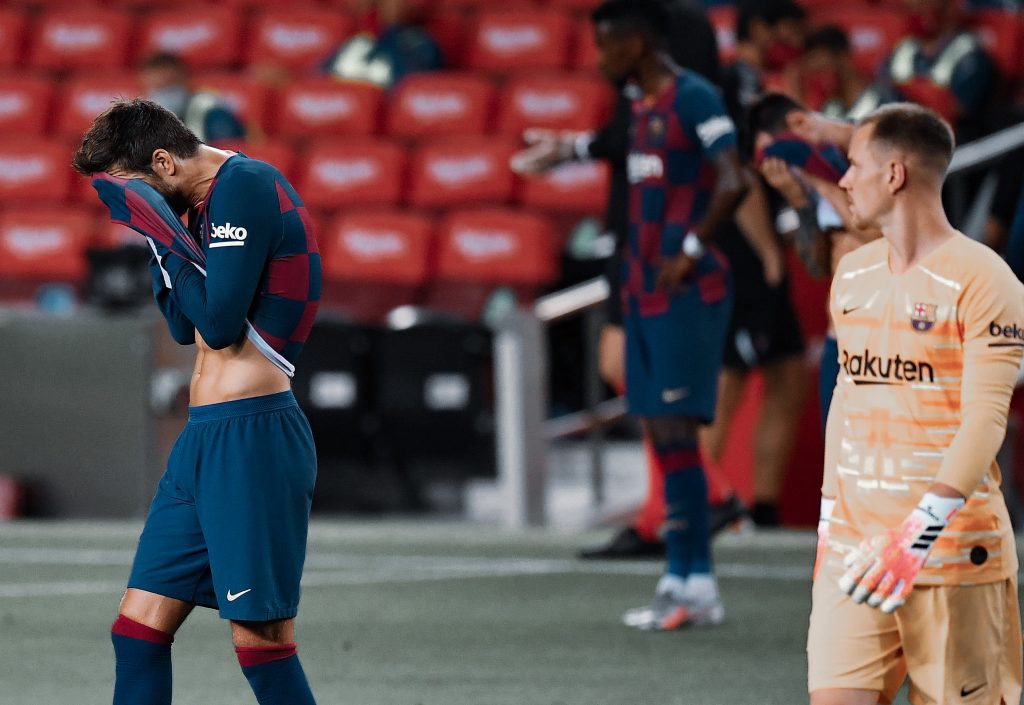 After a disastrous night at the Camp Nou, it is time to look back at how Barça lost the league title and see whose fault it is that the club is heading in the wrong direction.

How? Why? When? Did we deserve it anyway? Are we allowed to blame the refs? Should we hate ourselves for this? What should we do now?

All these questions come after a sad day, perhaps the most miserable day to be a Barça fan in a very long time. After a rollercoaster of a season, where everyone tries their best, the La Liga title goes back to Madrid after two years in Barcelona’s trophy haul. The reactions seem excessive, maybe too demanding from the fans. After all, this title has gone to Barça on eight out of the last twelve occasions, and losing once shouldn’t be too irritating.

However, seeing all these fans, all these pundits and the greatest player to ever play for this club whine after this title loss shows an underlying problem that neutrals don’t see. Barcelona lost the league title and cannot cover their decline with titles anymore and now have to self-criticise, as captain Lionel Messi said. They can’t say that there isn’t a problem that has occurred all season long, neither in the Champions League or the Copa del Rey. This title wasn’t lost at a certain point; it began chaotically.

“We were inconsistent during the season. Real Madrid did their thing. We lost a lot of points. We have to do some self-criticism. We are Barça”

First, the obvious away problems that neither Ernesto Valverde nor Quique Setién knew how to solve. This loss isn’t on a specific manager, as some social media intellectuals try to say. Rather, it is on a whole squad, which looked drained from matchday one.

Then, injuries were the most significant burden of the term. It started with Leo Messi missing about a month of the season along with Luis Suárez at the start. These two injuries, accompanied by Ousmane Dembélé’s knock against Athletic Club on the first game, meant that the frontline was deprived of its best assets. Barça had to rely on the newbie Antoine Griezmann and La Masía graduates in Ansu Fati and Carles Pérez.

The injuries followed them throughout the whole year, with Arthur Melo, Jordi Alba and even Marc-André ter Stegen all suffering injuries at some point in the campaign. Suárez’s second injury of the term and Dembélé’s third made it really problematic for Setién, who had to endure these two injuries in his first days in January.

“Since January, everything that’s been happening at the club has been weird and bad”

Injuries played a role in Barça’s title loss, but in no way, shape or form do the culés have the right to hide behind it. The performances weren’t good enough. Valverde’s side looked bereft of ideas and confidence as they lost and drew many away duels at the halfway point. Clashes against newly-promoted Osasuna and Granada, the draw at Real Sociedad’s Anoeta, the dull goalless draw in the home El Clásico, the infuriating draw at the death against Espanyol at Cornellà…All this meant that Valverde’s men were underperforming for most of the first half of the course.

The blaugranas finished on 40 points at the halfway point, tied with Real Madrid, and the cookie continued to crumble as Ernesto Valverde failed to see out the season. Quiqe Setién came and sold everyone dreams. He promised football champagne; he pledged that the good years were set to come back, his first press conferences made us fall in love with him.

“I don’t have titles or an extensive curriculum, but [what I do have is that] I love this philosophy and my teams have played football very well. And that is the only thing I can guarantee, that the team will play well”

We had gotten what we wanted as culés, good football and performance, but we had forgotten one thing: the results. Setién’s team didn’t play badly at all; they were just even more dull than their predecessors. The first encounter with Granada was sublime despite the lac of chance creation: 1,000 passes, 80% possession and one goal. The liberation of Messi’s opener and Riqui Puig’s part in it made us fall in love with Barça again.

After that, the honeymoon period was over. The 2–0 loss at Valencia’s Mestalla came when Quique was still experimenting, and culés accepted the Copa del Rey elimination to Athletic Club if it meant they would concentrate more on the league and the Champions League. Against Napoli, it was uninspiring, but Antoine Griezmann got the goal in a 1–1 draw, and maybe Setién had a plan after all.

The most hurtful moment of the campaign was the El Clásico 2–0 defeat to Real Madrid away from home. Barça played decently, not good but not as lethargic as Madrid, and perhaps deserved more with more clinical finishing from the attackers. Vinícius Júnior’s goal unlocked everything, and the lack of concentration would be a recurring theme for the Barça defence while being toothless would be the biggest problem of them all.

The coronavirus break happened, with Barça on top after Real Betis stunned Madrid at the Benito Villamarín. But everything got bleaker and bleaker after it. The players were sluggish, with just a few keeping their way above water: Messi, Riqui Puig, Sergio Busquets, Ter Stegen, Clément Lenglet, Gerard Piqué…But some of the others performed way below their and the club’s standards.

Players that have lacked consistency like Luis Suárez or Arturo Vidal seemed to shoot Barça in the foot. The games on many times went from bad to worse, with the second half against Sevilla being the epitome of a league campaign that was messed up from A to Z, no matter the manager.

The board should feel ashamed of themselves too. Not only did they plan the squad horrifically in over the past transfer windows, but they also created further turmoil in the blaugrana camp with the I3 Ventures scandal and the Arthur Melo sale. Why couldn’t they have waited until the transfer window to sell Arthur? All these rumours, all this wasted talent, for nothing.

Ever since the transfer, Arthur has played four minutes while Barcelona’s future Miralem Pjanić has been enjoying life with Juventus, so the eyebrows have to be raised at the management of this Catalan club. Not just the managers, but the higher-ups. They planned the squad poorly, they did all these shady dealings, and they should be held accountable for their actions.

“We are Barcelona and we must win every game”

Always remember, culés, that we are Barça. A bad run of form or a bad season, even a bad board, should not define this club’s identity. Keep your head up and look at what we can achieve in the future, and stop looking into the past. Barcelona will be back stronger.