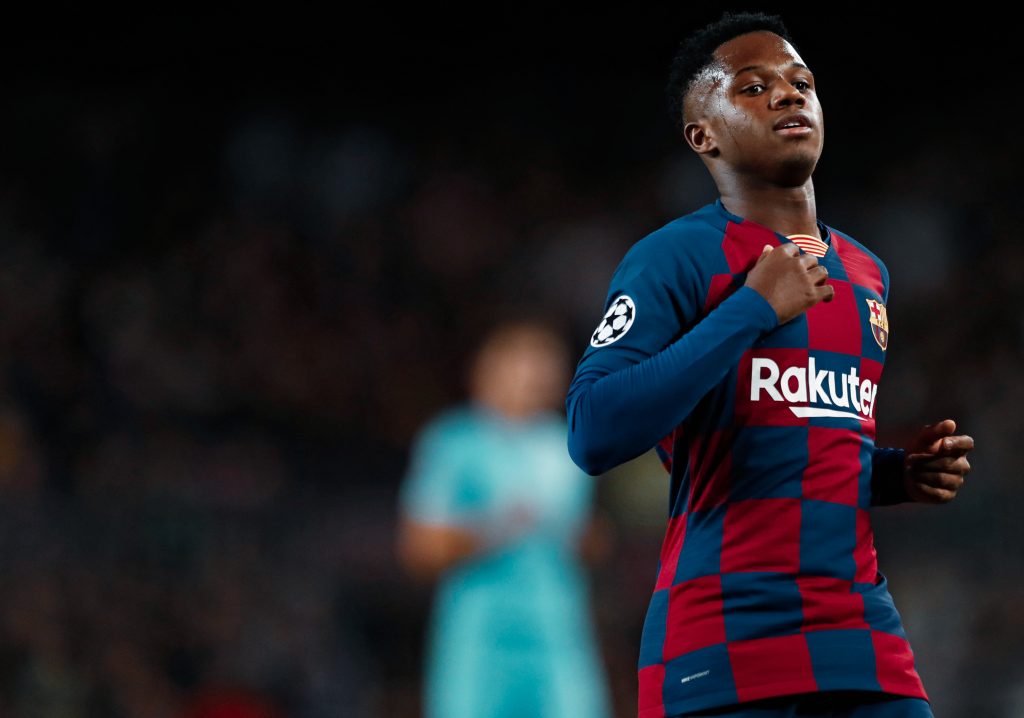 Barcelona president Josep Maria Bartomeu confirmed that the young trio of Ronald Araújo, Riqui Puig and Ansu Fati will officially be first team players for the 2020/21 season. What can Barça hope to gain from their promotions?

The promise of bringing up academy players to the first team is a widely misused gambit to win the support of culés. Every admirer of the Catalan club has that insatiable longing to see homegrown players flourish on the big stages. The transcendent golden generation left football fans across the globe with jaws dropped, managers baffled and culés delirious.

The story since has not been too pleasant for La Masía. The academy that once produced all the three finalists for the prestigious Ballon d’Or lost its former lustre. The number of players bridging the gap between the B team and the first team saw a steep fall. Budding talents that seemed to have a bright future were either shipped off or left on their own accord. The pressure to deliver titles restrained managers from giving the academy players any opportunities.

Quique Setién too arrived at Barcelona with the same commitment. He promised to outdo his predecessor in terms of providing the youth with a level platform. Delivering on that promise is a different ballgame altogether, especially for a new coach with minimal history at the club.

Bringing on Riqui Puig in his first game in charge, he displayed his intentions loud and clear. As time progressed, a hiatus developed where the team once again saw minimal contribution from Barça B. Unfortunate circumstances like the long term injury to Ousmane Dembélé, the dubious transfer of Arthur Melo and the recurrent injuries to Samuel Umtiti, however, helped the coach stick to his words. They may have been forced moves, but he still deserves the credit nevertheless.

“Araújo, Riqui and Ansu will have first team numbers next season”

The 2019/20 season saw fairytale success stories for two young debutants from the academy. While Riqui Puig has been training with the team for a fairly long time, this was the year he finally broke through. The other story comes from not the B team but the Juvenil A in the form of Ansu Fati. In what has been an incredible debut season, he too has made his presence felt loud and clear. Ronald Araújo, despite his limited appearances, has made a good impression in the few games he has played.

With reports emerging that all the three of Araújo, Riqui and Ansu Fati could be handed spots in the first team next season, here is a look at what they can provide.

At the beginning of the season, Ronald Araújo was not even in direct competition for a spot in the first team. With Gerard Piqué and Clément Lenglet retaining their starting positions, and the likes of Umtiti and Jean Clair-Todibo in the bench, the Uruguayan was not even in the squad. Todibo’s sudden departure on loan to Schalke, clearing up a spot in the squad. That marked the arrival of Araújo to the first team. With Umtiti never regaining his former flair and Todibo likely to be sold, Ronald’s importance in the squad grows multifold.

The 21-year-old has featured for Barcelona six times this season, completing the full 90 on two occasions. Incidentally, Barcelona have won every encounter in which he has featured. Standing tall at 6’3, Araújo promises a dominant presence in defence. His aerial ability is well noted, and his physicality is an asset to the team. Having shown tremendous composure on the ball, he has won the confidence of the coach and his teammates.

Despite not being at La Masía for a most of his youth, Araújo has shown composure on and off the ball. With 94% passes completed in his 6 games for the first team, there is no doubt of his quality on the ball. Astonishingly, Araújo holds the record for being the fastest player in the league this season with a sprint of 34.91 kmph, a feat he achieved in the last matchday against Deportivo Alavés.

With a weakened squad in dire need of rejuvenation, youngsters like Ronald Araújo, Riqui Puig and Ansu Fati are starting to have a place in the team | Photo by David Ramos via Getty Images

There is no doubt that Ronald Araújo is mature beyond his years. An aerial presence difficult to handle, presence of mind, physicality and agility, at the same time having the accuracy and deftness on the ball is a profile worth working on. With Gerard Piqué running dangerously close to calling it time, Araújo’s promotion would be more than just a good gamble by Barcelona to find an apt replacement.

If a 20-year-old phenomenon can make an entire fanbase forget about a controversial transfer of a fan favourite, it speaks volumes about his talent. Riqui Puig has always considered to be the next big thing from the infamous La Masía. The immense depth in midfield, however, has always been the hurdle that prevented him from getting chances with the first team. An unfathomable turn of events, though, has now seen him become one of the most vital parts of Quique Setién’s system.

Riqui Puig is not an option. His presence is a necessity in this team. The midfield is often the most critical part of a team like Barcelona, and the most challenging to get right. In spite of having an abundance of midfielders, it is no secret that the team lacked a player of the right profile. And as people have been saying for years, the answer indeed did lie in the academy.

Puig’s agility and speed offer an X factor. His composure on the ball and his off the ball movement always provide a passing outlet to teammates. His inclusion in the team has brought an enhanced aspect of verticality to the play, something the team desperately needed. Most importantly, his quick passing and ability to break the lines helps the team create something out of nothing. It is astonishing how a single player can bring life into the dull spells of possession that the team often suffers from.

If Riqui is promoted, it could be one of the best decisions the club has taken in years. After the Arthur Melo – Miralem Pjanić swap, the average age of the misfield soars even higher. The Spaniard offers something that no other player can provide. It looks imminent that he could be a mainstay in this team for years to come. After the impression he has made in the last few games there will certainly no longer be any dearth of chances for the starlet.

The biggest success story for Barcelona and one of Europe’s big talking points this season has been Ansu Fati. The long term injury to Ousmane Dembélé got the club searching for alternatives to provide the same repertoire. Credit to Ernesto Valverde, a spark was seen in a certain 16-year-old at Juvenil A.

Since his first team debut against Real Betis, he has hardly ever put a foot wrong. Across the season, he has played for 24 league games for the first team, starting just under half. The absence of any direct competition helped his case as the squad lacked true wingers.

What sets Fati apart from his peers is his fearlessness. In a team that boasts of greats like Lionel Messi and Luis Suárez, he isn’t scared to take a shot on goal given an opportunity. He may not have the pace of Dembélé, but his presence of mind and maturity make up for it. As an out and out winger, he lessens the load on Jordi Alba and creates more space for the mainstay strikers.

The situation next season will be different, however. The return of Ousmane Dembele and the arrival of Francisco Trincão provide more options on the wings. He will surely see lesser opportunities, and directly promoting him to the first team may not be the best idea. Nonetheless, it is undoubtedly essential for him to be a part of Setién’s plans, as game time is an absolute necessity at this stage of his growth. He too will certainly have a large part in the future of the club, however, keeping him at the B team while still being called up seems a better option at the moment.

Barcelona is at a very critical stage. As one generation phases out, youngsters now seem ready to take up responsibility. This must be carried out gradually and strategically. The next season will have a significant impact on the future of the team.

As the current stars begin to wane, it is time for a new generation. Ronald Araújo, Riqui and Ansu Fati provide something remarkable, and their promotion would be wonderful news to both the club and supporters alike.