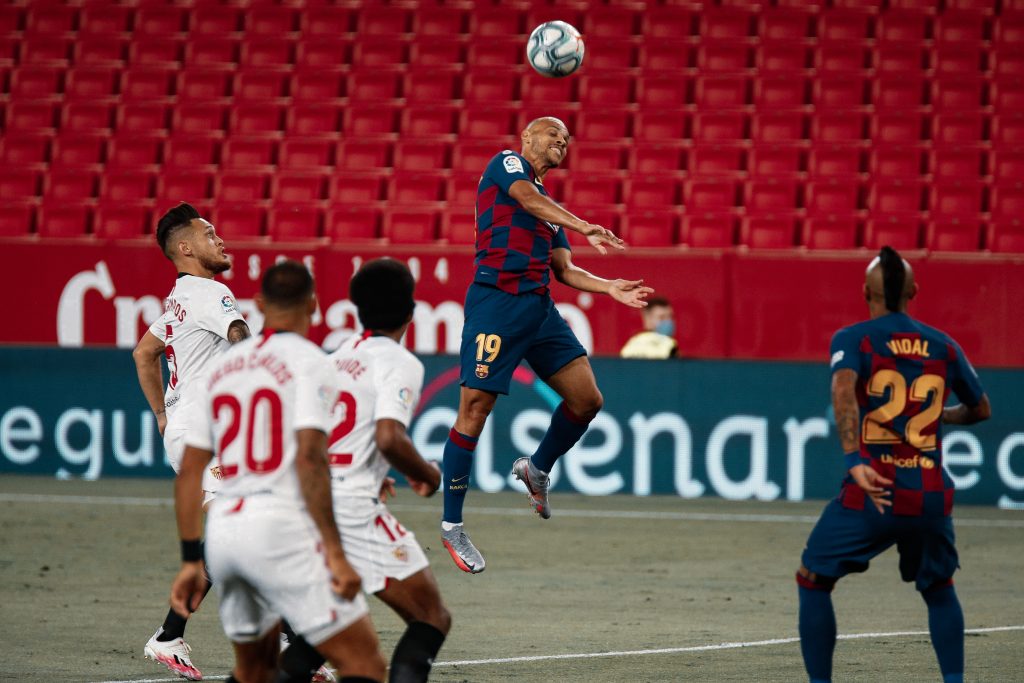 The Friday match against Sevilla began with so much promise for Barcelona, but ended with heartbreak after some wrong choices. This analysis will go deeper into the statistics from the match, and what they reveal about the disappointing result.

Although the start was promising for the visitors, Friday’s 0–0 draw against Sevilla at the Ramón Sánchez Pizjuán was a disappointment for Barcelona, as Real Madrid now have the advantage in the league. But what does data suggest from such goalless draw?

Through the opening thirty minutes, Barcelona turned in perhaps their best start to a match this season. There had been some doubts about the team selection of Quique Setién coming in, but the starters proved him correct early on. Despite playing away against the third-placed team in La Liga, the blaugranas showed some of their best pressing and positional play of the season. Even the players who seem to have come under the most heat in recent times – Iván Rakitić and Nélson Semedo – were putting in a brilliant shift. It looked set to be an excellent Barcelona performance, and a crucial three points in the title race.

In spite of the early domination by Barça, they just could not create anything significant in the final third. This lack of conviction in the attack is reflected by Barcelona’s low expected goals tally. Expected goals is a stat which represents the probability of each shot going in, taking into account factors such as the location of the shot and the type of pass it came off of.

The expected goals, or xG, of both sides through the first half | Graph via Understat

While Barça were creating more than Sevilla, none of the chances were truly dangerous. According to Understat, Barcelona’s expected goal tally in the first half was just 0.19. In fact, the best chance of the half for the Catalans did not even come from open play. Instead, it was Lionel Messi’s free-kick, which ended up being cleared off the line by Jules Koundé, that had an xG of 0.09. Clearly, Barça needed to turn their possession into better chances in the second half. However, this did not happen.

With five substitutions and forty-five minutes remaining, there were still plenty of opportunities for Quique Setién to change the game. But with the level of play declining after the great start, the manager failed to utilize the correct adjustments. This ended up costing the team greatly as Barça still could not muster up any significant attacking threat until very late in the match.

The expected goals, or xG, of Barcelona and Sevilla through the whole match | Graph via Understat

It wasn’t until the 88th minute that Barcelona had their first shot with an expected goal value of higher than 0.11. This was, of course, the Luis Suárez first-time, left-footed effort following a ball into the box by Jordi Alba. That was Barça’s best chance of the match, and it still had an xG of just 0.29.

As the chart shows, it took the azulgranas far too long to create a good opportunity, and they only really had one in the whole match. A player the caliber of Suárez could have scored that chance. Nevertheless, it is incredibly troubling that the best one Barça could create was a tough first-time shot on the weak foot of El Pistolero.

While the attack struggled, Barcelona’s defense performed incredibly well. Sevilla took eight shots in the match, and their first seven had an average xG of just about 0.04. Los Nervionenses could not trouble Marc-André ter Stegen whatsoever, and each member of the back four turned in a performance deserving of a victory.

In a great performance, there was one late error from Barça’s defence. As shown in the last chart, Sevilla’s expected goals shot up in the last few minutes of the match. This was due to an awful headed clearance by Jordi Alba, which caused the ball to fall to Real Madrid loanee Sergio Reguilón. He took a shot from just outside the six yard box, and it had an xG of 0.54. Luckily, the attempt was fitting for the weak foot of a fullback, and Ter Stegen had no issue saving it.

A map showing the expected goals of each shot in the match, and the total for each team. Barcelona’s shots are on the left, Sevilla’s are on the right. The two best chances of the match, the shots by Reguilón and Suárez, are labeled | Graph via Understat

While this chance could have cost Barcelona even the one point of a draw, it should not take away from an excellent defensive performance. It took until the 91st minute for Sevilla to create a significant opportunity, and this was when Barça were pushing numbers forward in search of a winner. The source of this lone chance was also down to a fluke individual error by Alba, which could have easily been prevented. Outside of this, Barcelona’s defensive unit was brilliantly organized and aware for the whole match.

Barcelona came into the restart knowing each match would be like a final, and in this one they undoubtedly failed. With two points dropped, the fate of the La Liga title is now in Real Madrid’s hands. Additionally, the pressure on Quique Setién is building, and for his managerial performance in this match, that seems to be deserved.

The question has to be asked: Why were there not more minutes for Ansu Fati and Riqui Puig? Barcelona were struggling to create, and needed a spark similar to the one Fati provided against Leganés, but he did not even get on the pitch. The midfield also needed a rejuvenation due to a clear drop in performance as the match progressed, but Riqui only got on in the 88th minute.

Clearly, Quique Setién will have to adjust his strategy for substitutions going forward. With such a vibrant, dynamic start, only the final ball seemed to be missing. But instead of bringing on players who could supply this, Setién went the pragmatic route and paid the price. It was a brilliant performance in the back, but the attack was clearly not at the same level, and neither was the manager.