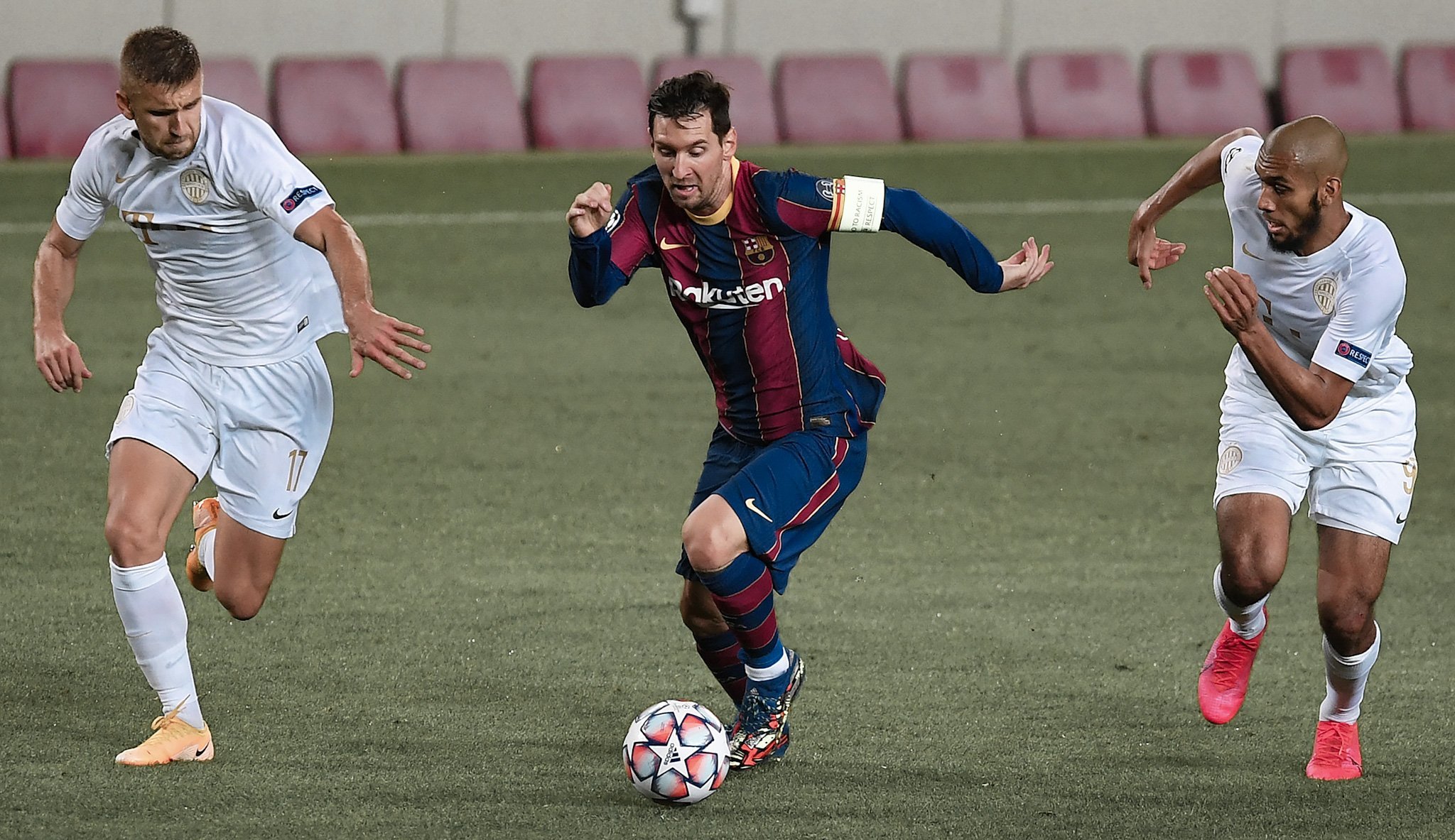 Little over two months ago, the greatest competition in club football came to a close with Bayern Munich, undoubtedly the best team in the tournament, clinching their sixth European crown in a 1-0 victory against Thomas Tuchel’s PSG in Lisbon. In this article we take a look at Ronald Koeman’s Barcelona, the squad’s depth and what we can expect from them as well as the other potential challengers for club football’s greatest prize.

For Cules everywhere over the past four years, the UEFA Champions League has had starts as sweet as their ends have been bitter. Humiliations at the hands of Juventus, AS Roma, Liverpool and most recently Bayern in the squad’s 2-8 mauling have left an indelible imprint in the hearts and minds of its players and supporters. With club president Jose Maria Bartomeu affirmatively stating that this won’t be a year for a rebuild and that Barcelona will once again challenge for everything available, is a Champions League title a realistic prospect for the Catalans?

Salient to Bayern’s European success was strength in depth. Barcelona is short stacked in several key areas that could deal a massive blow to their title aspirations.

In the defence, the Catalans are bereft of quality options in the fullback positions. While a good rotation player, Sergi Roberto isn’t truly a fullback and has wavering performances when playing there. Newly signed Sergino Dest arrived in Barcelona to fill that void. While his role is to occupy the right flank, Junior Firpo’s slow adaptation to the team as well as Jordi Alba’s injury has meant that the 19-year-old was forced to take up the left-back spot. As displayed by the past four European Champions – including Barcelona itself – having quality fullbacks on either flank is vital to the overall functioning of the team in both offensive and defensive phases, and this Barcelona does not have enough of it.

The midfield should not be a cause for concern as Koeman has enough men in his ranks to play anywhere from a double pivot to a block of five if ever the need arises. He has a perfect blend of quality, quantity, youth as well as experience to go the extra mile.

The final third is where questions arise on just how far this team’s attack can go in the latter stages of the Champions League; where chances gifted are often few and far between. There is strength in numbers, with the Dutch manager boasting seven attackers in his ranks. The general output of these players, however, is wanting so far.

Lionel Messi seems to be having trouble adapting to the novel system applied by Koeman. The Argentine, thus far, has registered fifteen shots in La Liga with just but a goal to his name – and that too via a penalty.

Antoine Griezmann, too, is having a tough run of form and seems completely void of confidence in his striking abilities whenever an opportunity presents itself. Ousmane Dembele is recovering from a lengthy injury which kept him out of football for close to a year. The bigger concern with him is his inability to gel in with the team. As per several reports, the manager is far from impressed by his tactical understanding of the game.

Of the four remaining, Francisco Trincao and Ansu Fati have shown some promise as we saw yesterday, Philippe Coutinho seems to have recovered his lost form, and Martin Braithwaite looks more inclined to take up a substitute role than that of a starter.

Overall not very encouraging signs from the European hopefuls.

A Look at Barcelona’s UCL Group


For this new chapter in the Champions League, Ronald Koeman’s men will face Hungarian champions Ferencvaros, Ukrainian league leaders Dynamo Kyiv and Andrea Pirlo’s Juventus en route to the round of sixteen.

It stands without saying that the Italians and the Catalans are favourites to win the group given the overwhelming difference in class between themselves and the rest but which of the two will win it is difficult to predict. Both clubs are under some form of reconstruction for the long term with club legends (Andrea Pirlo and Ronald Koeman) coming back managers to replenish their ageing squads with new blood with the goal of forming a dynasty for the next few years.

That said, both teams have started their road to the UCL trophy in impressive fashion; Juventus registered a 2-0 victory over Dynamo, while Barcelona hammered Ferencvaros courtesy of a Lionel Messi – Frenkie de Jong masterclass.

More often than not, it’s the side from the third pot that determines just how strenuous the group will be. With all due respect to the Ukrainians, their presence offers the Catalans a breath of fresh air as the past three editions of the UCL have featured some tough opponents such as Tottenham Hotspur and Inter Milan – twice.

Ferencvaros meanwhile are enjoying their first taste of Champions League football in 25 years and are the underdogs of the group. They did trouble Barça yesternight during the initial stages of the game, coming awfully close to scoring. While not that big a threat individually, the Fradi can lay claim to their victory over Celtic in qualifying as a reason not to write them off just yet.

We predict a couple of points seperating Barcelona and Juventus come final day; Dynamo Kyiv will prove a much tougher opponent than earlier estimated and beat one of the top two. Still, it won’t be a fairytale return for the Hungarians as they finish fourth on the standings.

Barça Universal prediction of the group:

Barcelona’s start to the campaign, while promising, should not be taken as a mark in stone. In the knockout stages of the Champions League, the Blaugrana is always unpredictable. Away from home, they almost always produce lacklustre results, only for them to atone for them at the Camp Nou. Such performances aren’t by any means sustainable and the fact that the Catalans are yet to curb this problem four years since its start shows that they truly have a long way to go before they can reasonably challenge for the title.

After a mauling as humiliating as the one the Catalans suffered at the hands of Bayern Munich, they will surely want to make amends for their failures, but it would be safe to predict them making it to the quarter-finals at worst and the semi-finals at best. Getting to the final will take plenty of fortune, tactical ingenuity and flexibility from Koeman and perhaps some individual brilliance from Messi.

A Brief Look at the Challengers


1. Bayern Munich: As the champions and the undisputed best team in Europe, it should stand without question that the Bavarians are top of the lot. They somehow bolstered their already unbelievable attack with the signing of Leroy Sane from Manchester City and will look to defend their crown this time around.

2. Paris Saint Germain: Domestic treble winners and Champions League finalists, the Parisiens will look to set the record straight and prove that what happened last season wasn’t a fluke. Boasting a stellar attack with the likes of Neymar Jr. and Kylian Mbappe in the attack, this team is capable of next to anything.

3. Liverpool: Despite their phenomenal domestic campaign, the Reds were incapable of defending their crown against Diego Simeone’s Atletico Madrid last season. They will look to make amends for that failure and reclaim the throne of the best.

4. Manchester City: Luck is something that the Cityzens didn’t have on their side last season. Despite creating a flurry of chances the, the Sky Blues succumbed to a 1-3 defeat to Olympique Lyonnais. In what is rumoured by some to be Pep Guardiola’s final season in England, he will look to go out on the highest of highs.

5. Real Madrid: Fifth in this list are the defending Spanish champions Real Madrid. Despite their loss to Cadiz, the Madrid based club and their manager have enough experience in the competition to go all the way.

If Barcelona intends to reclaim the UEFA Champions League title, then they can’t afford to go into the Round of 16 without adequate depth. This haunted them in the previous seasons, and the same could repeat itself this season, especially without enough quality fullbacks. However, if that is done, and the football they play is as good as advertised, then they have no reason not to become champion a sixth time.