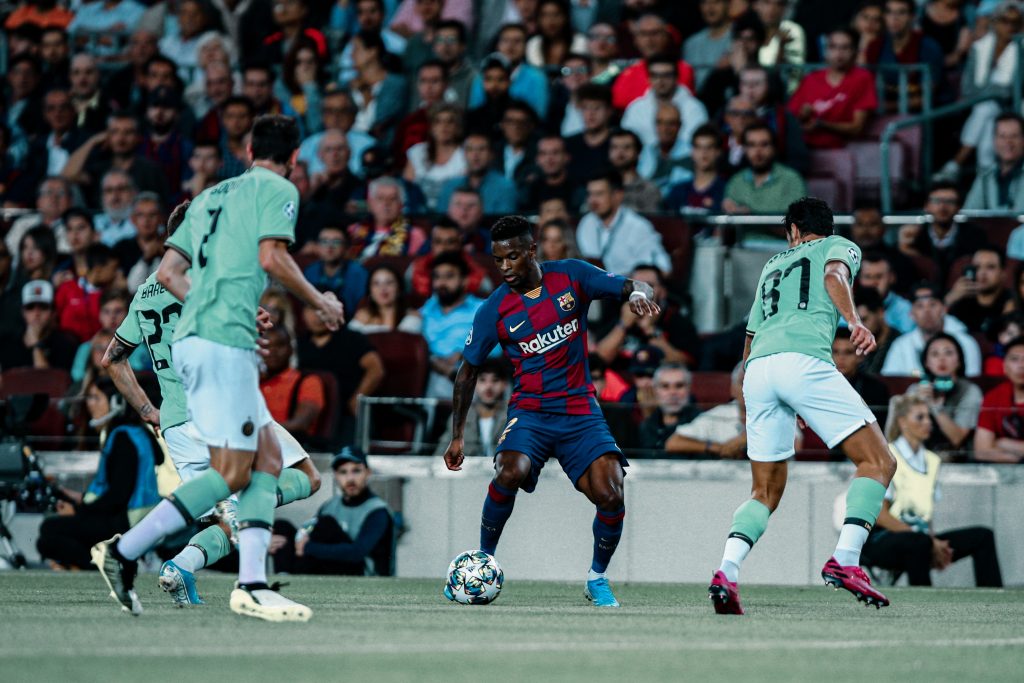 As Barcelona face Sevilla on Friday, which line-up should Quique Setién select for matchday 30 of La Liga?

On Friday night, at 22:00 CET, Barcelona will have the tough challenge of visiting Sevilla at the Ramón Sánchez Pizjuán. Three crucial points will be at stake in one of Spain’s most frightening stadiums for rivals, in spite of the absence of fans. Sevilla, third-placed in La Liga, are battling with the likes of Atlético de Madrid, Real Sociedad and Getafe to make the Champions League spots.

Meanwhile, with Real Madrid having five points less than Barcelona, but with a game in hand as they host Valencia this evening, the blaugranas cannot drop points if they want to have the advantage in the title race. Therefore, it seems sensible for Quique Setién to choose his best available line-up for matchday 30 of the league tournament.

That said, Setién will have several key absences tomorrow, with Frenkie de Jong having a calf strain, and Sergi Roberto a rib fracture. Both will miss the duel, as well as Samuel Umtiti, suspended, and Ousmane Dembélé, who won’t be available until August. With this in mind, how should Barça line up at Seville?

One of the few no-brainers in this XI. After clean sheets against Mallorca and Leganés, Ter Stegen has not been excessively challenged between the sticks in the past two games, but will face a difficult test against Sevilla’s threatening attack. While the German could be rested at some point, tomorrow does not seem the optimal day to do so.

With Sergi Roberto injured, it looks clear that Nélson Semedo will be deployed at right-back this time. The Catalan had been preferred by Quique in the first two post-pandemic matches, but on this occasion the Cantabrian manager only has one option, and that’s the Portuguese.

With the absence of Sergi Roberto, Nélson Semedo will start at right-back | Photo by Eric Alonso via Getty Images

In spite of Ronald Araújo‘s convincing performance against Mallorca last Saturday, this fixture against Sevilla isn’t much appropriate to rotate the main leader in defence. Gerard Piqué started in the past two matches, even if he had to be subbed out against Leganés after getting hurt in a clash with Leganés’ Roger Assalé. But, while Setién said that Piqué needed stitches, he has fully recovered now and is ready for another big encounter.

Clément Lenglet was one of the standout performers on Tuesday at the Camp Nou, making a key goal-line clearance when the scoreboard still showed a nil-nil draw. Moreover, as he had to miss the trip to Mallorca for suspension, Lenglet is rested as well and will partner up with Gerard Piqué at the back again.

With injuries and suspensions, the backline seems much more determined than all the other lines. Without Sergi Roberto and Umtiti, the picks at right-back and left centre-back are clear. But, with Sevilla’s threat and quality, Gerard Piqué and Jordi Alba continue to be irreplaceable in such big fixtures. Junior Firpo did impressively well against Leganés, assisting Ansu Fati for the opener, but Alba excelled at Mallorca too with a goal and an assist and will return from suspension tomorrow.

Sergio Busquets is another of the first names in the teamsheet at Barcelona, especially since Quique Setién was appointed in January. The azulgranas‘ metronome has reached his best level again under the new coach, and continues to set the tempo from deep midfield. Additionally, Setién gave him some minutes of rest both versus Mallorca and versus Leganés, as he wants to take close care of his form and fitness.

Here is where the thing gets spicy. For Setién, defensive midfield has often been for Sergio Busquets, left central midfield for one of Frenkie de Jong or Arthur Melo, and right central midfield for either Arturo Vidal or Iván Rakitić. Focusing on the right side first, Rakitić had a notable display against Leganés, working well off the ball and making the right moves to compensate Lionel Messi’s nature. That said, Vidal adds an extra bit of spark and energy, on and mostly off the ball. This dynamism was precisely what the culés lacked on Tuesday, especially in the first half.

❛ De Jong is a great player who gives us many things, but we do have players to replace him. I hope he recovers soon ❜

Besides, a case could be made for 20-year-old Riqui Puig. Riqui finally got a chance against Leganés, even if it was only twenty minutes in which he showcased his talent and vitality. Talking about merits, the young midfielder certainly deserves many more minutes with the first team than what he has got this season. Nonetheless, the La Masía graduate has only accumulated roughly 110 minutes in total with the senior side this campaign, so Setién may opt for other more established alternatives against nothing less than Sevilla. Still, with the several absences, Riqui could be getting more minutes as a substitute.

With Frenkie de Jong injured, there’s a free spot in the left side of midfield. On his day, Arthur Melo would be close to being irreplaceable in the team. However, he got a start against Leganés and did not seem to make the most out of it, adding little creativity in spite of his usual ball-retention skills. If Barça want to dominate possession, Arthur would be a much more preferable option than having both Vidal and Rakitić, but the Brazilian will need to step up at the Sánchez Pizjuán.

There are little doubts with this one. Apart from Marc-André ter Stegen, Lionel Messi is the only Barça player to have completed all 180 minutes in these opening two games. Furthermore, he has seemed to return in great form with two goals and two assists so far. The Argentinian will be vital against his favourite victim, Sevilla, against which he has scored a total of 37 goals. Now Messi is only one goal shy of his 700th, if we include those with Barcelona and the national team, and will be searching for it against the Nervionenses.

❛ Players such as Leo Messi are smart enough to decide when they need rest. They will warn me if they feel the need to be rotated out of the lineup. However, I will set the guidelines for when they play ❜

Upfront there will be more debate. Antoine Griezmann could be used up top again, but he did not seem as comfortable and productive as Luis Suárez normally is. Perhaps the problem with Griezmann is that he makes intelligent moves but he is not trusted by his teammates enough. In any case, Suárez’s connection and tireless job as the centre-forward makes him more difficult to handle for opposition defences. Luis is yet to start a game for the first time since his knee injury in January, but, if completely fit, he could be doing so this time.

Here the debate is even more open, with up to three players competing for a single spot: Antoine Griezmann, Martin Braithwaite and Ansu Fati. If the criteria was the tactical impact in the side, the likes of Braithwaite and Ansu have a profile that benefits Barcelona and Lionel Messi more than Griezmann. The team needs directness and selfless off-ball movements, and Martin and Ansu provide just that. With Griezmann having started the last two games, maybe Setién could try a different trio on this occasion.

❛ While he plays out wide, he has a tendency to drift into the centre. We never instruct him to stay wide because he is not that dribbling kind of player ❜

Ansu Fati comes from scoring against Leganés, while Martin Braithwaite did likewise against Mallorca. Still, for his maturity and experience, the Danish attacker may be more fitted for these high-pressure away matches. There is not only one right solution, though, and we must trust Quique Setién to get it right in this truly critical encounter.