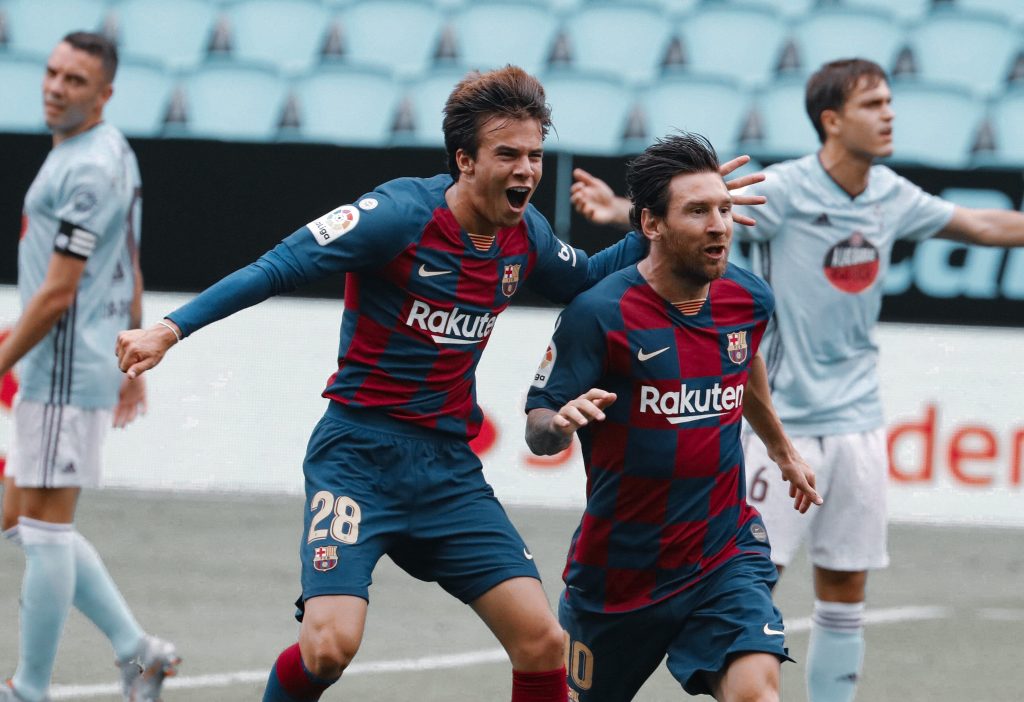 As Barcelona host Atlético de Madrid on Tuesday night, which line-up should Quique Setién pick for matchday 33 of La Liga?

Following two critical points dropped at Vigo against Celta, Barcelona will need to find their best form again to beat an improving and third-placed Atlético de Madrid at the Camp Nou. With Frenkie de Jong injured indefinitely, and Arthur Melo having completed his transfer to Juventus in spite of still being available to play for Barça, what should Quique Setién’s line-up choice be for this evening’s match?

There should be little doubts about the first name in the list. While Barcelona leaked two goals against Celta de Vigo, Marc-André ter Stegen was fundamental once more in saving one point in the last minute for Barça. If the blaugranas want to get back to their best defensive record prior to the Celta fixture, as they had recorded five consecutive clean sheets before Fyodor Smolov and Iago Aspas’ goals, Ter Stegen’s selection should not be negotiable.

At right-back, the debate is much more open than between the sticks. Sergi Roberto is returning from a rib injury that made Nélson Semedo be a starter in the last three games. If Sergi is not fully fit, it is undeniable that Semedo should start against Atlético de Madrid. But Quique Setién still seems to trust Roberto more, having even made him play through pain against Leganés before his injury aggravated. The Catalan’s role in the build-up play and circulation of the ball is much more important than Semedo’s, who needs more spaces to run. Considering Atleti are expected to use a deeper block, Sergi could be more useful in positional attacks.

Gerard Piqué was the man in charge of single-handedly keeping Barcelona’s defence tight against Celta de Vigo. While the culés ended up conceding two goals, he had to continuously fix the errors of his partner Samuel Umtiti, who left Piqué in frequent two-versus-ones against the celeste attackers. Gerard can’t miss a match of such high calibre, especially considering his impressive form in recent weeks.

After being surprisingly benched at Balaídos, Clément Lenglet should clearly be back to the XI tonight. If Samuel Umtiti had put an impressive display on Saturday, maybe there would be less certainty. But Umtiti, with poor fitness, positioning and continuous errors, didn’t cover himself in glory on the weekend. Following some rest, Lenglet is ready to partner up with Piqué at the heart of the defence.

Jordi Alba had been another of the standout performers since the return of football. Active and impactful in attack, Alba himself admitted that the extra rest had certainly benefitted him. Despite his performance against Celta de Vigo left much to be desired, if he performs at his recent level there still is a big gap separating him and Junior Firpo, mostly for a game of such magnitude.

“This break has benefitted me, because I needed to rest mentally and physically. You can’t always be at the top level. I had three injuries, but now I feel good”

One of the most improved players after the break, Iván Rakitić has earned a place in Barça’s midfield through his recent exhibitions. Apart from his winner against Athletic Club de Bilbao a week ago, in what was his first goal of the season, Rakitić has experienced a silent resurgence after being linked with a move away from the Camp Nou. With several question marks regarding the other midfielders, Iván seems to have risen in the pecking order.

Sergio Busquets missed the visit to Celta de Vigo through suspension, and Barcelona definitely noticed it. While the first half was marvellous from the visitors, Quique Setién’s men lost control as minutes went by. Busquets, another player benefitted by the break, is a master at dictating the tempos of the game. Irreplaceable for Setién.

If performances are to be prioritised over age and experience, there is no denying that Riqui Puig has done more than enough to deserve a spot in Barcelona’s starting line-up regularly. Arturo Vidal will possibly be picked by Quique Setién, for his status and know-how in such crucial duels. Meanwhile, facing Atlético de Madrid would be the biggest challenge in Riqui’s career. Yet he has demonstrated that he is ready for it. Very dynamic and proactive, Puig continuously searches for solutions on and off the ball.

Riqui Puig needs no experience to know what it means to play for Barcelona | Photo by Lalo R. Villar / Cordon Press via Imago

Additionally, it must be considered that Arthur Melo is not at his best level either. In fact, his transfer to Juventus, confirmed on Monday, may have him a bit unfocused for the present duel. In terms of merits, Riqui deserves it more than most other midfielders.

Lionel Messi continues to search for his 700th professional goal. He scored and assisted in the opening post-pandemic match against Mallorca, while he found the net from the spot in the following encounter against Leganés. Since then, though, he has not managed to get a single goal against Sevilla, Athletic Club and Celta de Vigo. Possibly the Argentinian needs rest after playing the full 90 minutes in the five previous games. But certainly today is not the day Barcelona can afford such luxury.

To partner with Messi upfront, there are many available options. Among them there are Luis Suárez, Antoine Griezmann, Martin Braithwaite and Ansu Fati. The latter two could act as wingers with Leo as a false 9. Nevertheless, Luis Suárez comes from scoring a magnificent brace against Celta, in what were his first goals since his knee injury in January. Despite he needs rest too, as this would be his fourth start in a row following a long period of inactivity, he offers something to Barça and Messi that no one else can provide. A lethal version of the Uruguayan would be really favoured by the azulgranas.

Again, there are many contenders for the remaining left wing spot. Former Atleti star Antoine Griezmann looks like the main candidate, for his status and proven quality. But, having sat on the bench against Sevilla and Celta, Griezmann will need to demonstrate more to have a guaranteed place in the team.

On the other hand, like Riqui Puig, Ansu Fati has been adding a breath of fresh air to Barcelona lately. His dribbling and one-on-ones, ability to stay patiently out wide, and gift and decisiveness in the final third should be taken into high consideration in spite of his 17 years of age. Again, though, the debate lies on experience versus merits.