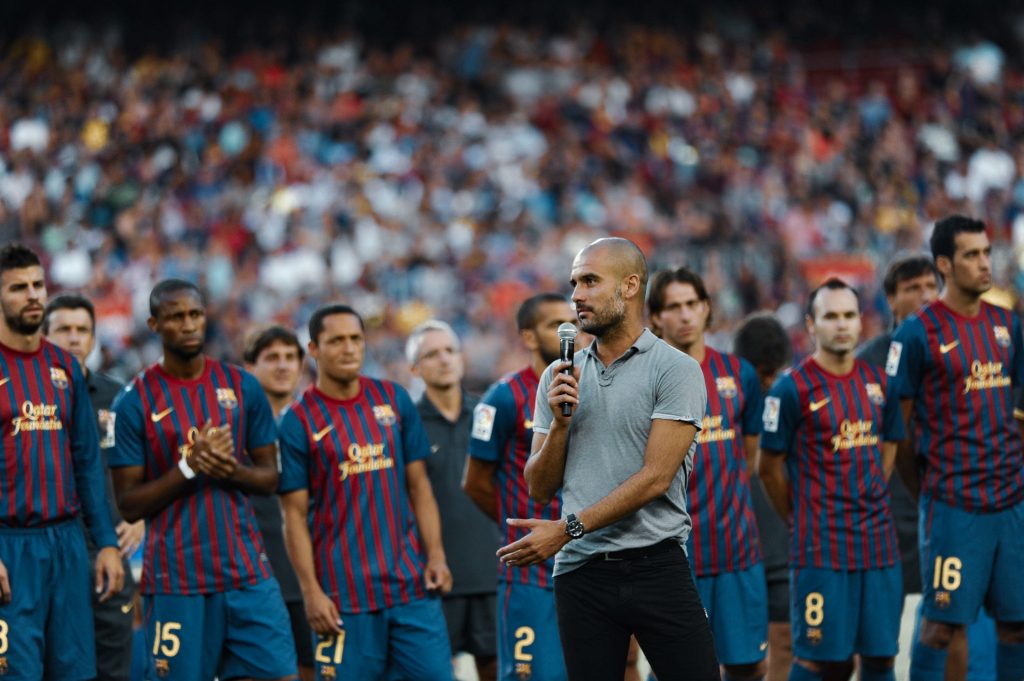 After having imagined what would have happened if Di Stéfano had joined Barcelona instead of Madrid, we ask ourselves: what if Pep Guardiola had never coached the blaugranas?

Those unforgettable El Clásico victories, that late Iniesta goal, the legendary 2009 Sextuple, the beautiful Positional Play style of play and, of course, those legendary Lionel Messi goals. They send all culés back to a time when the team was on top of the world with one of the best and most successful sides the world had ever seen. They remind us of the golden days when Barcça were unbeatable. All those memories had one architect, who took the club to heights never seen before. That man was Pep Guordiola, one of the most influential managers in Barcelona history. But what if Pep had never joined the first team? What if Pep had never taken the reins?

Pep was promoted to the senior side in 2008, replacing Frank Rijkaard, with the club having gone two years without a trophy. His arrival changed things drastically, with the club winning their first treble – Champions League, La Liga and Copa del Rey – and a record-breaking six trophies in the calendar year of 2009. The Catalan was the most successful coach in Barcelona history with 14 trophies in total to his name. But it was the manner in which he achieved success that really put the cherry on top of the cake. His beautiful attacking football could easily dismantle even the best sides and at times left even the opposition managers in awe. It was his tactics, his transfers and his mentality that transformed Barça.

Without Guardiola, the blaugranas would have been left in a confusing state with the ageing squad in dire need of trophies. He took risks by offloading legends such as Deco, Ronaldinho and Zambrotta whilst bringing in Dani Alves and Gerard Piqué, who went on to become legends for the club. Risks that few managers would opt to take. His 4–3–3 and later 3–4–3 diamond had its roots in Cruyff’s style of play, but Pep built on it, using his squad to maximum capacity. No manager could have replicated Guardiola’s incredible tactics and immaculate squad balance.

With his approach on the ball already excellent, he revolutionised Barcelona off the ball. His six-second rule often bolstered Barça against counter-attacks and helped to regain possession. It was Pep’s genius which led the azulgranas to maintain attacking play without suffering on the defensive side too much, a trait the recent Barcelona sides are lacking. Guardiola found the tactical solution to breaking down all the best sides in Europe. He introduced a new style of play which no other manager had seen before, rendering them defenceless as Barcelona destroyed their enemies.

But perhaps his greatest achievement was his influence on the players. He mentored Messi, adding finesse to his raw talent. He unleashed the Argentinian’s full potential and shaped him into possibly the greatest player the world has ever seen. Leo had already announced himself to the world, but it was under Pep that he truly matured. His decision to play Messi as a false 9 was a masterstroke, taking advantage of his creativity, vision and goalscoring ability. Busquets adopted the role of the midfield pivot and has gone on to become one of the best holding midfielders ever. Iniesta and Xavi developed a lethal combination with Messi given their perfect passing and awareness, while Piqué, Alves and Pedro developed into the best in their positions.

❛ The best team I have ever faced ❜

In a world without Pep Guardiola, it is quite possible Barcelona would have still gone on to become successful given the boatloads of talent in their squad and the presence of the talismanic Leo Messi. But more than the silverware, it was Pep’s contribution to Barcelona’s philosophy that would have been affected the most in his absence. He built on Cruyffian principles and gave Barcelona a refined and, frankly speaking, a gorgeous identity. An identity that every culé identifies with and one which would have been dearly missed. He gave the football community a side that was an absolute joy to watch, and left legends like Sir Alex Ferguson stunned. He developed players unlike anyone else and helped bring out their hidden prospects. His eye for talent is irreplaceable. Maybe Barcelona would have become the best even in a world without Pep, or maybe they would have gone on a downhill until the next great manager had come along. But I do know one thing for sure. I am glad I grew up in a world where Guordiola was at the helm.