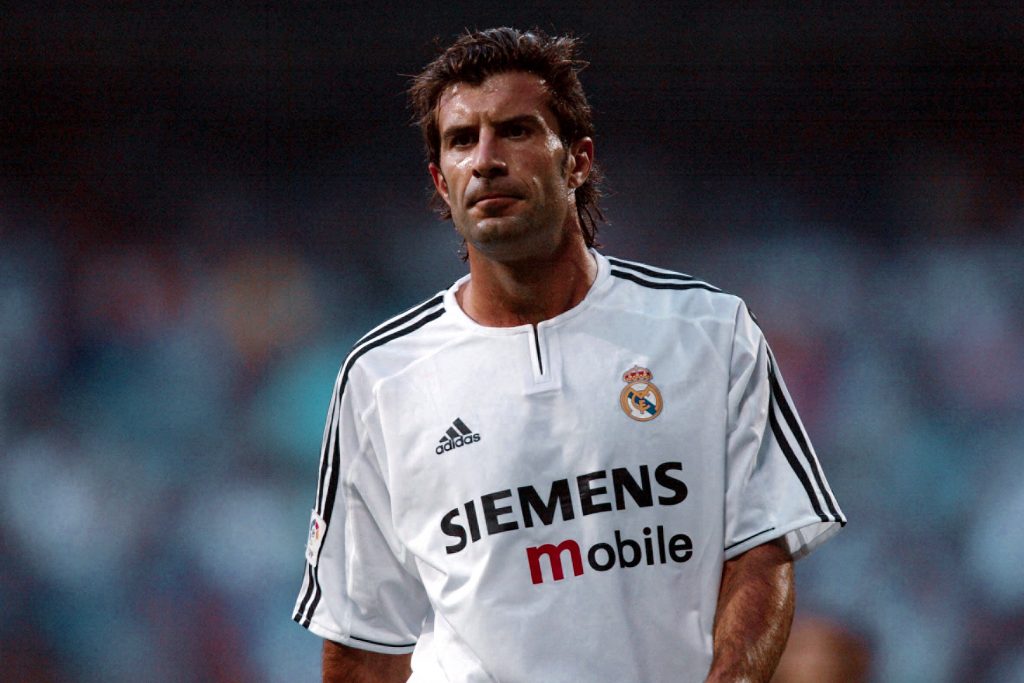 After having asked ourselves what would have happened if Di Stéfano had joined Barcelona instead of Madrid, and if Guardiola had never coached the Catalans, we wonder what if Luís Figo had stayed at the Camp Nou.

When the name Luís Figo is said in front of Barcelona fans, words like traitor come to mind. His 62 million euro transfer to Real Madrid left a bitter taste in the mouths of culés and his visits to Camp Nou were, to say the least, unwelcome. A once fan favourite had now transferred to their biggest enemy. But what if Figo had never left for Los Blancos? What if he had continued his career at Catalonia?

Figo joined Barça in 1995 following a controversy regarding his contract in Italy. He formed great partnerships first with Ronaldo and then with Rivaldo. After Cruyff’s departure, Bobby Robson was brought in as a replacement. In the 1996/97 campaign, the league slipped through Barcelona’s hands, but they managed to bring in trophies by winning the Copa del Rey and the UEFA Cup Winner’s Cup. Despite Robson’s promising first year, changes were made at the Camp Nou with Louis Van Gaal taking the reins for the 1997/98 term.

The team did bring in success by winning two La Ligas and one Copa del Rey, but it wasn’t the same free flowing side it used to be. But Figo rose up as Barça’s main man, scoring crucial goals and leading the club to success on his path to becoming the best player in the world. In the 1999/2000 season, the club crashed down to earth domestically though it did offer competition on the European stage. Yet Figo continued to grow as a player and was a shining star amongst the club’s darkness. In the summer of 2000, both Figo and Van Gaal departed, leaving the club in a state of chaos.

❛ It was a tough and important decision because I left a city that was giving me a lot and where I was in a good position, but when you feel you are not acknowledged for what you’re doing and you receive an offer from another club, you think about it ❜

Luís Figo
on his exit from Barcelona to Madrid

Figo was known for his creativity and ability to beat defenders, often using step overs to get past opponents. In the year 2000, Figo won the Ballon d’Or largely for his contribution to the blaugranas. His departure generated immense hatred amongst the culés for a player whom they had adored. But not only did his transfer affect Barça, as it also affected Figo’s career. At Barcelona he was their most important player, often looked to for inspiration as he was the club captain, shouldering responsibility and leading the team through the ups and downs. Nonetheless, at the Bernabéu, he was just one among many Galácticos alongside Zidane, Beckham, Ronaldo and Michael Owen – even if he was a fundamental one, of course.

❛ To play for Barcelona means to have an opportunity for a brilliant career. But to reach the top of it, you have to play for Real Madrid ❜

At Madrid, Figo did achieve success, winning the Champions League twice and La Liga once, but success escaped them for the three years after 2003. With the signing of Beckham, Luís was forced to compete for the right wing position and also had to play out of position at times. Finally he left for Inter Milan in 2005.

Had Figo stayed at Barcelona, he would have remained the club’s talisman. With his help, it would have been easier to rebuild the team and bring it back to its former glory. With Ronaldinho joining in 2003, Samuel Eto’o in 2004 and Xavi, Puyol, Iniesta and Lionel Messi coming through the academy in the years following, Figo would have laid a stronger foundation for the azulgranas to build on. He would have been in his 30s at the beginning of Barça’s golden generation and a world-class player like him, alongside other greats like Ronaldinho, would have given Barcelona a head start. With him, the club would have had a leader to guide and influence their La Masía graduates and to team up with Dinho and Eto’o. Since those would have been the twilight years of his career, he would have helped the club in transitioning to a younger generation by providing a reliable back-up if the youngsters gave a poor showing while also adding the essential experience to the side.

For Luís Figo himself, maybe the Champions League would have escaped him during his prime and it might have been won by him with Barcelona in his final few years. Furthermore, he would have been spared the hatred that his former fans gave him. He would still have a high level of respect in the eyes of us culés. Moreover, instead of being one of Real Madrid’s many superstars, he would have been a standout player beloved to his fans. Whether his presence would have guaranteed success remains a mystery we cannot know the answer to. But it would definitely have eased the transition to the newer, younger generation.

• Pjanić to Barça: Sensible transfer or simply a P(j)anic buy?