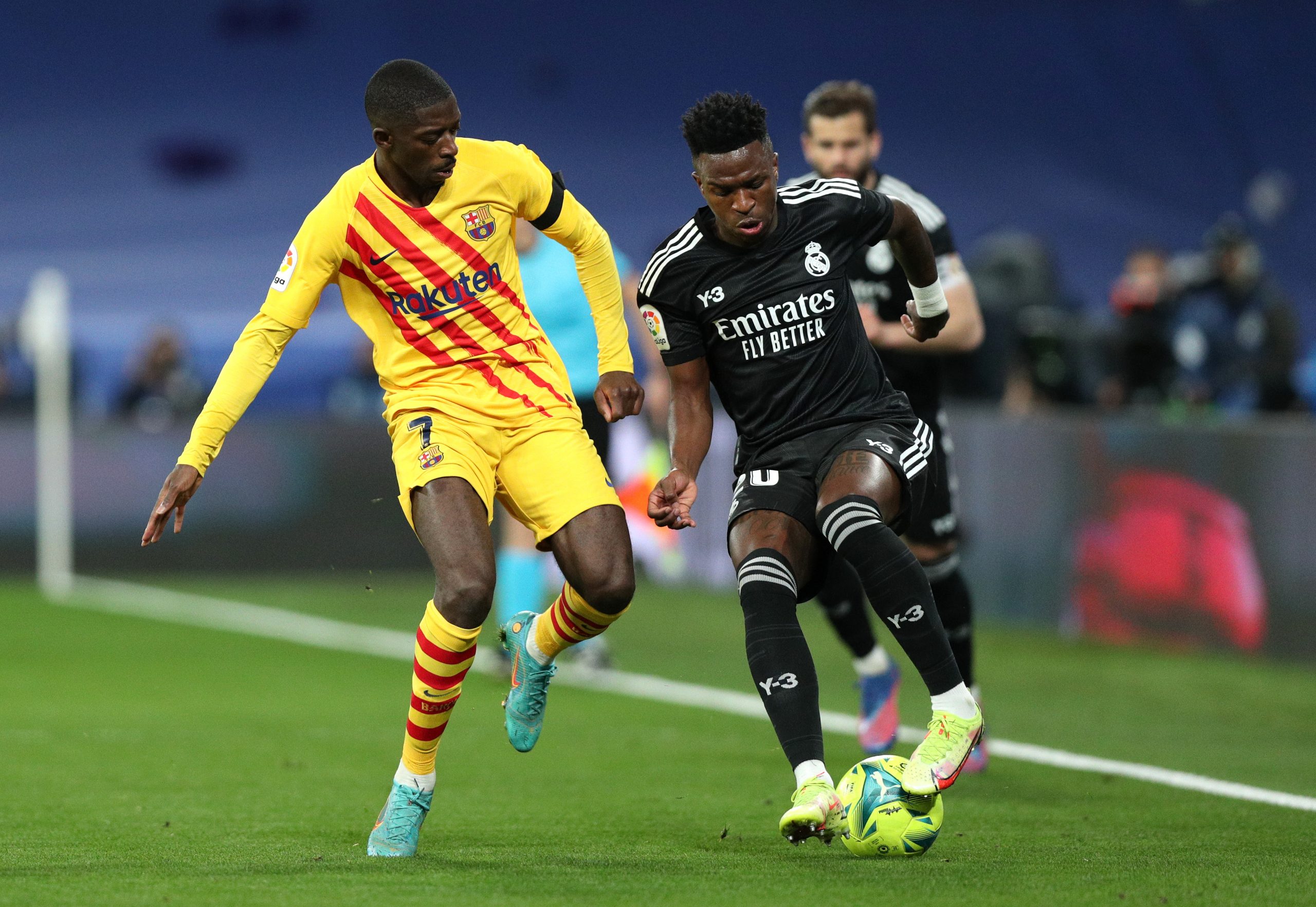 Barcelona’s strong start to the season, coupled with their excellent summer transfer window has led to the return of the good old parallels between the Catalans and their arch-rivals Real Madrid, both of who are expected to fight for the title this season.

The newly-formed rivalry between Robert Lewandowski and Karim Benzema has already been well documented.

But another rivalry taking shape in recent weeks is Ousmane Dembele and Vinicius Junior, especially in light of the latter’s return to prominence.

Dembele has been heavily involved in Barça’s attacking play in recent weeks, notably racking up one goal and four assists in five competitive matches. Vinicius, on the other hand, has registered five goals and two assists in his last two seven competitive games.

Here, at Barça Universal, we will take a deep dive into the numbers of Vinicius and Dembele so far this season.

One of the main elements that demarcates a winger is the ability to carry the ball around in the final third and make life difficult for the opposition defenders.

Between the two, Vinicius (6.05 per 90) has attempted a slightly more dribbles than Dembele (5.29 per 90) so far this season. But the two of them have a similar success rate around 34%, though Vinicius does average over 2 completed dribbles per game.

Vinicius also trumps Dembele when it comes to progressive carriers, with the Real Madrid forward carrying the ball forward by at least 5 yards, almost 14 times per 90, which is higher than Dembele’s 11.8.

While dribbling and progression are an essential part of a winger’s game, chance creation is another key aspect. One would expect Dembele to dominate this field, as the Frenchman has proven to be an excellent source of creativity since the turn of the year.

Even in the current season so far, Dembele is averaging 0.59 assists per 90, compared to Vinicius’ 0.26. He has also registered a higher xA metric, which judges the cumulative xG of passes that leads to a shot, of 0.32, higher than Vinicius’ 0.24.

There is another massive disparity when it comes to assists minus xA ratio, with Dembele registering an impressive 0.24, compared to Vinicius’ meagre 0.03.

The Brazilian, though, is ahead when it comes to crosses. He has registered 0.53 crosses that go into the 18-yard box, which is almost double of Dembele’s 0.29.

But the Frenchman once again trumps, when it comes to progressive passes. He has averaged 5 progressive per 90 this season, which is indicative of his ability to not only carry the ball but also distribute possession to areas that often go in between the opposition lines.

FInally, after dribbling and chance creation, we go into the shooting metrics. It is an area where Vinicius is expected to dominate as the Brazilian is a far better scorer of the two and has recently established himself as one of the main sources of productivity for Real Madrid.

Unsurprisingly, Vinicius has a considerably higher shots on target percentage (41%) compared to Dembele (31%), even though the wingers have attempted almost the same number of shots on goal per 90.

Vinicius has a higher scoring accuracy as well, with the forward racking up a goal/shot ratio of 0.18, which is three times higher than Dembele.

However, a key piece of statistic between the two forwards when it comes to shooting numbers is the average distance of their shots. Dembele has averaged his shots at a distance of around 17 yards, which is higher than Vinicius’ 14.

This statistic highlights the style of play and the roles of these forwards in their respective matches. While Dembele is mostly a winger who shuffles in wider areas and contributes to chance creation, Vinicius is a lot more versatile operator, who likes to get into the penalty area, more often than not.

The Real Madrid superstar, though, has far better numbers overall and has proven to be a lot more effective for Los Blancos. However, Dembele’s link-up with the likes of Robert Lewandowski and Ansu Fati are improving with each passing game as well, so it will be interesting to see who comes out on top at the end of the season.