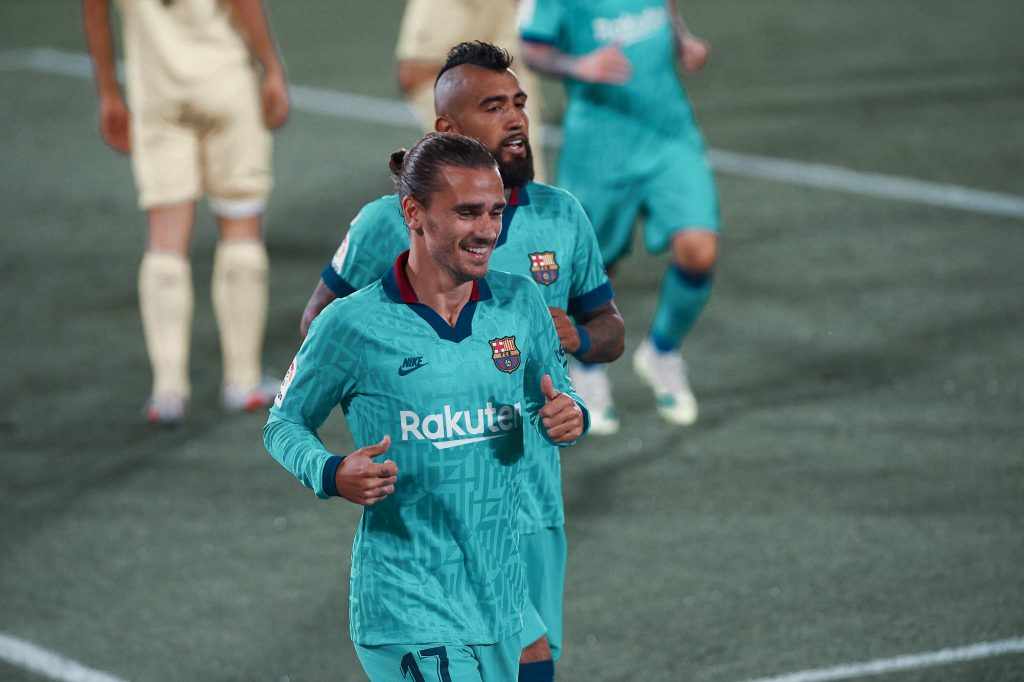 Brilliant from start to finish. These are the ratings from the Barcelona players in Sunday’s 1–4 victory over Villarreal.

While the first half involved innumerable moments of magic, Barcelona were surprisingly able to continue their supreme level of assertion after proceedings. Instead of backpedaling or losing their-hard earned rhythm, the team kept striving for more, which led them to a crucial team points. Here’s how the players fared against Villarreal away from home.

Marc-André ter Stegen enjoyed a relatively less burdensome night in goal as Barcelona’s fearsome attack kept the Yellow Submarine’s defence occupied for most of the game. Although Ter Stegen had to pick the ball out of his net in the first half, he had little to be blamed for considering the German’s save to deny Santi Cazorla’s shot deflected straight to Gerard Moreno, who took advantage of Barcelona’s poor man-marking.

Despite being partially slow to track back and restrict Santi Cazorla from allowing his side to equalise, Gerard Piqué displayed adept positioning and dealt quite well with Villarreal whenever they lashed out on the counter. Piqué wasn’t tested much on the ground, but maintained an imposing presence aerially, winning three out of four duels.

As reliable as ever. Clément Lenglet marshalled Barcelona’s backline and kept a cool head in defence. The fautless Frenchman rarely lost focus and knew the the threat Villarreal’s pacy attackers carried. Along with his proficient positioning, he won nearly all his duels.

Nélson Semedo burst forward at any given opportunity and tried adding width on the field, but his advanced role in attack cost Barça a goal as he was caught out of position. Although Barcelona were adamant on making plays through the left, the Portuguese was active and influential whenever the ball landed at his feet.

After finally getting his first ever driving licence, it seemed as if Jordi Alba’s exuberance and happiness was transmited on the pitch. The fiery full-back was a continuous threat on the left-hand side and helped the visitors acquire their first goal after he sent in a low cross in the box. Lively and energetic performance from Alba, who nearly bagged himself a goal as well.

Typical exhibition from Sergio Busquets, who silently pulled the strings in midfield. His distribution and towering figure allowed Barcelona to run rampant up front as the team had much to owe for his capabilities on the ball. Added to that, the prevalent pivot completed his defensive duties diligently.

While Arturo Vidal is known to be a tireless workhorse, the Chilean seemed weary and fatigued, as was the case against Atlético de Madrid. Vidal looked to add a certain degree of flare moving upfield, but his contribution on the pitch was not too noteworthy for Barcelona. Simply suffering the consequences of La Liga’s suffocating schedule, he desperately needs a break against Barça’s next opponent, RCD Espanyol.

After starting in five consecutive games, it seems clear that Arturo Vidal needs some rest | Photo by José Jordán / AFP via Getty Images

Despite not starting in the role he had become so accustomed to over the years, Sergi Roberto right-back wreaked havoc on the left side of the pitch, providing his side with the defence-piercing runs and creativity culés craved for from their midfield. He was heavily involved in Barça’s opener and almost bagged himself an assist for Messi’s goal, which was, woefully, ruled out. A night to remember for Sergi, who successfully silenced several doubters.

The menacing man spared Villarreal no mercy. In spite of starting every game in La Liga so far, Lionel Messi looked fresher than ever, stirring up delightful plays and terrorising defences like it was another day at the office. The Argentine played in an unfamiliar role, but one that suited him and his team’s needs flawlessly. Messi operated behind Antoine Griezmann and Luis Suárez as he dictated every move in the final third and even reserved himself two marvellous assists. Although he would be gutted to get a goal ruled out, Leo closed the gap between him and Xavi Hernández‘s record for most assists in a season.

Luis Suárez’s annoyingly unforeseeable performances are turning out to become an incredible hassle for the blaugranas, but it is on days like these that he presents his true abilties as a player. While Luisito scored a mesmerizing curler for the visitors, he even seemed efficient on the ball, not proving to be a burden for his teammates surrounding him.

At long last, Antoine Griezmann’s gears seemed well oiled and vigorous. After being a part of countless ridiculous rumours and hearsays, the Frenchman put a muzzle on his doubters’ mouth, silencing them with an applaudable display. Griezmann combined really well with Leo and Suárez, while even chipped the goalkeeper from outside the box, kindling his inner Lionel Messi. With the Argentine stationed a lot more deeper and Griezmann having more authority on the field, the number 17 stole the show in the first half.

“I am very satisfied as I suppose he will be after the goal so beautiful that he has scored. It reminded me of one from Messi against Betis”

After getting some rest on the bench, Iván Rakitić looked dynamic and energetic once brought on. He played some nice one-twos with his fellow teammates and sent a beautifully timed through ball to Messi.

While his exclusion from the starting XI was largely undeserved, Riqui Puig did not use that as an excuse to hide his virtuosic abilities in the second half. The youngster took absolutely no time in adding his dominance on the field as he produced some fabulous passes and positioned himself accurately.

At just 17 years of age, Ansu Fati is taking La Liga by storm. He just wants to have fun, and that hunger is visible everytime he steps foot on the pitch. The La Masía gem provided width to Barcelona’s left flank and scored a scintillating goal to seal a 1–4 victory. He humiliated the Villarreal defence by cutting inside precisely and then left Sergio Asenjo for dead as he clinically found the back ot the net.