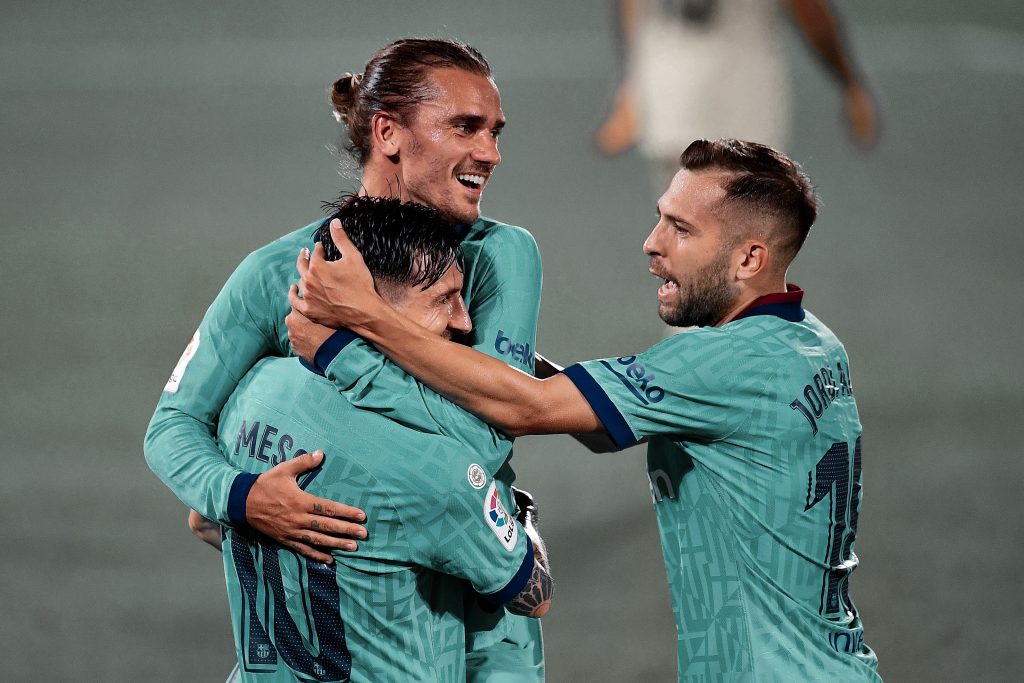 Back to winning ways with a near-perfect performance. A match summary of the Villarreal 1–4 Barcelona.

Barcelona visited Villarreal at the Estadio de la Cerámica conscious that, even by winning, the La Liga title would be as far away as before. With three draws in four matches, the latest one being a 2–2 against Atlético de Madrid, Barça already were four points behind leaders Real Madrid. Seven points, in fact, considering Madrid had beaten Athletic Club earlier on Sunday. But, even if Los Blancos continue to have a big advantage, Quique Setién’s team needed to get the job done, win, and get their confidence back. Barcelona ticked all boxes.

After two draws in a somewhat broken system, Quique Setién opted for a more organised tactical set-up, where everyone would feel freer and more at ease. A 4–3–1–2 with more movement, where Lionel Messi was in behind the strikers and the full-backs given more offensive freedom would always work against an open but valiant Villarreal side.

The first goal came early, and it was already better from Griezmann than anything post-pandemic. His impressive movement opened the way for Jordi Alba to pass it back to him into space, but Pau Torres passed it into his own goal. After a few moments of control, Barcelona’s lack of concentration cost them, and a lighting-quick counter-attack from Villarreal came their way. Paco Alcácer’s pass opened the way for Santi Cazorla. Marc-André ter Stegen parried Cazorla’s shot, but Gerard Moreno rifled it in.

After that goal, everything came together for Barça. First, Lionel Messi’s insane skills ended in a pass for Luis Suárez, and the Uruguayan striker placed it in the top corner delicately. Paco Alcácer was forced to come off, and Arturo Vidal missed a golden chance, but the half didn’t end there. Following another magical Messi dribbling moment, he backheeled it to Griezmann, who chipped it in Sergio Asenjo’s nets. A peach of a goal. All in all, a superb half for Barça, perhaps spoilt by the lack of concentration in Villarreal’s only goal.

The second half began much like the first played out. Barcelona controlled the game although they lost their finishing touch and it could’ve backfired. True, Luis Suárez had a golden chance and should have squared it to Griezmann, but Villarreal had opportunities, and especially Samuel Chukwueze. Ter Stegen spoilt the Nigerian’s night and kept Barça afloat when they needed reinsurance. Sergio Asenjo also saved Villarreal on many occasions, such as his save on substitute Martin Braithwaite’s header after a Messi free-kick had landed on the bar late in the game. He saved Villarreal from a manita and further humiliation.

For Quique Setién, he played his cards well and at the right time, with Luis Suárez departing the pitch early and Sergio Busquets, Antoine Griezmann and Gerard Piqué following them a few moments later. Come in Riqui Puig, who had another impressive display, and all the runners with young legs, like him, Ansu Fati and Ronald Araújo, all had their moments to shine. Setién tried to go all out with his subs to dynamise the game a bit, attacking Villarreal a bit more and pressing with the youngsters on the pitch.

It worked just before Ansu and Braithwaite came on when Messi scored a superb goal, after an insane sequence of passes. Ultimately, though, Arturo Vidal was offside, and VAR disallowed the goal. Sergi Roberto’s performance at the centre of the pitch or right-back was another high for the Catalan giants. Ansu added to a night of positives with his crisp finish after Jordi Alba spotted his run with a delicious chip pass. The 17-year-old scored he 9,000th goal in the club’s history.

It was surely Quique Setién’s best game with Barça, and there are so many positives to take from that match such as Antoine Griezmann, the system, Riqui Puig and Ansu Fati. Superb.

That brings an end to the match summary of the Villarreal 1–4 Barcelona.

• The one flaw to an almost perfect player: friendship