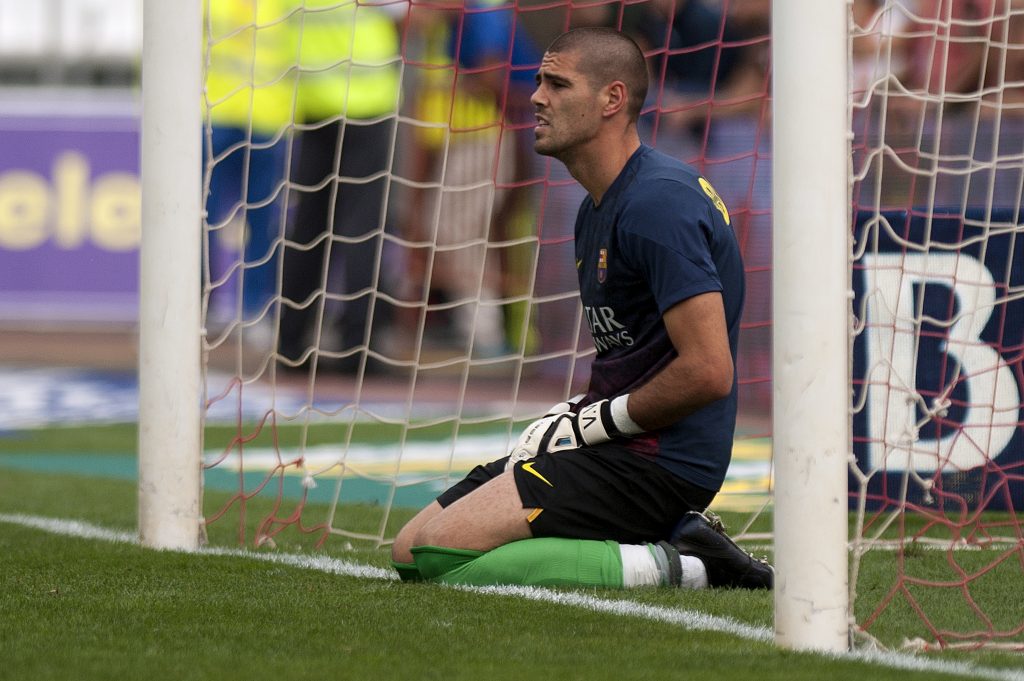 On this day in 2014, Víctor Valdés played his last game for his beloved Barcelona as he suffered a horrible injury that was the watershed in his club’s season.

Winning in football brings the most satisfaction to any player, team or board. Winning it all, however, is a whole different feeling. Often, dominant teams are cherished for the longest time and when they start to drop off it’s the end of a cycle and they shall restart from scratch. Recently, Jürgen Klopp’s Liverpool were on everyone’s lips. After their outstanding two Champions League finals in a row with one trophy to show for their troubles, the Merseyside outfit were seen as the new powerhouse of modern football. It was a fair assessment as the Reds did not taste defeat for a whole year in the Premier League, with their last loss in the league before the Watford debacle coming against Pep’s Manchester City, and they managed to overturn a 3–0 deficit in the Champions League against Barça.

For the longest time, Barcelona were dominating Europe. From 2008 to 2012, the blaugranas were on top of everyone as their style of play began to spread around the world more than a pandemic. The players from that era were legends. Recently, Chelsea wonderkid Billy Gilmour revealed in an interview that Andrés Iniesta was his idol growing up and it is quite clear to see how the magical number 8 influenced a wide variety of youngsters. Still, one of the biggest dressing room leaders of this squad was Víctor Valdés.

“Who were my idols? It was always Iniesta. I just loved the way he played, how he got the ball, passing the ball”
–– Billy Gilmour, Chelsea’s 18-year-old midfielder

Prior to Pep’s arrival at Camp Nou, Valdés was already regarded as an established keeper, especially after the 2006 Champions League final against Arsenal, in a narrow win for the culés. Valdés stayed great and was the indisputable number 1 between the sticks, restricting José Manuel Pinto to only 31 league appearances in 6 years at the club. His performances were superb but Valdés was a bit error-prone and, sadly, some fans of the newer generation forgot how much the bald keeper revolutionised the game despite being Iker Casillas’ back-up for Spain.

However, the fairytale story didn’t end well and, after announcing he was going to leave at the end of the season, Valdés played his last game as a azulgrana on this day in 2014. Falling awkwardly after catching the ball to a free-kick from Celta’s Fabián Orellana, the Spaniard was taken off on a stretcher and he was excluded of the World Cup because of an anterior cruciate ligaments damage that ruled him out for 6 months. The injury was horrid and the consequences as terrible for the Barcelona icon as for the club itself. This setback meant Valdés and Barça would part ways without even a testimonial game and he couldn’t be able to play in his last World Cup. A shame for such a great keeper and man.

For the Catalan side, it implied that for the remainder of the campaign, Pinto, Leo Messi’s best friend, would be in goal. It was quite clear that the 2013/14 season wasn’t the best for Barça. Gerardo ‘Tata’ Martino was appointed and fans were hopeful when he replaced the late Tito Villanova. In the first few months, the squad showed encouraging signs, winning the Spanish Super Cup on aggregate thanks to Neymar, and beating Madrid 2–1 with Alexis Sánchez’s super strike being the decider in that tight contest. Later, another exciting game would lead to an emphatic 4–3 win at the Bernabéu for the men in red and blue as Leo Messi bagged a hat-trick and an assist for his side.

That was all before the injury of Víctor Valdés, though. After that event, things started to go south. Atlético de Madrid took control of the league and the quarter-finals of the Champions League ended in disappointing fashion for the Camp Nou giants. After cruising past City with Valdés in goal, Simeone’s Atleti awaited. In recent years, el Cholo has done miracles in two-legged ties, only losing to Cristiano Ronaldo-led teams and beating Liverpool home and away just before the coronavirus outbreak. This was the first miracle. En route for the final, Atlético’s gameplan was superb, but it’s fair to say they needed a tad bit of luck to best Barça on a two-game basis. However, Diego Ribas’ insane goal was all the luck they needed and Pinto was criticised for it. From about 25 yards and at an improbable angle, the Brazilian scored an astonishing goal in Pinto’s nets and the Spaniard was to blame.

Had Valdés been in goal, Barça surely wouldn’t have conceded that unfortunate goal and would have gone to Madrid with more confidence and not lost the game and the tie overall. Tata Martino’s team was also a Leo Messi wrongly disallowed goal away from winning the league, but Diego Godín’s header could have been saved. Valdés’ injury was the watershed that season and the veteran keeper never recovered as he went on to play for Manchester United’s reserve team and as a back-up for Standard Liège. Last year, VV returned to the club as a coach but was fired because of his eccentricity. It has truly been a sad few years for one of our own. Not all legends get the ending they deserve.

Ter Stegen and the no longer lonely figure of the goalkeeper
What did you think of this article?