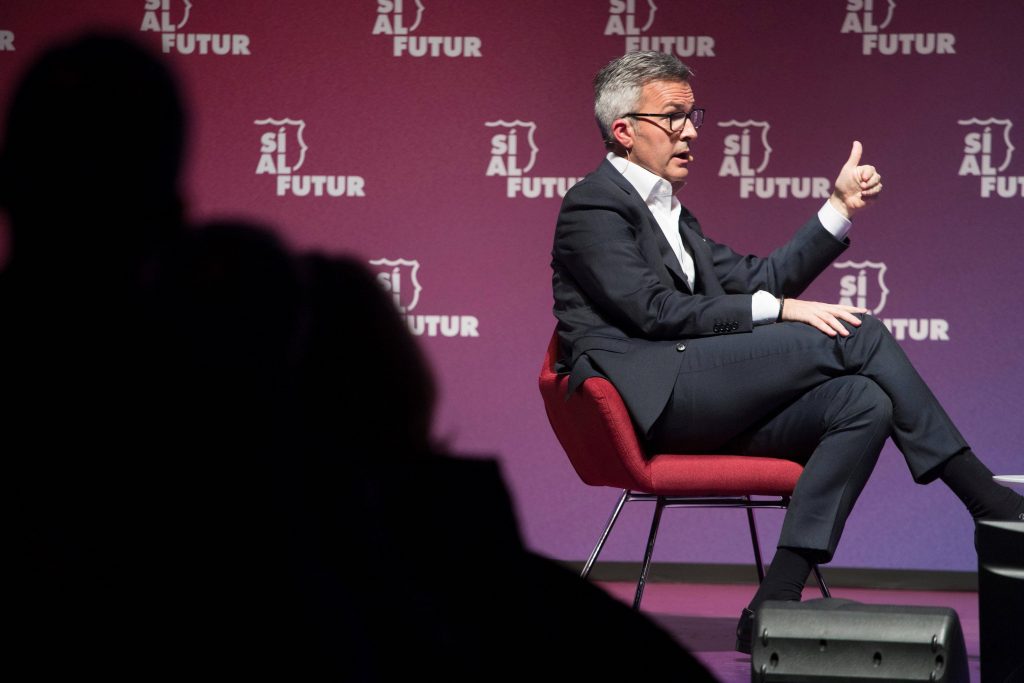 Photo by Marta Pérez via Imago

‘Sí al futur’ means ‘Yes to the future’ in Catalan. It is a project that is being led by Victor Font, a technology entrepreneur and now a Presidential candidate. This article will cover everything about Victor Font’s Sí al futur – the implementation, the execution and the aim.

Note: Barcelona/Club Members doesn’t refer to the Board members but people who have applied for a membership (learn more here).

A group of FC Barcelona members (including Victor Font), have come together to collaborate and work on this project, a project that builds the new Barca, a Barcelona without Lionel Messi. The idea of the project is to use the skills of all Barca fans with a clear aim of serving the Barcelona institution and not the leaders. The objective of the project is to change the current model of the Club and to build a more stable, a newer and a better Barcelona by 2030.

Returning to where it all began: La Masia

The Sí al futur project claims that the most viable method for Barcelona to return to the top, is by returning to its roots – the La Masia academy. La Masia, home to legends like Lionel Messi, Andres Iniesta, Xavi Hernandez – is Barcelona’s youth academy that shapes promising footballers from a younger age.

“They [Real Madrid] buy superstars. We [Barcelona] make them!”

As Joan Laporta once infamously said. In the last few years, Barcelona has kept going further and further away from their once acclaimed transfer policy. The majority of the Bartomeu reign has seen ‘Galactico’ signings like Phillipe Coutinho (140M), who have ironically failed. There is no trust in La Masia stars, and that is exactly what Victor Font pledges to change. He believes that is the La Masia players who know the Barcelona model by heart and they are the ones who are better positioned to lead Barca’s future sporting project.

Every Culés’ dream. Xavi Hernandez, the next in line after Pep Guardiola and Johan Cruyff, returning back to Barcelona one day as manager. Well, that day could be here soon. Xavi has begun his managerial career at Al Sadd, and he might not be super far away from the Barcelona job. Xavi claims that he requires at least 2 years of experience before taking the reigns at Barcelona, perfectly alligned with when Victor Font will go into power (if elected)

“I hope Xavi leads our footballing project at Barcelona”

Font is a big admirer of Xavi, and is beyond convinced that he is the right man to lead Barcelona to glory. He knows that Xavi is well aware of Barcelona’s ways and his ideologies will emulate those of Cruyff, if not improve them. Xavi too reciprocates the praises.

On the Catalunya Radio show, ‘El Club de la Mitjanit’, Xavi said, ‘I think he [Font] is well prepared and a good candidate. The socios would do well to keep him in mind in the next elections. I think he’s a very suitable person to lead the ship, this transatlantic that I would say Barça is.”

Xavi has already started his journey to becoming the manager of Barcelona, and it’s a question of ‘if’ but of ‘when’. Xavi and Font at the helm of the Club, can and will most likely lead Barcelona to glory.

Font believes in the use of a software (already programmed and delivered to the Club), which will enable the election of a new president through electronic voting in 2021.

“It is a key tool in the transformation of the management model we promote. It does not make any sense that a club like Barça with 140,000 owners and always linked to democracy should not take into account their opinion except when voting in elections every six years.”

Sí al futur intends to apply the electronic vote in many places. Of course, the elections to the presidency, but also in some symbolic issues, such as the design of the jersey and the badge. Font states that “the commitment to electronic voting does not mean that the board of directors does not govern, but rather that it will listen to the opinion of the Club members (Socis) before making certain decisions”.

Font’s insistence on using electronic vote is in order to allow more people to voice their opinions and to find out what Barça members really want.

One of the most important changes Font wishes to implement – a completely new and revamped governance model. Font is proposing governance that is based on an advisory board formed of specialists.

“It is no longer sufficient for a large endowment to be managed among a group of friends and acquaintances, instead we need to constuct an advisory board that is replete with competent individuals who are skilled and have experience in the sporting industry”

Font’s idea is to have a separate board of advisors, consisting of the Barcelona members, who advise, suggest and give their opinions on different situations so that the club can formulate good solutions for different issues. This is opposed to the current, traditional model where the Barcelona board makes all the key decisions without any input from the Barcelona members.

The concept is a voting system that would focus on the key decisions for the club and not merely on day-to-day activities.

Font’s goal is to allow the Barcelona members to be heavily involved in the important decisions of the club.

Probably the most innovtive idea Font has.

“No one has the magic formula… yet”

In the summer of 2018, Antoine Griezmann rejected a move to Barcelona, and Gerard Pique made a documentary on it. Font thought that it was an extremely creative idea.

Font feels Barca have wasted the “best-ever generation of footballers” by failing to lead the way with similar, insightful content during the last decade.

Font believes that content is extremely powerful, and creative, innovative and imaginative content can be used to generate a lot of revenue for the club.

“A club can make creative content, and then people around the world would be ready to pay €5 per year, on a subscription-based model, for that exclusive content. It’s about being proactive, taking some initiative and seeing how you can benefit the club. This is the type of innovation which technology allows you to do. What has exponential growth potential is going directly to the consumer because you have 400 or 500 million fans around the world. If you sell €5 a year [to each of them], that’s €2.5 billion in revenue per year, only from the fans.”

So to sum up, Font’s masterplan is to continue using the traditional business model while also using Entertainment and Media, which are both extremely powerful, and game-changing tools.

Who better to lead the club, than the Barcelona legends who would die for the club. Font understands that – figures like Victor Valdes, Carles Puyol, Xavi Hernandez, etc. – are people who know Barcelona in and out, know what the fans demand, know the tradition and culture at the heart of the club. They are the people who truly care about the club, who want to see it succeed – not for their financial gain.

Life without Messi is going to be difficult, it’s going to be hard. The loss of the greatest player in football history, and arguably the most iconic – is going to hurt Barcelona in a sporting way, a political way and an economical way. On top of that, the club has been in a lot of debt recently due to the excessive amount of loans the current board has taken, so the financial stability of the club isn’t completely assured right now.

The post-Messi era is going to happen, it is inevitable. This will be the biggest challenge Barcelona will ever have to face – nobody knows what will happen, but Victor Font is most probably the best chance we have of getting through the change and setting up a new dynasty, maybe a better one.