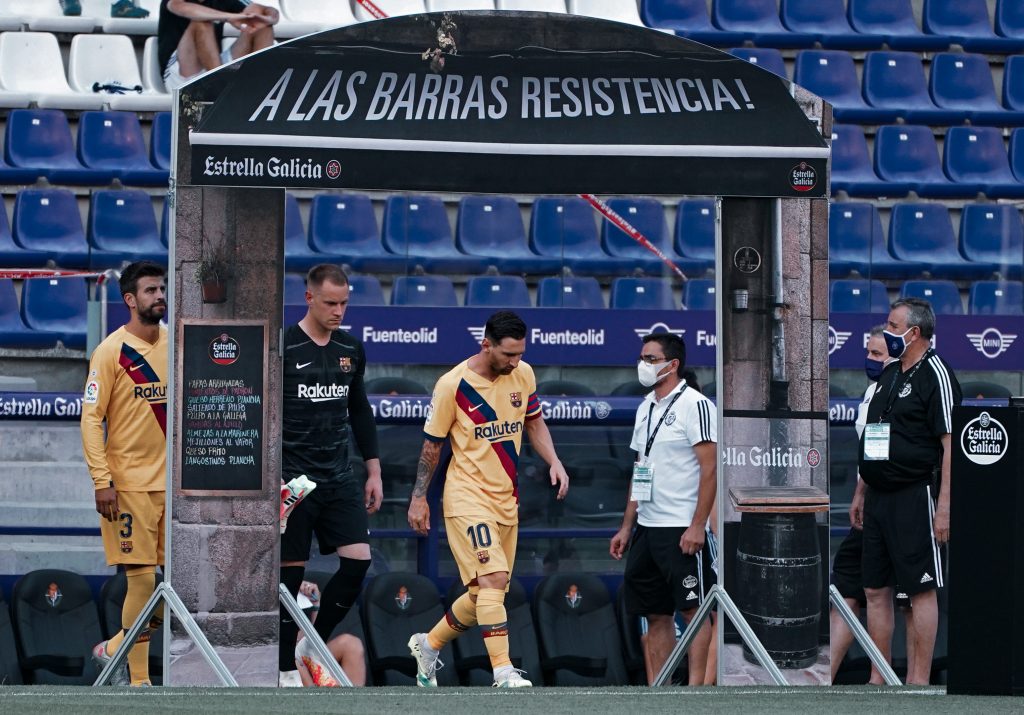 Good first half, disappointing second, but three points in the end. These are the ratings for each Barcelona player in Saturday’s 0–1 victory against Real Valladolid.

At the Estadio José Zorrilla on Saturday, Barça, not for the first time this season, devalued a promising first half performance by completely losing the plot after proceedings. Despite looking to trouble Real Valladolid on countless occasions, Barcelona’s dominance was woefully short-lived. While the players looked comfortable operating in a relatively new system, tiring legs and fatigue got the better of them. Here’s how the players fared in an uninspiring 0–1 away victory over Real Valladolid.

Simply salient in goal, Marc-André ter Stegen produced an impeccable performance, especially in the second half where he made a couple of great saves against headers by Enes Ünal. Along with maintaining his composure between the sticks, he was also exceedingly confident in jumping up and claiming the threatening barrage of crosses from Valladolid.

Gerard Piqué had a tremendous 90 minutes as he continued asserting his dominance at the back. While lack of rest for the ageing veteran has been a subject of great concern, his positioning was spot on and he always looked comfortable while clearing the ball. Piqué’s ability to win aerial duels was pivotal to preventing Sergio González’s side from scoring.

“It is normal to notice fatigue on some players like Piqué, but he showed his quality today”

A mistake from Clément Lenglet resulted in Kike Pérez finding himself through on goal, along with that he picked up an unnecessary yellow. Lenglet also frequently struggled against the flurry of crosses from Valladolid. The French international is certainly capable of better performances, and eventually, he came off for Ronald Araújo after proceedings.

Although he didn’t play in a very defensive role, Jordi Alba’s pressing in the first half allowed Barça to regain possession several times. He successfully kept Real Valladolid quiet on his flank, winning most of his ground duels and making a couple of decent interceptions.

Sergi Roberto continues proving doubters wrong as his versatility as a player was once again highlighted. Roberto’s workrate, in particular, was worthy of high praise. In the first half, he was forming a back three with Lenglet and Piqué, while also establishing triangles with Lionel Messi and Nélson Semedo in attack. His unblemished positioning prevented Barcelona from not getting excessively exposed at the back.

Nélson Semedo’s productivity up front was an unexpected, but wonderful, sight to behold. Manager Quique Setién deployed him as a wing-back, almost a winger, in a 3–5–2 formation, which allowed him to be highly active in the final third. The Portuguese was a constant threat moving forward, especially in the first half. He sent in some promising crosses and was unlucky to have Antoine Griezmann, at the end of one of his crosses, miss an absolute sitter. After being moved to a more defensive role, though, his influence decreased.

Sergio Busquets looked calm and collected in possession, but failed to have the usual impact. He didn’t offer much defensively and looked slightly worn out. Ultimately, he came off in the second half, which instead of bolstering the team’s gameplay, deprived the blaugranas of control in midfield.

Riqui Puig had a fantastic first half, where he proved to be a breath of fresh in Barcelona’s stale midfield. He was energetic, vibrant and always willing to make something happen on the ball. It was his sheer determination and activity that allowed Barça to be so imposing in the first 45 minutes, though, to the surprise of many, he came off after proceedings. His removal deteriorated the Catalans’ performance vastly.

A much-needed break against Espanyol bore Arturo Vidal fruit as he looked fresh and exuberant on the field. In spite of lacking technical polish, his pressing in the first half was advantageous to Barça’s gameplay. In addition, he was awarded with a goal after he struck an extremely clinical strike to beat Jordi Masip guarding the sticks.

It was an underwhelming display for Antoine Griezmann, who wasn’t even provided the opportunity to complete an hour on the pitch. The Frenchman struggled to operate as a pure number 9 and made matters worse for himself by missing out on a glorious chance made by Semedo. While Antoine couldn’t replicate the same performance he had against Villarreal or Espanyol, he was fairly influential on the ball and not a hassle to his teammates.

By no means Lionel Messi’s most pleasing performance to the eye, but he was, once again, a ray of hope for Barça in attack. He linked up well with those surrounding him and had a few moments of sheer magic. In addition, Leo earned his 20th assist in La Liga, equalling Xavi Hernández’s record of most assists in a season. Although Messi may be hungry to break some records in the remaining games, he requires rest more than ever.

Notwithstanding Griezmann had a fairly poor evening, Luis Suárez was a massive downgrade as he displayed one of his most appalling performances this campaign. The Uruguayan was ineffective in possession, a liability off the ball and a burden for his teammates.

“Suárez being on the bench in the first place has been due to the accumulation of minutes, he needed a break“

After replacing Riqui Puig in the second half, Iván Rakitić struggled to replicate the same kind of energy and commitment shown from the young Catalan. He added very little to Barcelona’s colourless midfield and displayed little intention to create plays.