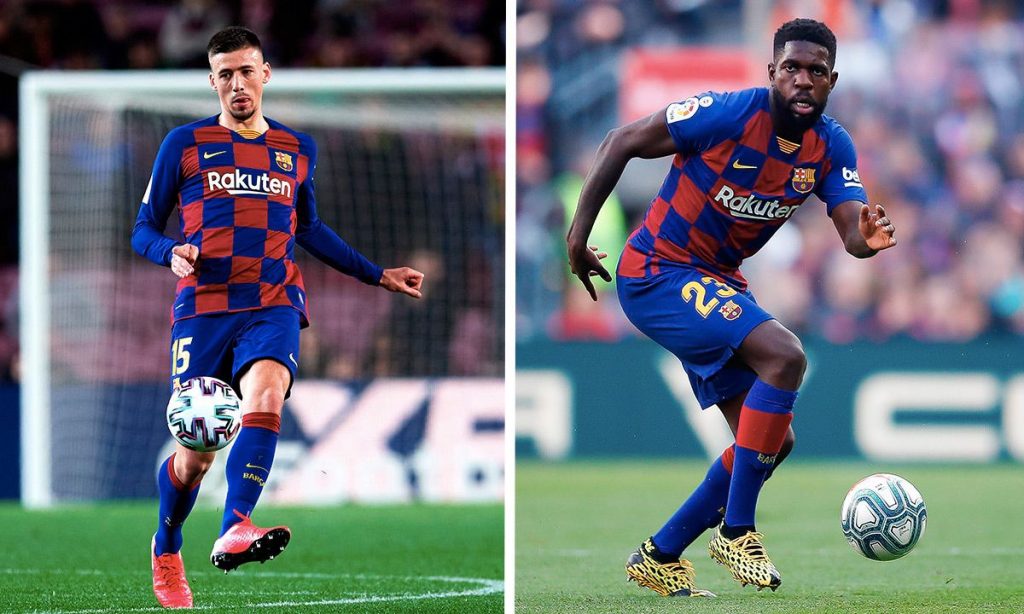 Samuel Umtiti has started 6 of the 9 LaLiga and Champions League fixtures under new manager Quique Setién. Early in his tenure, the Cantabrain has preferred Samuel over his French compatriot, Lenglet. With many culés vocal in their criticisms of Umtiti over the past two seasons, the question becomes – why has he been preferred by Setién?

The short answer is – Umtiti’s profile is better suited for Quique’s tactics. What we must consider is how Setién’s team has defended. Under Setién, Barça have opted to defend by keeping control of the ball, and pressing intensely when they lose it. Their pressing scheme is predicated on using partial man-marking to force the opposition to play long passes.

We see Barcelona’s use of partial man-marking here. In the scenario above, Carvajal is cornered and forced to play a long pass. This is where Umtiti’s skillset becomes crucial.

As the pass finds Benzema, Umtiti immediately steps into midfield to press him. This is crucial to Setién’s tactics, as even when unsuccessful, it delays the play long enough for his teammates high up-field to recover their position. In short, not only does Umtiti’s presence increase the effectiveness of the high-press tactic, it also delays potential counter-attacks and allows Barcelona to recover their defensive positions.

A basic look at their pressing profile under Setién demonstrates that Umtiti is more capable than Lenglet at performing this type of action. Although they have similar attempted pres1sures per 90, Umtiti presses significantly more often in the middle third, and has a better success rate.

It should therefore be no surprise that in the LaLiga games Umtiti has started for Setién, our pressing has been significantly more intense that in the games he hasn’t. This is incredible considering that he started against Real Madrid, where the team recorded its worst PPDA (11.8)

Samuel’s success rate in pressing situations isn’t isolated to the matches under Setién. Umtiti has recorded a better success rate than Lenglet in each of the last 3 seasons.

Of course this type of action is only fruitful if Umtiti’s teammates match his intensity, and the pressing scheme is sufficiently compact. Here we see an example where the lack of intensity and compactness results in a dangerous counter-attack for Real Madrid.

Umtiti steps forward to pressure the ball carrier, Valverde. His pressing forces Valverde to play the ball wide. This, in theory, is a pressing trap that intends to suffocate the meringues by boxing them down the touchline. However, given the lack of intensity and compactness by Umtiti’s teammates, this pressing trap is easily dealt with.

We see this here as Valverde and Isco use a simple ‘1-2’ to deal with Umtiti’s pressure. Replicating this scenario under a more intense and compact scheme by Barça yields a more favorable situation.

Therefore it is obvious that Umtiti’s value over Lenglet is heavily dependent on the pressing scheme employed.

With all that said, pressures in the middle 3rd are not the only requirement in Setién’s pressing schemes. The ability to win aerial balls and disrupt the passing lanes are likewise extremely important. The numbers indicate that Umtiti is better in these regards as well however.

For these reasons, it is perhaps prudent for Barcelona, and their fans, to reassess their stance on Umtiti. Yes, he is not the brilliant center-back he was back in 17/18, and his injury problems are a major cause for concern, but his profile is extremely important for Setién’s tactics.

Indeed if Barcelona do move on from the Frenchmen, it is imperative they invest in a center-back with a similar profile. Someone who is strong, quick, good in the air, and on the ball. However, given the club’s financial situation, and their apparent prioritization of other positions/targets, finding such a center-back does not look likely. Consequently, losing Umtiti represents a significant risk for Setién.