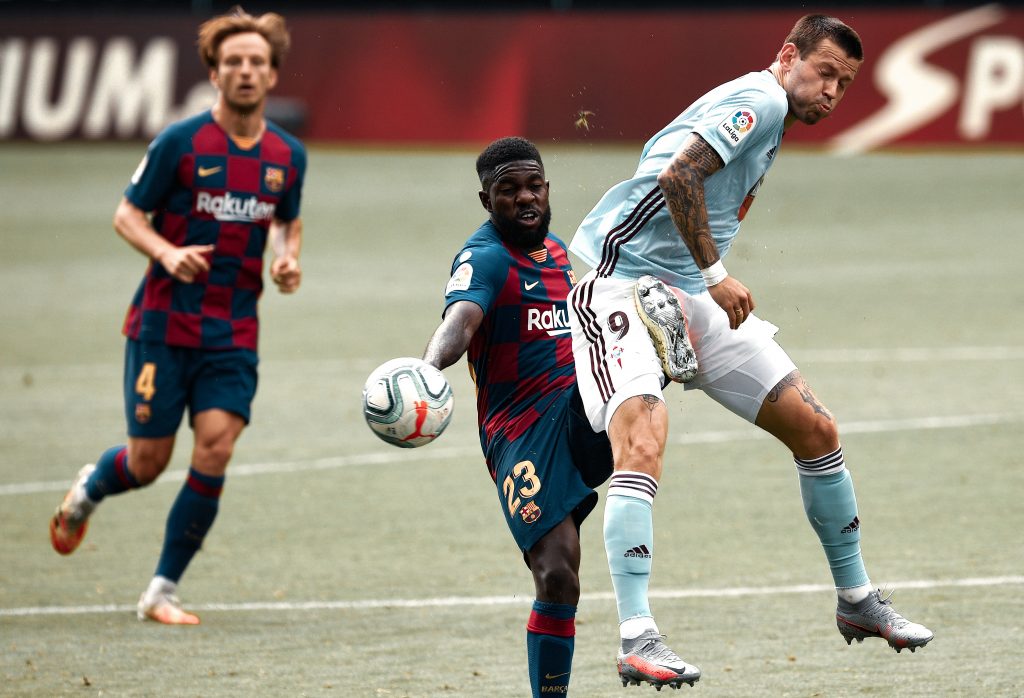 Samuel Umtiti arrived to Barcelona in 2016, offering privileged physical and tactical conditions. But an injury a couple of years ago changed his life. Still, fans hoped to see Big Sam shine again. Yet time passes, and that faith in the player disappears. Yesterday, against Celta de Vigo, Umtiti could have signed his potential departure from Barça.

Samuel Umtiti. That physical, reliable and solid defender who avoided countless times that the rivals scored a goal. That French beast that culés considered as their new Carles Puyol, and the next partner of Gerard Piqué. A centre-back who, from the first day, fans fell in love with, since, for his characteristics and security, he was entertaining to watch. However, a knee injury that sidelined him for 28 games in the 2018/19 season forced Umtiti to undergo a treatment.

After such treatment, Big Sam looked the same physically, but, when he was on the pitch, there was no trace of the old Samuel. Sure, there were games in which he did well, but there was no consistency or confidence to consider Umtiti reliable for the important clashes. Still, supporters continued to believe in him, having faith that the talent of a few years earlier was going to regain his level. Unfortunately, a long time has passed and we continue without response.

Since the return of La Liga, Umtiti had not made his debut yet, as the staff was not entirely sure of his fitness after suffering a slight injury during the break. Notwithstanding, the 26-year-old was in charge of defending the blaugranas‘ shirt against Celta de Vigo on Saturday, a game with a high level of demands and pressure since the league title was at stake. As expected, Samuel did not fulfil his duties and ended up being one of the main culprits of that draw, especially for the local’s first goal. A disappointing game, but one that could definitely change the footballer’s future.

With just 18 games played this season, four of which came from the bench, it is clear that Umtiti has dramatically gone from being in the foreground to being a secondary option. He has only been part in 33% of matches. In addition, most of the teams that Sam has faced have been from the lower half of the table. Almost never against top La Liga sides. And, despite extreme measures with little rest after the pandemic break, Umtiti is also not an active part of the rotations, especially given the importance behind each matchday.

Moreover, with Clément Lenglet in the team, it is even more difficult for Umtiti to develop his confidence since his compatriot is an essential man for the defensive approach of manager Quique Setién. Although Samuel offers different things to Barça’s game, Lenglet is a safer bet. Clément is a physically healthy player, very unlikely to be injured, usually focused through the full 90 minutes, and working well under pressure. While Lenglet has all these features at the fullest, Umtiti has lost all of them.

After having lost the top spot of La Liga against Sevilla, Barcelona faced a Celta de Vigo that had been playing fabulously at the hands of Rafinha Alcântara, Denis Suárez, Iago Aspas and obviously coach Óscar García. Furthermore, the match was held at Balaídos, a stadium where the blaugranas had had many difficulties in recent years. To everyone’s surprise, Quique Setién trusted Samuel Umtiti for this match against Celta. A duel in which the Frenchman certainly didn’t cover himself in glory.

Umtiti was out of position in the majority of Celta’s attacks, leaving a lot of space behind, pressing up when he shouldn’t, and lacking concentration. Celta de Vigo had multiple chances of danger for the simple fact of having Umtiti on the defensive line of Barça. Sam did not add, but subtracted.

Umtiti’s disappointing display gave extra work to Gerard Piqué, who did a great job in supporting his teammate when he made a mistake. However, there was an error that neither Gerard nor Marc-André ter Stegen could save. In the action of Celta’s first equaliser, Samuel wanted to anticipate and move forward when he left Okay Yokuşlu run behind him, leaving Piqué alone in defence against two attackers. As a consequence, Fyodor Smolov was able to open the scoring for the celestes.

And this did not end there. He kept making similar mistakes throughout the match. Fortunately, the resulting errors were fixable. Additionally, against an opponent like Celta and with so much at stake, these mistakes by Umtiti were unforgivable for a club as professional and demanding as Barcelona. Having rested in the previous game, he should have been an asset in rotations, but he was not. Umtiti was a liability that unbalanced the approach of Barça against Celta.

Is it time to say goodbye to Big Sam?

Samuel Umtiti’s first season at Barcelona was unbelievable. Full of physical power, and with the joy of seeing how rivals battled and struggled to beat him. It really was like having a defensive wall. You could see the faces of the attackers when they had to overcome Big Sam in a one-versus-one, in a counter-attack or in a build-up. They couldn’t be calm the day before knowing that on the following day they were going to face Umtiti.

Unfortunately, the years go by, players come, players leave and others lower their performance. The case of Umtiti belongs to the latter. The worst thing is that he surely tries hard, but a physical issue such as his dramatic knee injury forced him to make a 180° turn in his career. Undoubtedly a depressing situation, as culés will end up sad to see what it was to once watch the iconic Carles Puyol in the body of a Frenchman that finished being a set of poor performances.

After two seasons full of bad moments, at Balaídos it was time to realise, or rather confirm, that there is no turning back. We can assure the faith to get Umtiti back is over. With the return of Jean-Clair Todibo, the good displays of the young Ronald Araújo, and the irreplaceable Piqué and Lenglet, Umtiti would not only have fewer minutes, but would practically not be considered.

Now, what should Barcelona do? Selling Umtiti sounds like the most logical option. In 2018, before his injury and in his prime years aged 25, Barça received multiple offers for him, whose release clause was of 60 million euros. A fair price. However, currently, his market value is half of what it was two years ago, if not less. Of course, there is a lot of difference but, given the circumstances, it would not be wrong to sell him for that price. The problem is that no club may be willing to pay such high fee and wages.

For Samuel Umtiti, all that remains is to continue working and giving his all to recover his level. To keep smiling as on the day of his presentation, where he started spreading his happiness to the entire Barça entity. It hurts everyone to see his current situation, but for both the footballer and the club, the best thing for him is to finish his spell in Catalonia.