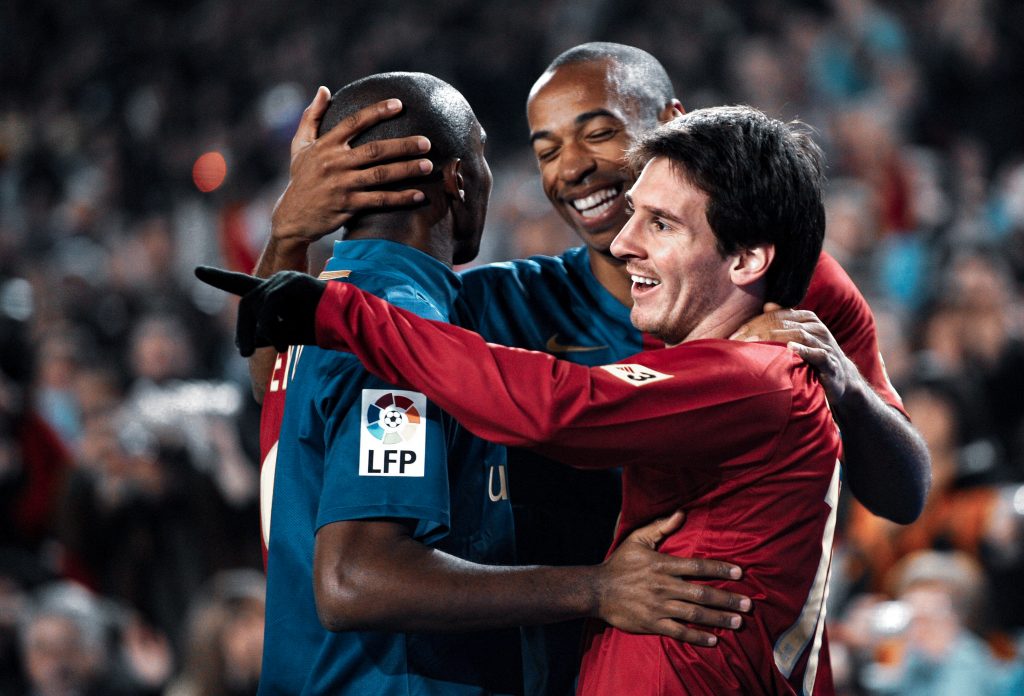 Header Image by PanoramiC via Imago

After MSN and MVP, it’s time to count the story of the trio that started Barça’s arc of dominance: Messi, Henry and Eto’o.

Football is proof that legends never die. Throughout history, players and managers that have entered the hall of fame always stayed in people’s minds, dead or alive. For example, Johan Cruyff passed away four years ago on the 24th of March, but his ideologies are still well and truly alive to this day. The magic Dutchman played in the 70s and managed in the 90s, but he is still relevant and regarded as the father of modern football. Johan’s Dream Team consisted of three attackers, and Barcelona are still attached to this vision of football to this day. While Hristo Stoichkov, Romário and Laudrup left long ago, other superstars have emerged and flourished in the system Barcelona employs.

One of the first systems Pep Guardiola, a disciple of Cruyff, utilised at Barça was formed by three of the game’s best legends. The first one was a young Leo Messi, still searching for consistency even though he was one of the brightest prospects in the world at the time. Messi, while impressing, had several injury problems in his early career and that correlated with his poor diet. However, when Pep coached the Argentine, he changed him entirely, and the then-youngster’s professionalism improved drastically.

The second one was Thierry Henry. After flopping at Juventus, Henry came back from the dead at Highbury and under Arsène Wenger, a man who taught him a lot while together. Henry was one of the Premier League’s top scorers, one of Arsenal’s most influential players ever and an invincible before joining the Catalans in 2008, two years after losing the Champions League final against them. Under Guardiola, Thierry adapted to the left wing spot, a position he had not played much at Arsenal, and he found success making way for the next player.

❛ When he arrived, I reminded Guardiola that he’d never been a great player. I told him in no uncertain terms that Eto’o was the one who would make him win ❜

Samuel Eto’o is one of Barcelona’s best-ever strikers. Way before the Luis Suárez’s days, the Cameroonian scored left, right and centre for the blaugranas, making every culé forget his Los Blancos past. When Pep joined, however, the two men did not get along on the slightest. In an interview for Bein Sports France, the man who won two trebles in a row was ruthless when talking about Pep, saying that the Catalan did not treat him right and even went through Samuel’s friends to talk to him, while he only approached Eto’o to speak with Yaya Touré.

❛ I did a lot for the club. Guardiola was unlucky enough to have to play me for twenty minutes against Chivas and I scored three goals. From then on, he never had the courage to say things to my face. I didn’t want to talk to him until he apologised to me ❜

In the only season the trio of Messi, Henry and Eto’o were together, they absolutely demolished every rival in front of them. While Pep’s first few two league games were winless, he could count on those three superstars to change a game when needed, and results began to show as the season went by, much like MSN and their slow start. Moreover, Eto’o’s astronomical numbers propelled Barcelona to an unprecedented treble, in which they destroyed everyone.

❛ I told him ten times, and explained it to him at length. Pep wanted to give me lessons on how to be a striker when he was a midfielder. I said to him, ‘You’re not normal, are you?’ The true story is that Pep never respected these things in the world of football ❜

The African Ballon d’Or scored 36 goals and opened the scoring in Rome against Manchester United to show the way to his teammates. The forward then found himself in Melan, being part of a swap deal for Zlatan Ibrahimović’s shambolic transfer to the Camp Nou, as Eto’o won a second consecutive treble at Inter and defied the odds to become the only player to achieve that feat to this day.

Messi and Henry also contributed heavily to the success of Guardiola’s first campaign. As mentioned, Thierry was in the manager’s good books thanks to his selflessness, and he was one of the focal points in that course, netting 26 times in all competitions and assisting his teammates on 11 occasions. Truly astronomical statistics from a legendary attacker. That season also meant Pedro Rodríguez broke through and the La Masía graduate was part of another trio that won a lot in 2011, with his emergence meaning that Thierry Henry would be sold in 2010.

However, an essential part of the 2008/09 term was, obviously, Leo Messi, who finally fulfilled his potential. Before Pep, the number 10 didn’t have the best mentors, and while his potential was evident, as Ronaldinho and everyone that played with him said, something was missing when the golden boy was playing, as if he lacked something. When Guardiola first set foot at Camp Nou, his first decision was to make La Pulga a focal point of the team because of his undeniable ability. The then-20-year-old showed his class, outscoring Samuel Eto’o with his 38 goals, an unbelievable feat at the time, and providing 18 assists in total. Messi became the best player in the squad and finally found consistency at a vital moment of his trajectory. He won the Ballon d’Or following his header against United in Rome to double the lead in the 2009 final, or his complete performance away at the Bernabéu which saw his side humiliate Madrid by six goals to two exactly 11 years ago.

❛ The first day he entered the dressing room, I didn’t dare look at his face. I knew everything he had done in England. I had a picture of him made and suddenly we were on the same team ❜

Pep’s first campaign as a head coach was genuinely mesmerising, and he couldn’t have done it without his front three, who always gave their all for the squad and were classy from start to finish. That trio is deeply anchored in the history of FC Barcelona because they changed the scenery for years to come. Before Pep and that trio was assembled, Juan Román Riquelme’s Villarreal finished ahead of Barça by an unbelievable margin. But then the azulgranas rose again, and their current gigantic status comes from the recent trebles that began with Messi, Henry and Eto’o, surely some of the biggest names in the Barcelona folklore.