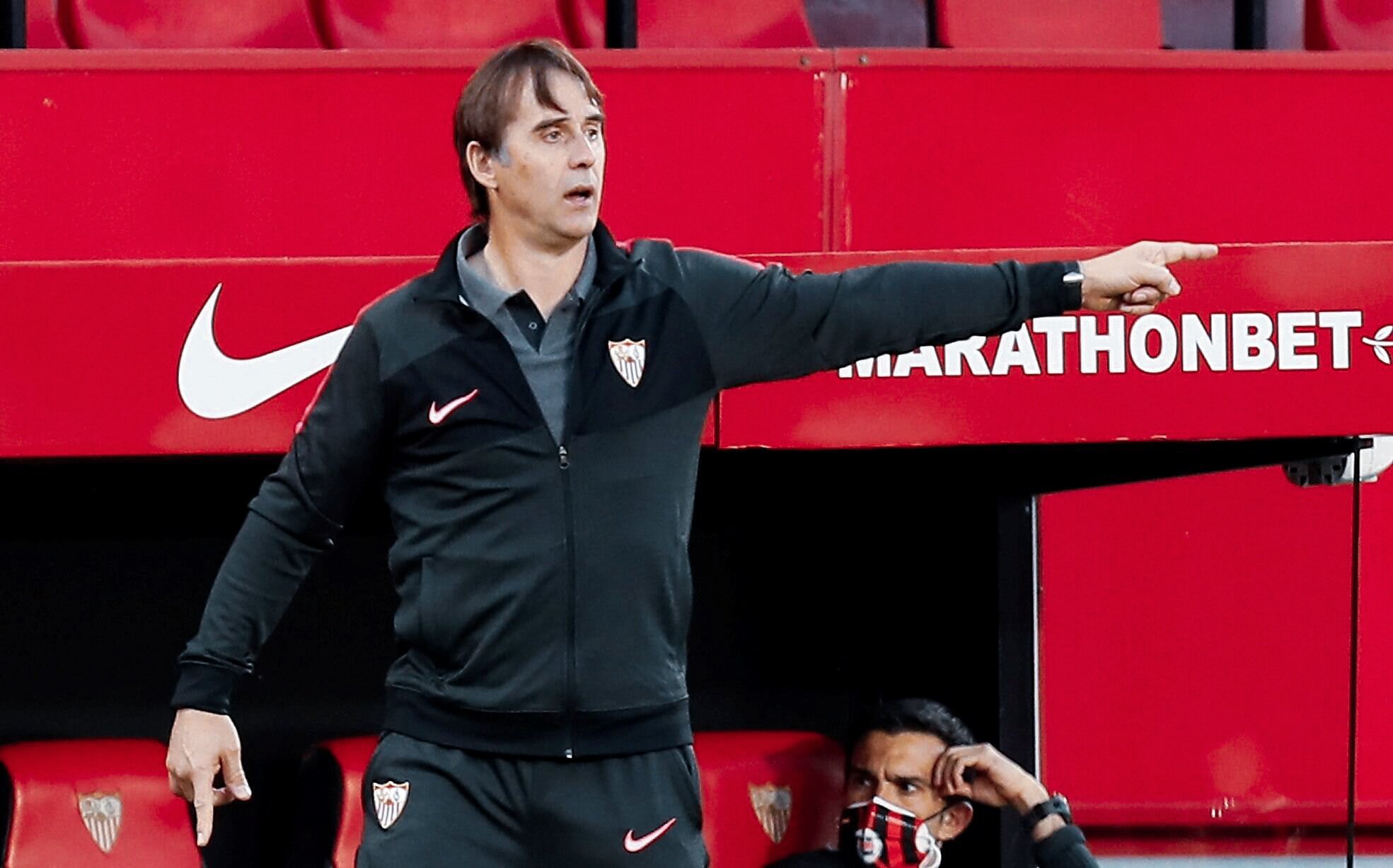 As Arturo Vidal’s header went in, the dismay on Julen Lopetegui’s face was apparent. The scoreboard read 5-1, and not surprisingly, the experienced Spanish manager was on the verge of being fired from his dream job with Real Madrid. Not too long ago, he was involved in a short-lived fiasco with the Spanish national team.

Real Madrid announced Lopetegui’s arrival right before the commencement of the world cup, which led to La Rojas removing Lopetegui from the helm just a day before the 2018 World Cup. It seemed like Lopetegui’s Madrid reign was destined for chaos, and from there on – it was only a matter of time before he was dismissed by Los Blancos as well.

Therefore, it was obvious that a break from football was a welcome one for him. After almost 9 months away from football, Sevilla approached the outcast manager to take over the reins in Andalusia. Not long ago, they had re-appointed popular figure Monchi as the sporting director. It was clear right then that the Seville side was moving in an upwards trajectory since then.

Lopetegui’s arrival led to an instant change in playing style. Los Nervionenses instantly looked to press higher, win the ball up in the opposition third and keep the ball for longer periods. New signings Lucas Ocampos, Jules Kounde and Diego Carlos, made an immediate impact, quickly becoming key players in Lopetegui’s setup. Many doubted his credentials after his stint with Los Blancos. But Lopetegui was here to prove a point. Real Madrid’s loss would be a huge gain for Sevilla as they looked to give Spain’s big three a run for their money.

The Spaniard’s influence was seen straightaway at Sevilla. In his very first year, he led Sevilla to the Europa League. Granted, the side were perennial Europa League winners – but given the aftermath of dismal European campaigns under different managers in the post-Unai Emery era, this was a colossal achievement.

Next year, with key players like Ever Banega and Sergio Reguilon leaving the squad, Sevilla looked to be in a mini-transition season. Signings like Ivan Rakitic from Barcelona and Marcos Acuna from Sporting have made sure this hole was quickly filled. With Monchi as the sporting director, it is made sure that Lopetegui gets the player profile he desires, which is paramount to their success. It is with these signings that the ex-Los Blancos manager can implement his system successfully.

Under Lopetegui, Sevilla has stuck to a solid 4-3-3 to enable a possession-based approach. The defence is a combination of experience and youth, with youngsters like Kounde in central defence as key as experienced warhorses like Jesus Navas at right-back. Moreover, the signing of Yassine Bonou from Girona has proved to be key as he has been one of the standout goalkeepers of the season.

Combining all these pieces has led to Sevilla becoming one of the most defensively solid sides this season, with only current leaders Atletico Madrid and Zinedine Zidane’s Real Madrid conceding fewer than their 26. One of Sevilla’s biggest qualities is their set-piece defending. Diego Carlos, Jules Kounde and de Jong are great headers and have height on their side. This same height also helps them defend effectively.

The key to efficiency in Lopetegui’s side is their wingbacks, especially Navas, who looks to push forward and wide, creating havoc on the right. This often leads space behind them, and that space is often covered by the centre-backs Kounde and Carlos. The holding midfielder Fernando drops in between them to cover the space, essentially making the formation 3-4-3 at times. Not unlike Barcelona under Guardiola, where the midfield trio saw Sergio Busquets played the role of the holding midfielder with Alves and Abidal pushing wide.

Given the technical ability present in the squad with players like Joan Jordan, Ivan Rakitic and Jesus Navas, Sevilla look to dominate possession and press high, relying very less on counter-attacks. Moreover, Lopetegui’s side is fluid in their movement, and the players are flexible in their roles.

This enables them to keep the ball effectively in a variety of formations throughout the match. It reflects in the statistics as well, as Sevilla keep an average of 61.3% possession, which is second only to Ronald Koeman’s Barcelona in La Liga. The Seville side manage 470 accurate passes on an average per match, which is third behind Barcelona and Real Madrid.

Sevilla always look to build out from the back, and in such scenarios the holding midfielder becomes key. The midfielders in the Sevilla team are often rotated, with Joan Jordan, Oliver Torres, and Ivan Rakitic all playing key roles. The midfield combination is a standard creator-destroyer-carrier trio, with Fernando usually playing the role of the destroyer, Jordan or Torres the creator and Rakitic the carrier.

Rakitic has effectively filled the hole left by Ever Banega’s transfer to Al Shabab. The Croatian plays a huge role for Lopetegui’s side, acting as the link between midfield and attack; he ensures that the midfield, fullbacks and attackers connect effectively.

When Sevilla do lose the ball, they look to recover it high up the pitch. When the opposition goes beyond their first press, Fernando looks to recover the ball quickly and effectively, acting as an effective ball winner. With clear cut roles assigned to each midfielder, the midfield trio has become one of the most effective in La Liga.

Lopetegui’s side in attack presents a different problem for defenders depending on the lineup. In Luuk de Jong and Youssef En Nesyri, he has two very different strikers at his disposal, both of whom can be effective depending on the opposition. de Jong plays the role of a target man, presenting a tall figure in the box who can head in the crosses and can link up effectively after receiving the ball. His lack of pace is covered by the wingers in Lucas Ocampos and Suso.

The wingers at Sevilla play different roles. Both the right and left-sided wingers are pacey and offer a scoring threat, but Suso and Ocampos are very different. Suso often comes inside and acts as a 10 while Ocampos pushes forward, creating a temporary 4-4-2 diamond formation, with the fullbacks presenting the width. New signing Alejandro Gomez presents a similar creative threat to Suso, and once he does get going, one would expect him to play a key role as well.

En Nesyri, on the other hand, presents a separate problem to the opponents. He poses a dribbling and finishing threat more than that of a target man. He is pacier and helps with quicker transitions. His finishing is much more efficient, clear by his scoring prowess in the league— with 17 goals. He is fifth-best in La Liga, only behind stalwarts like Lionel Messi, Karim Benzema, Luis Suarez and Gerard Moreno. Last season, Sevilla lacked forwards who could act as runners behind the opposition defence, and en Nesyri this season has made sure no such emptiness is felt.

Los Nervionenses often rely heavily on their fullbacks to attack, especially Jesus Navas. As Suso drifts in, the ball often reaches the Seville side’s captain on the right-wing, whose crosses are pretty lethal. Munir and Ocampos on the left are very similar. Both Munir and Ocampos, although left-wingers on paper, look to drift inside and support their striker and look to present a scoring threat in the box. The strikers combined with the left-winger look to be the target of Navas’s accurate crosses.

After a slow start to the season, Lopetegui’s men quickly caught up and currently stand only three points behind leaders Atletico Madrid. While La Liga fans discuss the possibility of one of Atletico Madrid, Real Madrid or Barcelona winning the title once more, Sevilla stand firmly close to the three as dark horses. There was a large gap between Spain’s big three and the rest of La Liga in previous seasons, but Lopetegui’s Sevilla has quickly eaten up this space.

With all three of the serial contenders seeing inconsistent results, the title race is not a foregone conclusion at the moment. It is not unfair to say Sevilla are in contention for the throne, and yet little is spoken about them. With a match against Real Madrid coming up soon as Atletico Madrid face Barcelona on the same weekend, there is an excellent opportunity for Lopetegui’s men to challenge the hierarchy of La Liga.

Of course, major credit for this should go to Lopetegui. Outcast by the Spanish national team and the Galacticos, it seemed like his future was bleak. But yet, here he stands. It looks as though Lopetegui’s redemption story is only in its initial chapters with Sevilla. The only question is if the story involves toppling the three titans of Spain— a prospect that no longer seems too far-fetched.