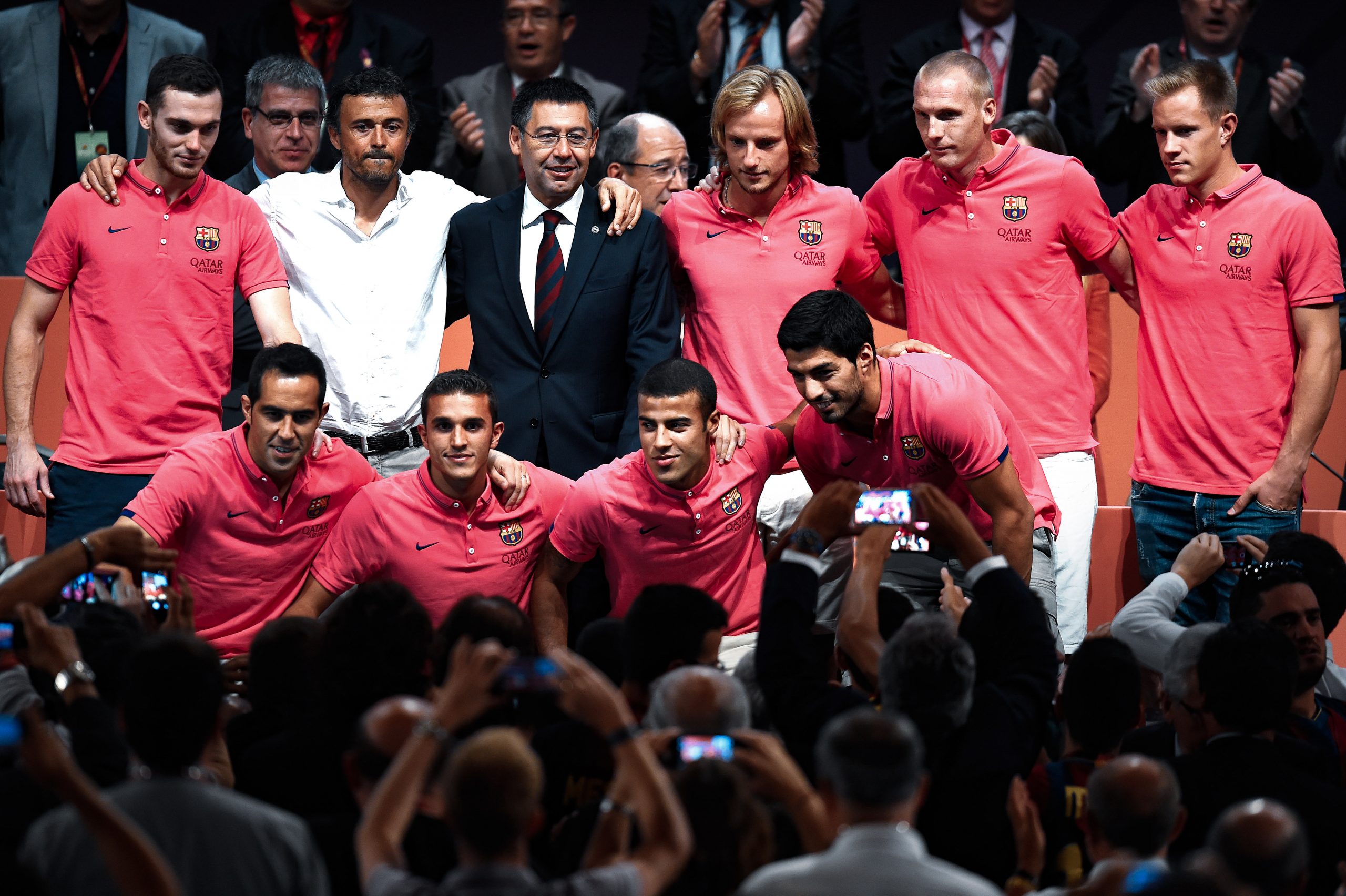 It finally happened. After months of infighting that created an internal crisis, the likes of which have not been seen in the footballing world for quite some at a club the size of Futbol Club Barcelona, something had to give. The easy solution was for the disgraced president to wilt and do the right thing finally.

After all, things had reached such a point that arguably the best player in the history of the game agitated to leave the club, his home, before eventually staying put at Camp Nou. The instability created on all fronts clearly had its effects on the performances of the team on the field as well, as Barcelona endured an embarrassing 2019/20 campaign.

The days and weeks following that explosive interview by Lionel Messi have been dominated by talks clamouring for the heads of the non-performing board and its seemingly incompetent president. And so, the inevitable happened at long last this week as Josep Maria Bartomeu finally put in his papers, in what was one of his best decisions at the head of the club.

During his near-seven-year stint as the Barcelona president, the Blaugrana enjoyed a reasonable amount of success on the domestic front, while yearning for glory in Europe since winning the treble half-a-decade ago. In this period, the club signed nearly three dozen players.

There are a few, however, who stand out clearly from the rest of the field. That is something that we now seek to ascertain and so, here is our presentation of the five best signings that Barcelona made during the reign of Bartomeu.

Note: The rankings are in no particular order.

This one is a no-brainer, really. But back when Suarez arrived at Camp Nou, his signing was greeted with a hint of scepticism even though he was one of the best players in the world at the time. After all, despite all his talent and undoubted quality, his bad-boy reputation preceded him, particularly after a controversial summer that saw him receive a lengthy ban from football for using his chompers on Giorgio Chiellini.

However, after he finally made his debut – in El Clasico no less – there was no looking back, scoring goals by the bagful while also having a keen eye for defence-splitting passes.

In his very first season at Barcelona, Suarez had a fantastic return of 25 goals and 20 assists, including a goal in the Champions League finals, playing a leading role in the treble-winning campaign after forging the formidable MSN trio with Lionel Messi and Neymar. That particular partnership will arguably go down as the best-attacking trio the footballing world has ever seen.

An icon, and an iconic photo. (Photo by ODD ANDERSEN/AFP via Getty Images)

After a memorable 2014/15 season, more titles followed as even more goals were plundered from the boots of Suarez, who would go on to win the European Golden Shoe and the Pichichi – the first player since 2009 not named Messi or Ronaldo to win both the trophies in the same year. Remarkably, Suarez was also perched atop the assists charts in 2015/16. Second season syndrome, anyone?

As the years progressed and the seasons passed him by, Suarez’s powers gradually started waning, and that gave way to him being subjected to a lot of criticism from the fans. However, Suarez still found a way to find the back of the net on a reasonably consistent basis. By the time his spell at the club came to an end this year, he had nearly breached the 200-goal barrier.

Taken in isolation that tally, which puts him at third in the club’s all-time top scorer list, is ridiculous, to say the least for a six-year stint. But he also had 113 assists to show for his efforts, leaving Barca with a staggering minutes per goal involvement ratio of 77.4. A bonafide legend who has etched his place in the annals of the club.

It’s the summer of 2014. Victor Valdes has called time on his long and illustrious spell at Barcelona, leaving the goalkeeping department in a state of transition. Along with Claudio Bravo, a certain Marc-Andre ter Stegen made his way to Camp Nou. Aged just 22 at the time, the German custodian was seen as one for the future, which was clear in the way he was eased into the role of being a regular.

In his first two seasons, ter Stegen featured primarily in the Champions League and Copa del Rey, with Bravo the preferred option in La Liga. But the Chilean was only a stop-gap till ter Stegen’s teething period ended, and the German did indeed grow in stature gradually before making the goalkeeping slot his own across competitions.

Ter Stegen’s gargantuan performances in the UCL in his first season were an important part of the treble. (Photo by Matthias Hangst/Bongarts/Getty Images)

Over the past four seasons, there have been no illusions as to who the undisputed first-choice between the sticks is. In fact, such has been ter Stegen’s impact between the sticks, that he is now inarguably the second most important player for Barcelona, having saved the blushes of the consistently inconsistent defence time and again.

His enormous wing-span has enabled him to pull off some mind-numbing saves while his prowess on the ball adds a layer to Barca’s build-up play. While he might not have an enviable clean sheet record, he has already made a mockery of his €12 million price tag.

Still at the peak of his powers, we might not have even seen the best of ter Stegen yet, which is quite a scary proposition considering everything he has already achieved. Do not be surprised if he goes down in history as the best goalkeeper that ever donned the Barcelona kit.

Another player who did not quite depart from Camp Nou on a happy and content note (do not be fooled by his wide smile at his final presentation). Another player who arrived in what was a fantastic 2014 summer transfer window for the Blaugrana, Rakitic was perhaps the most unheralded of the arrivals who ended up being regulars in the first-team.

However, following the departure of Cesc Fabregas, Barcelona did need a player who could be the ideal complement for Andres Iniesta, Sergio Busquets and Xavi. Rakitic was not a like-for-like replacement for Fabregas, but his qualities made him just the kind of player Barcelona needed to complete their midfield jigsaw puzzle.

A workhorse who was incredibly fit, Rakitic could be depended on to feature in every single game, if required. Indeed, in the six years that he spent at Barcelona, there was only one season in which he did not rake in over 50 appearances in the famous Blaugrana strip, that being the 2019/20 campaign. By then, Raki was already a shell of his best, and it was clear that his time at Camp Nou was up.

A moment etched down in every Culé’s mind. (Photo by Shaun Botterill/Getty Images)

In the five prior seasons, though, there was absolutely no displacing Rakitic from the middle of the park, with the Croat filling in whatever role his managers asked him to reprise. At the end of it all, the veteran midfielder, ever the team man, ended up amassing over 300 appearances making his €18 million fee look like quite the bargain. He had already repaid his fee with the opener in the UCL final, though.

Every so often, a prospect emerges at a club looking destined to reach the pinnacle of the game. If the said club is named Ajax, the chances are that the prodigious youngster will make it big in the game. That was exactly the case with Frenkie de Jong, who looked like a million bucks and played like so too right from the nascent stages of his career.

Exuding calmness and maturity beyond his years, de Jong initially filled in as a centre-back at Ajax despite being a midfielder. However, such is his quality that the young Dutchman excelled at the heart of the defence in 2017/18 just as he would at the base of midfield in 2018/19.

It is in the second of the two aforementioned seasons when his true qualities would emerge for the world to see, as he went on to win the Best Player in the League award for the said season.

Not long before Barcelona came calling for FDJ after his spectacular season. (Photo by Eric Alonso/Getty Images)

Soon enough, Barcelona were linked with the promising midfielder, and they took little time to get him on-board at Camp Nou. Now into his second season at the club, the revolving door of managers has hindered him from performing to his full potential. However, when he does shine, he tends to glisten like a diamond.

Quite clearly the heir apparent to Sergio Busquets, de Jong seems to be slowly growing into the role after being played in all sorts of positions in midfield last season. Now a mainstay in the middle of the park and with the potential to one day become the best midfielder in the world (he is already showing some of the traits), de Jong might not be a player who has paid off instantly.

But, barring an unforeseen downward spiral, his growth trajectory suggests the young man from Gorinchem is going to be a player Barcelona will look up to for the best part of the coming decade.

Much like de Jong, Clement Lenglet is a player whose best years are well ahead of him. However, after seamlessly slotting into the Barcelona defence, it is clear that Lenglet is here to stay and here to stay for a long, long time. Sure, the Frenchman has room for improvement in his game, particularly when trying to build-up play from the back.

However, his reading of the game has been spot on more often than not; the 25-year-old is rarely found wanting for pace, and he has the maturity to eventually take on the mantle of being Barcelona’s leader at the back when Gerard Pique is done at the club.

So impressive has Lenglet been in settling into the first-team setup that you would not know that he was originally brought in to be backup to compatriot Samuel Umtiti. Umtiti, though, is nowhere to be seen now, with injury after devastating injury rendering him to become an afterthought. As for Lenglet, he has gone from being backup to one of the ever-present players for Barca.

Lenglet has been consistently solid in the heart of the defence for Barça. (Photo by Josep LAGO / AFP)

His €35 million fee does not like a major outlay from Barcelona, and if he can continue adding layers to his game, there is no limit to what Lenglet can achieve this decade. For all intents and purposes, another player who can and should pay off handsomely for his investment in the time that he remains at Camp Nou.

All statistics from Transfermarkt