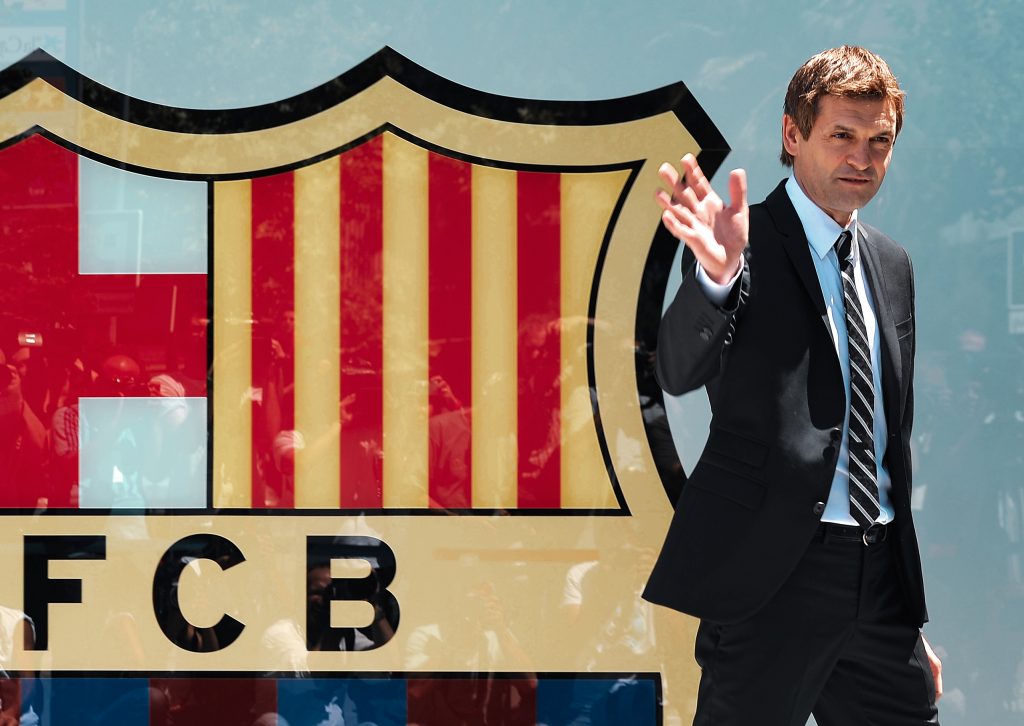 Born on 17 September 1968 in the small Catalan town of Bellcaire d’Empordà, a young boy fantasised with conquering the world. Francesc Tito Vilanova, like many other kids locally, dreamed with playing and succeeding at FC Barcelona. The difference is that Tito was one of the few privileged ones to accomplish it, or at least come very close to it. Aged almost 15, Vilanova joined La Masía, where he started to shape what was the beginning of a prominent career. A technical midfielder, he idolised Schuster and Maradona, and hated having the pitch in poor conditions or the ball not sufficiently inflated.

In the space of only two weeks, he met at the academy none other than Josep Guardiola, who was three years younger than him. Together they formed an unforgettable tandem, as friends and also in the footballing world. Pep was the so-called rauxa, which in Catalan means a burst of activity inspired by impulse or instinct. Meanwhile, Tito was the seny, the common sense, the reasonable and mindful acting. Seny and rauxa, two frequently used but often contrasting terms, represented what Tito and Pep were. Opposed but inseparable.

Vilanova played in all categories of La Masía’s youth system, debuting with Barça B in 1988. There he played alongside the likes of Albert Chapi Ferrer, Guillermo Amor or Carles Busquets. Nonetheless, unable to break into the first team or get his senior debut, Tito was in a rush to make it to the First Division. As he explained in the book Senda de Campeones from Martí Perarnau, “I told Rexach and Cruyff that I only wanted to spend two years with the B. I was 21 years old and I told them that, if I did not get promoted, I would leave in two seasons. Over the years I have learned that I was mistaken, that I left too early”. Perhaps if he had waited a bit longer, Johan would have given him his debut and even left his imprint as a footballer at the club. But in 1990 he moved to UE Figueres in the Second Division, and in 1992 he finally reached the top flight in his transfer to Celta. He only spent three seasons there, before returning to the Segunda and retiring at Gramanet in 2002 for knee problems.

Right after that, he initiated his trajectory as a manager. He began with Barcelona’s golden Cadete B, which included Gerard Piqué, Cesc Fàbregas and Lionel Messi. With Joan Laporta’s arrival as a president in 2003, however, a huge restructuring took place by sporting director Sandro Rosell. Most youth coaches left, including Tito, who moved to Palafrugell, and later Figurers and Terrasa. But, ahead of the 2007/08 campaign, his close friend Guardiola called him again: he wanted him to be his assistant at Barça B. Vilanova had his best years as Pep’s right-hand man, first achieving promotion with Barça B to the Second Division B, and then starting an era with the first team.

❛ The important thing is to be direct. By being honest you save most of the problems with the footballers. It’s important that we all know that there are some minimum rules and of respect ❜

Tito Vilanova
in 2008, after the promotion to the first team

With the reserves and in the senior side, Tito stood out for his excellent qualities to analyse the rivals and for set pieces, as well as for organising the training sessions and advising Guardiola. Iniesta once said: “Tito is like a book that teaches a lot but never gets tiring”. A marvellous and calm teacher, Vilanova always instilled patience into the academy youngsters, as he didn’t want them to make the same mistakes he made as a footballer.

❛ We’re different. Winning alone is not enough: we have an ideal of youth team players and attacking football, as Barcelona’s culture demands. We have our faults but being cowards will never be one of them ❜

Tito Vilanova
on his partnership with Pep Guardiola

In spite of their differences, Pep and Tito complemented each other extremely well to form a memorable duo. Henry expressed that the latter was like “the mister’s twin brother”. Vilanova was never afraid of saying what he thought, as he was direct and clear, but always tried to stay away from the media focus. “It’s not good that the coaches are so protagonist. Mou is a manager that never speaks about football, and we don’t like that”, the Catalan said in 2010 right after Mourinho’s arrival to Real Madrid. Later, in 2011, José poked Vilanova in the eye in one of the Portuguese’s most shameful incidents, and in a commonly heated dispute of those Clásicos.

With Guardiola from 2008 to 2012, Tito finally fulfilled the dream he had since he was a boy: “When we were young, Tito and I wanted to conquer the world, and that’s what we did”, Pep revealed. If Josep was always in the spotlight, Vilanova was the genius in the shadow. They ruled the world, won titles and, above everything, created indelible memories in the football and Barça fans. “There’s people who wins, but not with 70% of the players being homegrown and playing like us. Many champions contribute with no homegrown talents to the national team; we have 11”, Tito voiced.

❛ You can expect the best from Tito. He’s more than skilled, the players know him…I think the club made a great choice. I was just the voice of the ideas Tito and I developed together ❜

Pep Guardiola
on Tito Vilanova being appointed as his successor

After the four most triumphant campaigns in Barcelona’s history, it was Tito’s time to succeed his inseparable friend. On 27 April 2012, in the same press conference in which Barcelona confirmed Pep’s departure – something which did not please Guardiola –, Vilanova was announced as his successor. Earlier, on 21 November 2011, he had undergone a high-risk operation for a tumour detected in the parotid gland, but he seemed to have recovered successfully and after only 18 days he had returned to coaching alongside Pep again. Nevertheless, over a year later, on 19 December 2012, it was announced that Tito suffered from parotid gland cancer for the second time.

❛ Your fight is our strength. If you’re strong and you have desire, we will wait for you, as long as it takes ❜

Tito Vilanova
to Éric Abidal, who had undergone a liver transplant and was recovering from the operation in 2012

Vilanova was always optimistic. His favourite sentence was the “Tot anirà bé” – everything will be fine –, and Barcelona completed the best first half of the league season in its history, with 18 wins and 1 draw, as the blaugranas ended up breaking their own record with a 100-point La Liga title. That said, when he was diagnosed with cancer, he was moved to New York for the treatment. He returned to his job at the beginning of April 2013, with his assistant Jordi Roura having taken over as head coach in his absence.

❛ Tito is a great football strategist. He’s hard-working, reserved and valiant, and has a direct, fluid relation with his players. He has a positive sense of human values. He has not only set an example for the sporting world, but for the world in general with his outstanding elegance ❜

Yet, on 19 July 2013, by mutual agreement with the club, Tito resigned as the Barcelona manager to aim all his efforts and energy at his recovery from his illness. “To all of you, members and fans of the club, I want to thank wholeheartedly for the outpouring of support and affection that I have been sent. I want to tell you that I am calm, strong and I face this new stage in my disease process with full confidence that all will be well. […] These are difficult times for my family, so I have asked the media for respect and to have understanding”, Tito wrote in his farewell letter on 20 July 2013.

❛ You should never get nervous about anything. What today seems important tomorrow isn’t so any more ❜

But, after suffering a relapse, on 25 April 2014 Tito Vilanova died at the age of 45. The calm, the mindful, the sensible man, was gone. “Seny, pit i collons” – common sense, pride and balls – was the message from Adrià Vilanova in his father’s funeral, a motto that Tito had used a lot. Tito’s daughter Carlota Vilanova said: “Our father was our hero, our role model, my first love, love which I felt even when I didn’t know what it meant yet. […] Of all the things he taught me in these 19 fantastic years, he forgot to teach me how to live without him. I suppose that neither him nor anyone could have ever taught me that, but if I had to choose the best lesson he gave me, it would undoubtedly be the one he led by example, that life is too short to waste time on things that don’t make you happy”.

It’s already 6 years since that fateful 25 April 2014. Time flies. Tito was gone way too early, but he’s never forgotten. Too many lessons to be learned from a person that made Barcelona human. Tot anirà bé. Everything will be fine. Tito, per sempre etern.